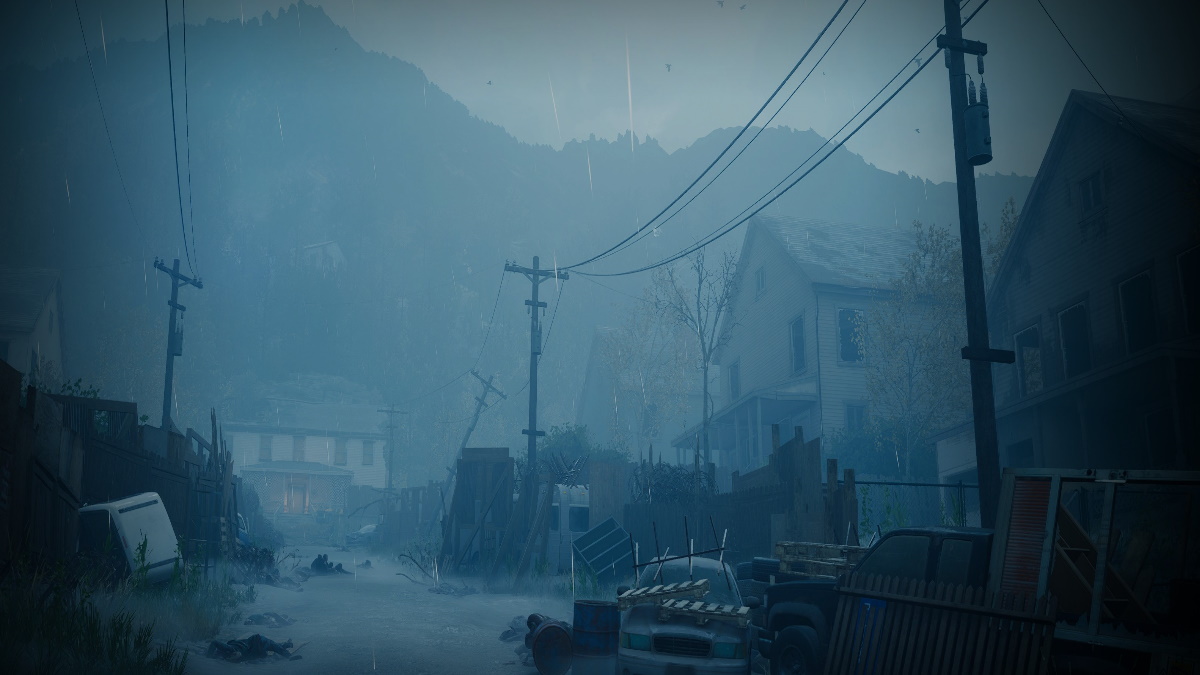 Blue Dog Hollow is the final section of Back 4 Blood’s first act. You’ll need to go through the countryside before reaching a mine. Here’s our guide to help you complete Act 1 – Blue Dog Hollow in Back 4 Blood. We’ll discuss missions such as Bad Seeds, Hell’s Bells, Abandoned, and The Sound of Thunder.

We’ll outline the steps and what you can expect in the missions included in Act 1 – Blue Dog Hollow in Back 4 Blood. Just remember that the Director will throw a few challenges along the way, too.

The Bad Seeds mission in Back 4 Blood takes place on a farm. There are a couple of things you’ll want to watch out. The first is the fog that’s blanketing the area. Straying too far from your teammates is very dangerous since the undead can pop up out of nowhere.

The second is the large Corrupted Nest that’s blocking the path. You’ll need to destroy the Nest Nodes before you can destroy the main nest.

Doing that will allow you to cross the river. Just watch out because slipping and falling to your doom will prevent your teammates from reviving you. The safe house is close by, so try to be careful.

Hell’s Bells has your squad starting in a tunnel that’s filled with abandoned vehicles. Use these to navigate the area safely since the infected will still need to climb up before reaching you.

At the end of the highway, you can activate the tow truck to move the obstacle. Beware since this will trigger a horde attack.

Past this point is a ravine that’s shrouded in mists. As usual, stay close to your teammates as you traverse this location. You should eventually reach the hilltop.

Watch out because this is a likely spawn location for the Hag. This special infected can gobble up a teammate, and you need to kill it as it’s running away. If you fail to do so, your teammate will end up dead.

Past the graveyard, you’ll find the church. Enter it and take out the enemies inside. Start boarding up the windows (similar to what you did in the library). If you see your other teammates doing that already, just take out the zombies that pop up. Once the location is fortified, the level will be completed.

Abandoned in Act 1 – Blue Dog Hollow is one of the most hectic missions in Back 4 Blood. You’ll start by exiting a gas station. Next, you’ll be trekking through a residential area that’s crawling with undead.

You’ll then reach an apartment building with a Corrupted Nest. Make sure to destroy the Nest Nodes, then crack open the main nest. This will let you pass through the doorway.

In the backyard, you’ll find another towing vehicle. Activate the crane to move the obstacle and do your best to eliminate the horde. Dash to the end of the street and get inside the large house. You’re not done yet because the entrance to the mines is just beyond this point.

The Blue Dog Mine is where things get more hectic. Countless zombies will pour in from the mineshafts. Some of them have explosive barrels that you can shoot cause those entry points to collapse.

You’ll be chased by the undead throughout, so do everything you can to survive. After this ordeal, you’ll see the main office. The safe house is on the top floor.

The Sound of Thunder

The Sound of Thunder mission is the finale of Act 1 – Blue Dog Hollow in Back 4 Blood. If you have someone like Karlee with you, we suggest farming this mission for more Supply Points. That’s because of the rather easy mechanics that you’ll need to do.

Basically, players need to carry a munitions shell and load it inside the howitzer. Interacting with the howitzer will cause it to fire and destroy Blue Dog Mine. After each shot, you need to take out the expended shell and load a new one.

Just keep repeating these steps until the mine has been fully collapsed. Ideally, you’ll only need one player to do this. The rest of the squad just plays defensively by taking out all the hostiles that appear. We also suggest using the humvee’s turret to annihilate the mobs.

With the completion of The Sound of Thunder, you’ll finish Back 4 Blood’s first act. Your adventure isn’t done yet since you still need to progress further in Act 2.