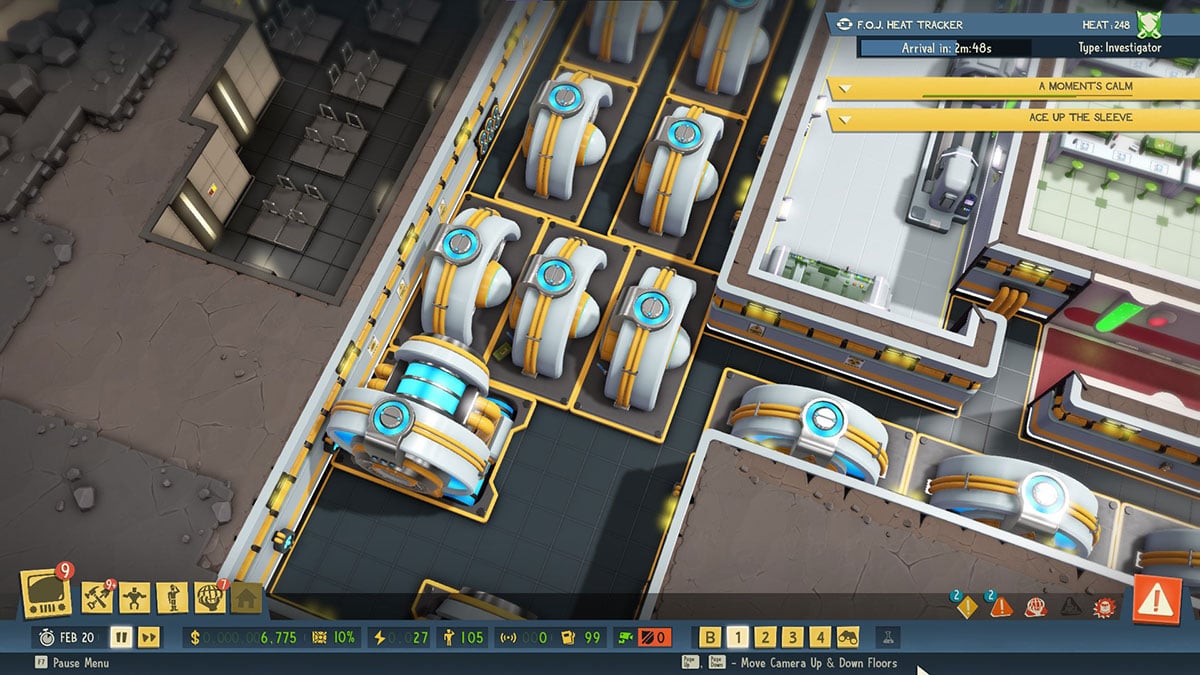 The first time you start a campaign in Evil Genius 2, you have no idea how larger each room needs to be and how much space for growth you should leave. Getting room sizes and your lair’s general setup wrong in the early game can cause you to waste a lot of time in the late stages as you move entire rooms to new locations. In this article, we’ve compiled the best base building tips to help you out when setting up your lair.

Set up your main corridor first

Corridors are the least exciting thing you’ll build in the game, but they’re essential for getting the flow of your lair between the main entrance and cover operation right. The first thing you should do is draw out your main corridor through the lair’s first floor. It doesn’t need to be huge, but you should leave enough space in the dirt around it to squeeze in all the rooms you need before you can access the other floors.

If you plan your corridors early, you can do so with creative traps in mind. Later in the game, you’ll be thankful you took the time to make it so awkward for agents to infiltrate.

Prioritize stairs as your research

It might sound silly, but you can’t place stairs and build on multiple levels in your lair until you’ve researched the technology. It’s in the second layer of the “Lair” research tab. Once you’ve got at least one Scientist and a whiteboard, focus on unlocking stairs. As soon as you’ve got them, you can shift certain rooms to their own floors and make more space for others.

Keep your vault small to start

The vault is where you store all of the gold you earn from scamming tourists and nefarious schemes. In the early stages of the game, you’ll be spending it so fast that you won’t need a vault deep enough for millions of dollars. Keep it small at this point, enough for $30,000 or so. This will allow you to build up enough funds for the most expensive research and objects for your lair without forcing you to compromise on room space elsewhere.

As soon as you’ve unlocked stairs, move your vault to a new floor. The further away from either main entrance it is, the more secure it will be.

Power requires the most space

The room that houses all of your generators needs to be the biggest in your lair. Over the course of the game, you’ll acquire more and more items that suck up your available energy. When the power goes out, so does your security, and that isn’t good for anyone. Make the room that will house your generators the biggest one you build at the game’s start.

When you’ve got stairs, move your power to the basement. Down there, you can pack the generators in tightly and build a dedicated space for all the Scientists who will maintain them.

The lab is the room that players tend to give the most space when they first build it. In reality, most research only requires a whiteboard, which takes up a tiny amount of wall space. You can squeeze six into a tiny space and still have room for another object. At the start of the game, build a small lab until you need to start using other objects for your research. When that time comes, you should have enough space to either build a new lab on another floor or reuse the space from a room you’ve relocated.

Dedicate an entire floor to your minions’ needs

Your minions need a place to store their clothes, sleep, eat, relax, and train. Several rooms meet these needs, but all of them can be lumped into the general theme of minion care. Put all of these rooms on a single floor. Make it easy for minions to finish work, grab some food, and then get some training in before they go to bed. This will allow you to keep the other floors free of these spaces, making for a far more efficient lair.

One of the most important objects in the game is the locker. This dictates how many minions you can have in your lair. As your lair grows, so too does your need for staff. Make sure that you efficiently place lockers so that you can squeeze as many minions into your lair as possible.

There’s a particular setup for your prison that will see you through to the endgame. Install five holding cells, two interrogation chairs, and a Brainwasher 2000. When the world’s agencies start to take note of your work, agents and soldiers will arrive in waves. The largest number of agents you’ll see is five, and you want to be able to arrest each one.

Once those agents are in a holding cell, you now have the ability to quickly drain them for Intel or turn each of them into a minion. What you do depends on your lair’s needs at the time. With this setup, though, you’ll never need more items or space for your prison for the rest of the game.

Create an airlock with traps

You can slow your enemies down by placing both a trap and a secondary laser door just inside the entrance from your cover operation. Agents will activate the trap, and then they’ll have to take a few seconds to actually enter your lair. At this time, you can tag them for arrest or death.

Placing some guard posts by your entrance, as well as at least one camera, will ensure that you catch every intruder in the act.