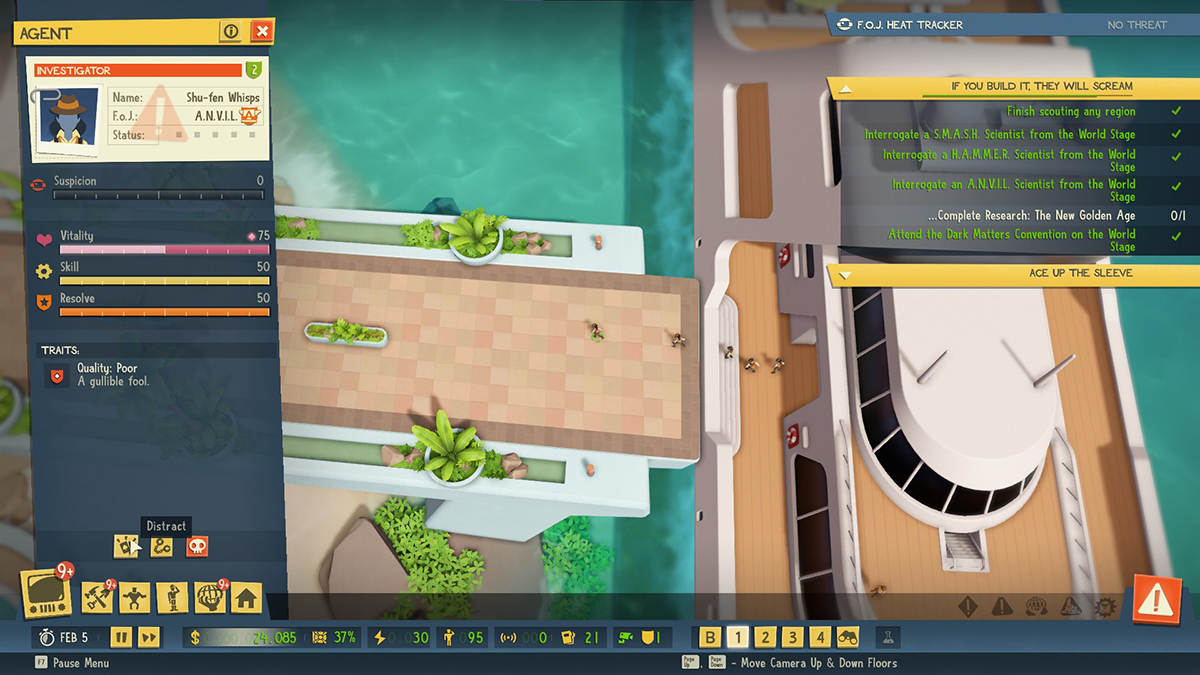 As your evil operation expands around the globe in Evil Genius 2, you’re going to start attracting the authorities’ attention in each region. In retaliation for your schemes, they’ll send agents out to investigate your lair and bring back intel that will aid them in taking you down. In this guide, we’ll show you how to distract those agents, preventing them from setting a single foot inside your inner sanctum.

The key to distracting agents is having a cover operation that drains their resolve before they get close to entering your lair. In the early stages of each campaign, you’ll be prompted to build your cover operation. The tutorial will only require you to purchase a few roulette tables and cocktail bars, but you’ll need much more going forward.

Sell all the old furniture that’s been left in the cover operation and use that money to purchase brand new items that will attract a host of tourists. The more distractions you have, the easier it will be to drain an agent’s resolve.

As agents make their way through your cover operation, their resolve will be drained when they’re distracted. Therefore, the more you have to keep them occupied between the front door and your lair’s entrance, the less likely they are even to try to get past your security measures.

Take note of the henchmen you recruit from time to time. While it might seem like a good idea to go for someone lethal who can protect your lair when those pesky agents do get inside, others can help prevent them even getting close to that point.

For example, Eli Barracuda has the Silver Tongue special ability. This allows him to talk to agents in your cover operation, damaging their resolve whilst restoring his stats. He can keep this up for hours, which is great if you have a group of four agents suddenly land on your doorstep.

At the bottom of the screen, to the right of the main UI interface for selecting the world map, build mode, and research is an overlay where helpful informational messages will pop up now and then. Occasionally, this overlay will alert you to the presence of enemy agents. When this pops up, make sure you head to the entrance and identify those agents. You can immediately select the distract label, which will highlight them for your Valet staff to focus their efforts on. This will drain their resolve faster than usual.

You can also keep an eye on whether any investigators are on their way in the top right-hand side of the screen. A timer will appear when one of the globe’s agencies is sending someone out, but you can use it to track when to tag an agent for distraction.