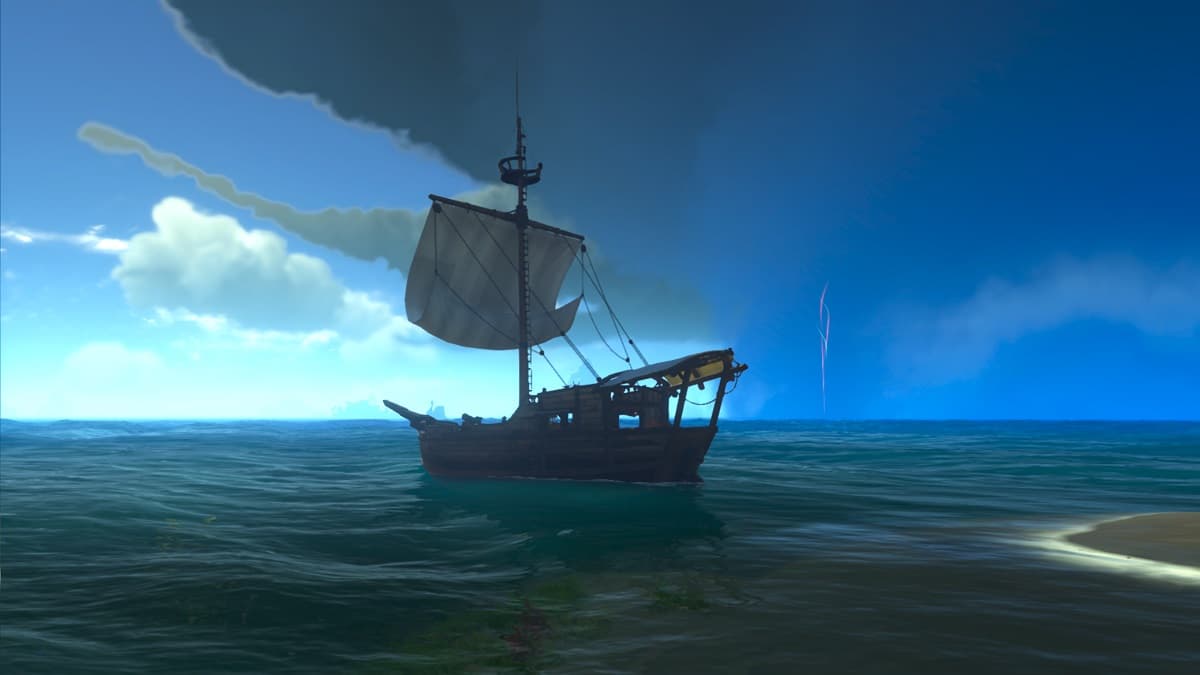 Sea of Thieves is constantly growing, changing, and improving as developer Rare continues making everyone’s voyages and plundering better in the open seas in their pirate action-adventure title. One of the coolest parts about Sea of Thieves is having the freedom of a pirate, but that freedom comes at a cost. It can feel a little overwhelming for anyone just starting out but once you figure a few things out and get started, it’s some of the most fun you can have in a video game. We have some tips that can help you find your sea legs quickly to make sailing the seas more fun while you explore everything Sea of Thieves has to offer.

1. Don’t drop your anchor when stopping at islands and outposts

It takes several seconds to raise your anchor when you’re leaving, and it’s good to be able to leave quickly if you need to. It’s good for making a quick getaway if another player shows up and tries to sink your ship and rob you of everything you’ve collected. If another player shows up and your anchor is already raised, then all you need to do is lower your sail and head in the opposite direction or into a storm.

2. Heading into storms can help you avoid other players when they’re in pursuit

Storms can be dangerous, but they’re mostly just a lot of extra work. Someone needs to be at the wheel pretty much the entire time spent in a storm. Crashing waves and strong winds will take the ship in every direction except the one you’re trying to go if no one is constantly at the wheel. The ship will also take on a fair amount of water, which will need to be bailed out sooner than later. If someone is chasing you to steal your goods and you head into a storm, they’re probably not going to follow you. You may have a lot of treasure, but you also might not have anything, and that’s what’s going to usually convince players to give up when you head into a storm.

3. Throw water through the grate when dealing with water in the lower decks

Whether you’re in a hurry and trying to save your ship from sinking or just cleaning up after a storm, use the grate above your head when tossing out water. The game registers it as being thrown out and so it goes into the ocean. This will save you from having to run up and down stairs, wasting precious seconds that might save your ship.

4. Use your harpoon guns to grab barrels floating in the ocean

Merchant ships and sunken ships result in barrels randomly floating throughout the seas. It may seem like you need to raise your sail and jump out to grab their contents, which would rarely be worth it due to all the risks involved. Sharks, other players, and sudden storms aren’t worth some extra gold or supplies. Almost all of those will lead to death if you’re floating in the ocean looking in a barrel. Instead, use your ship’s harpoon guns to bring the barrels to you. You can check the contents, take what you want, and then drop them back into the ocean.

5. If you hear a loud humming sound, then there’s a mermaid statue nearby

If you’re exploring on a beach or you’re aboard your ship and hear a loud humming sound, then it’s time to start looking nearby. The sound indicates a nearby mermaid statue, which can be destroyed for valuable loot that’s hidden inside. If you’re on a ship, then stop as soon as you can (by raising your sail) and look down in the water below. If you’re on a beach, then check in and around nearby water. The valuables they have can be sold to any Trading Company for gold at an outpost.

6. Loot outposts before leaving for adventures

Whether you’re just starting your session or have just finished turning in quests and selling treasures, always loot outposts before you head back out to open waters. Barrels outside the tavern and on docks contain food, cannonballs, wooden planks, and everything else you may end up needing while out looking for treasure. Put supplies in your ship’s barrels until they’re full. Don’t rely on your inventory alone because it’s not very big. You can speed the process up by buying an empty storage crate from a merchant or save the time altogether and just buy supply crates from the Merchant Alliance.

7. Buy the Plunder Pass if you play regularly

The Plunder Pass is essentially a battle pass for Sea of Thieves, and it’s worth it just as much. As you play and level up, you earn items from the Pirate Emporium. There’s some cool stuff in there that you won’t want to miss if you’re someone who loves the game and plays on a regular basis. If you’re playing regularly, then you’re going to unlock stuff consistently too. You unlock gold, doubloons, and some cosmetics with just the free version of it, but there’s much better stuff in the paid Plunder Pass. You can also buy it at any time and snag goodies from earlier levels, so don’t worry if you need to wait until payday or forgot to buy it earlier. The pass is only 999 Ancient Coins, which is the paid currency in Sea of Thieves. However, you earn Ancient Coins from leveling up the Plunder Pass too, so you can make sure to save at least 999 of them and then buy the next season’s pass without spending actual cash.

8. Don’t skip the tutorial on the Main Menu

Sea of Thieves didn’t launch with a tutorial, but Rare added a really good one in the December 2019 content update. It’s called Maiden Voyage and can’t be accessed in the multiplayer areas of the game. The mission and area feature the Pirate Lord, the legendary pirate that discovered the Sea of Thieves. In this mode, he teaches you all of the basics, including using a map, cooking, fishing, and much more. You can learn later on your own if you want, but this is a great way to get started and there are some good items and rewards for completing it, so there’s no reason to skip it. It can be played right after you create your character, but it can always be accessed on the Main Menu. It’s also replayable if want to go back and learn more about the Pirate Lord.