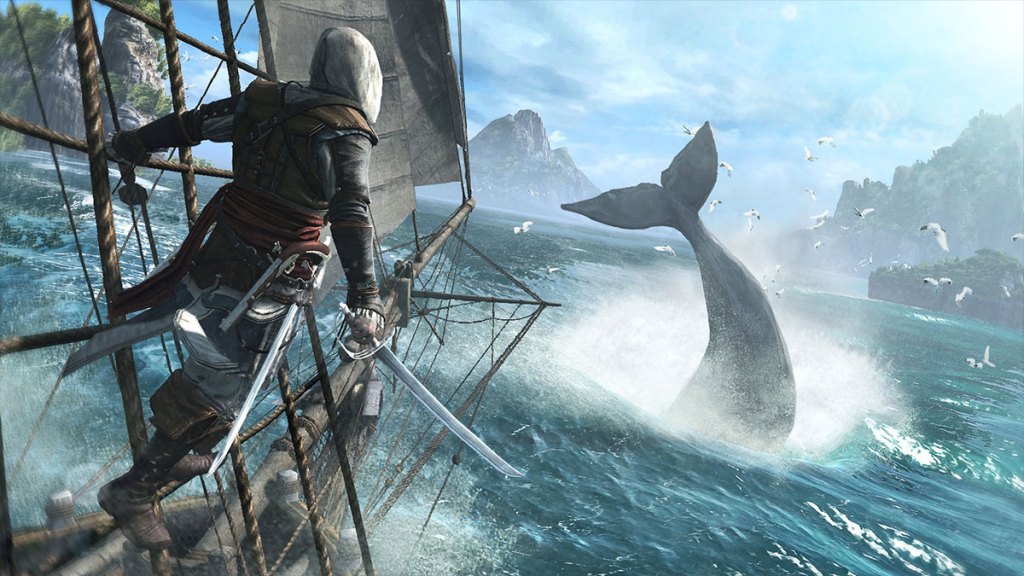 Who doesn’t love pirates? There’s an alluring quality to the lifestyle for us landlubbers. The freedom, the action, the mystery — there’s a lot to be excited about. Video games can give us both simulated and stylized versions of the pirate life, but some do it better than others. Here are the 10 best ones out there, listed in alphabetical order.

Assassin’s Creed III might have introduced ship combat to the series, but Black Flag is where the swashbuckling really came into its own. Black Flag’s protagonist is Edward Kenway, a sailor who has an entire array of Caribbean islands to explore. You can get your pirate quests on top of all the usual bloody assassination business.

We had to have at least one VR game on this list — how else would you feel like you were really steering a pirate ship? With Furious Seas, you’ll command your crew, attack other ships, and seek bounties all from an intense first-person viewpoint. Those little detached hands might be reminiscent of Ubisoft’s Rayman, but this game is anything but cartoony.

The Legend of Zelda: The Wind Waker

It might not put you in the shoes of pirates, but Wind Waker definitely features a bunch of buccaneers during Link’s journey across the ocean. Captain Tetra is a key part of the story, and the Triforce quest (even if it’s not the most exciting part of the game) was literally about searching for sunken treasure like pirates do. Any crew would be lucky to have Link climb aboard.

Lego Pirates of the Caribbean

Lego Indiana Jones made the list of best games from that franchise, so it’s only fitting that Lego Pirates of the Caribbean finds a place here. No other game on this list can put you in the shoes of so many different pirates either. The roster includes so many classic characters from the films, from Jack Sparrow to Hector Barbossa to Davy Jones.

Ratchet and Clank Future: The Quest for Booty

This is a similar case to Wind Waker, where the game isn’t necessarily about being a pirate. Even so, this Ratchet and Clank side story has plenty of swashbuckling spirit. The short story sees our dual protagonists taking on a band of brigadiers, and pirates have continued to be a part of the series ever since. This was also one of the best double entendre titles in the whole series.

Oh, did you think pirates only sailed the seas on rickety wooden ships? Rebel Galaxy takes all the same concepts — smuggling, trading, and tangling with rival crews — and moves the action to outer space. This is more than just a space pirate game though. You’ll also have to be diplomatic with the various alien races that occupy the galaxy as you become part of the interstellar economy.

Sea of Thieves has become the de facto pirate game of the last few years, largely thanks to its availability on Game Pass for Xbox and PC. You’ll encounter plenty of other players across the high seas, and you can captain a ship of your own name. It’s also the only service game on this list, having been updated over the years with a number of new time-limited adventures and seasonal events.

The Secret of Monkey Island

There are plenty of point-and-click adventures out there, but few are as revered as The Secret of Monkey Island. The 1990 LucasArts game got a remaster in 2011, giving it a fresh coat of paint and some modern quality-of-life improvements, but it’s still the same old story of Guybrush Threepwood seeking to become a pirate. Return to Monkey Island is darn good, but you just can’t beat the original.

This whole lane of pirate games began with Sid Meier’s simulator way back in the late 80s, and the 2004 remake brought the original vision into the 21st century. This sim tells the tale of a young man seeking to find his lost family on the high seas. Doing so means engaging in sailing, sword fights, and a whole bunch of plunderous minigames.

Let’s finish with one of the broadest pirate experiences you can get. The Tropico series is about managing settlements, economies, and every other aspect of real-time strategy. Tropico 2 specifically makes it all revolve around pirates. You’re not just running a ship here — you’re trying to keep an entire town of pirates happy.