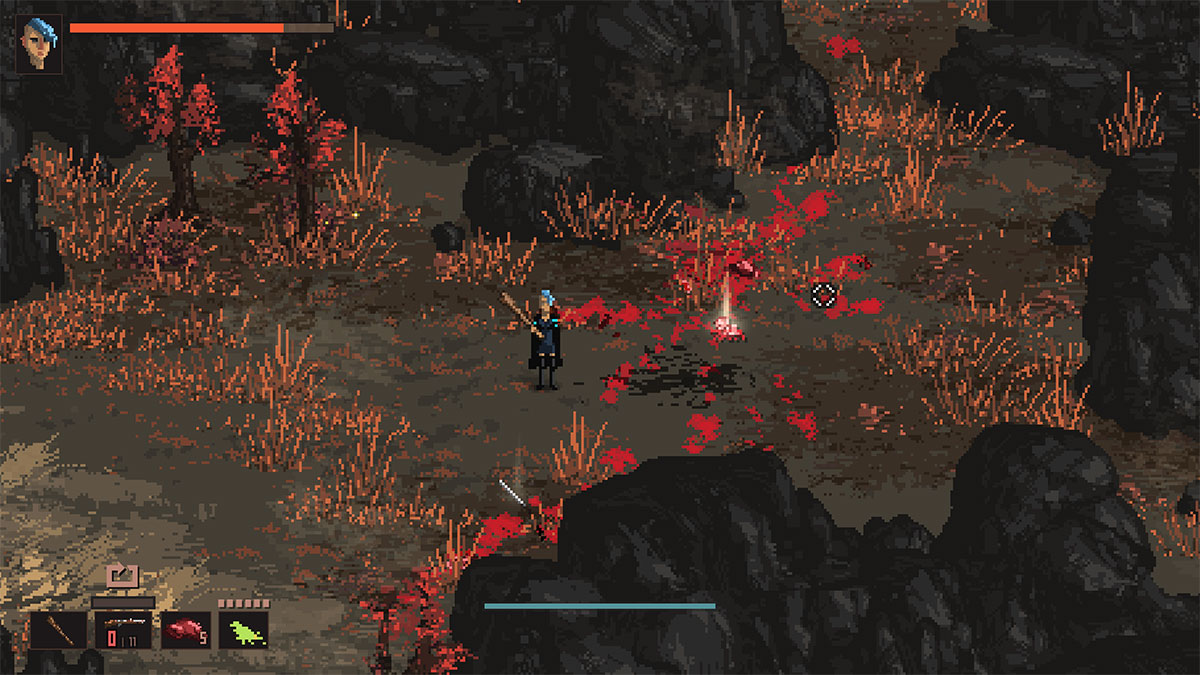 Death Trash is a tricky game to get your head around at first. The world is huge, scary, and filled with stats and skills that you probably don’t understand. Even once you think you know what you’re doing, there’s more beneath the surface that you’re probably missing. This guide covers some of the more advanced tips and tricks that will help you in your time with this game.

Quite often in Death Trash, you’ll find yourself with no option but to take on two or three enemies at a time. The problem is that this can be a death sentence. Enemies pack a huge punch in this game, so you need a way to even the odds. In certain areas, you’ll see black devices on the ground with red flashing lights — these are mines. Once you have the attention of a group of enemies, run back to a mine and skirt around it. This will lure your foes into triggering it, causing it to explore and most likely kill all of them. All you’ll have to do then is clean up the mess.

If you’ve put some points into the Animalism Skill, then you can probably tame the Fleshworms that slither around almost every area in the game. Once you’ve tamed them, you’re able to drop them and have them attack your enemies. Alternatively, you can kill them and eat their meat. It might sound brutal, but if you’re in a pinch and need a health boost, their meat is the freshest.

While you’re using stealth, you’ll use up precious Focus Energy with every step. What you might not know is that you can recharge that Focus Energy without revealing yourself. Stand still while an enemy isn’t looking and wait for the meter to replenish. After that, you can continue sneaking through an area undetected. You’ll only risk being spotted if the red cone of vision from an enemy settles over you for too long.

You can sell Puke

One of the more unique aspects of Death Trash is a dedicated vomit button. Press it, and your character will hurl up whatever remnants remain in their stomach. You may not have known that you can pick this up and sell it to merchants. There are even NPCs in the world who will actively vomit in front of you. It sounds disgusting, but a good source of cash is picking up the Puke these NPCs leave behind and selling it to merchants. It requires very little work on your part and gets you closer to owning some shiny new Implants.

Backstab enemies for a chunk of immediate damage

Usually, while you’re sneaking around in Death Trash, you won’t try to get too close to enemies. Stealth is the perfect way to avoid conflict. However, you can actually get close to certain enemies and hit them with a Backstab. Just like in games similar to Dark Souls, this will deal a huge amount of damage before the fight has even begun. It makes unavoidable encounters so much easier, allowing you to wipe out at least one enemy before their friends join in.

It might seem like all the enemies in Death Trash are wandering around aimlessly, but they’re not. They each have a purpose, and most have a patrol that they’ll religiously stick to. You can use this to your advantage. If you can see multiple enemies in a room or area ahead, enter stealth and observe them. You’ll notice opportunities to draw one enemy away from their friends or simply take them out before anyone else turns up.

Talk to everybody before moving on

Some areas in Death Trash are small, but others are massive and packed with NPCs. Make sure you don’t leave an area before you’ve spoken with everyone. Some NPCs will have their names displayed as “???” to indicate that you can have an important conversation with them. However, there are plenty of NPCs in out of the way areas that can give you quests or important items. Pay attention to what each one says because you’ll often be given a clue to something without getting a quest marker.

You’ll even find NPCs living underground, hiding away from those on the surface. Search every nook and cranny that this game has to offer. There’s always something to be found — you just have to work out how to reach it. Watch out for spiders, though — they’ll pin you to the ground and kill you before you can do anything about it.