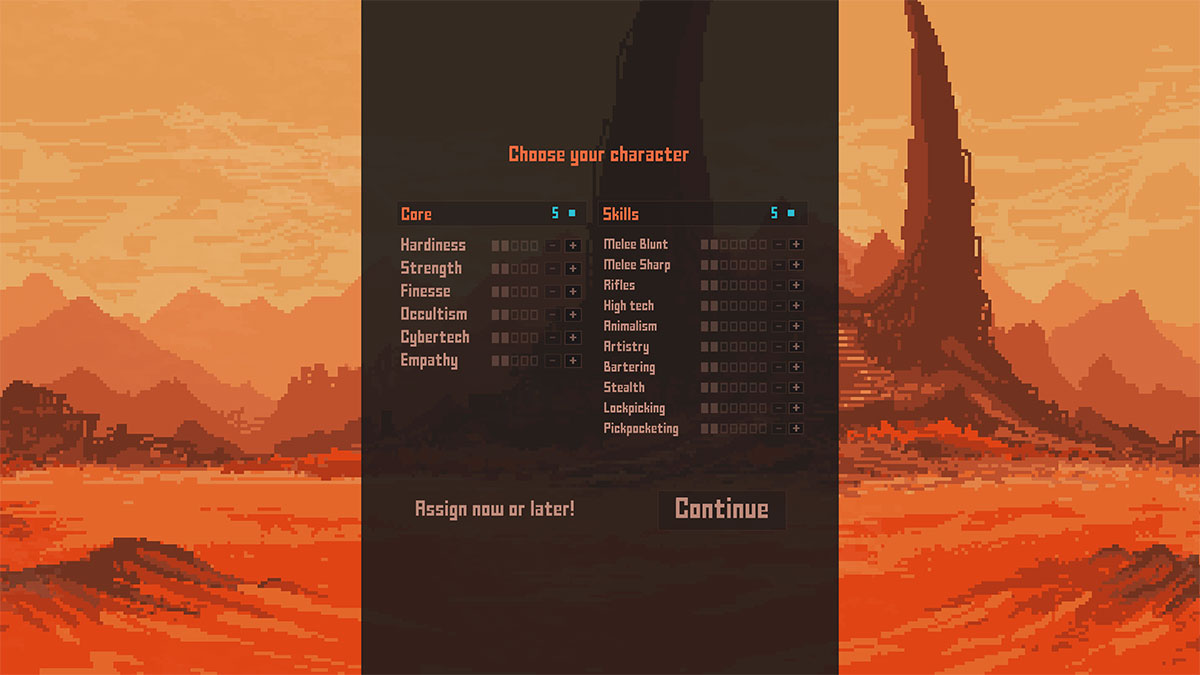 Death Trash is a unique RPG with a completely original setting. The world is an extremely different place from the kind of post-apocalyptic ruin you’d expect from the Fallout universe. As such, the skills your character can have are just as unique, and they make little sense at first glance. This guide covers what each Skill does to help you make a sensible decision when assigning skill points.

The skills in Death Trash are split into Core Attributes and Skills. We’re going to cover both sections and the options within them individually.

Your Core Attributes are the character traits that can inform some of your skills. They are also what will determine your abilities in certain situations.

This is your health and resistance. The more skills you put into Hardiness, the higher your health bar will be, and the less damage you’ll take from enemies.

This Core Attribute is directly linked to your ability to use melee weapons. The higher it is, the more damage you’ll deal with said weapons. Pushing your Strength higher will also give you a better chance of landing critical hits with every melee attack.

The official description of this Core Attribute doesn’t even make sense to those who have played Death Trash. Part of it is increasing your Focus Energy, allowing you to use abilities — the Death Trash version of magic — more frequently. However, the real reason to put points here is so that you can commune with the meat. This allows you to talk to the meat growing around the world, though you’ll have to sacrifice useful points from elsewhere.

You can’t use any Implants or Tech Abilities without some points in Cybertech. That’s all this allows you to do. The more points you have, the more advanced the Tech and Impacts you can use.

You should think of Empathy as the charisma stat for any other RPG. It opens up new dialogue options with NPCs, granting you information and quest paths that you wouldn’t have had otherwise.

Skills are what you’ll be leveling up most frequently. These have a much more focused impact on your character and are where you’ll customize them to better suit your play style.

This affects how much damage you deal with blunt melee weapons, such as bats and bits of wood.

With this Skill, you’ll push up the damage you deal with sharp melee weapons like swords, knives, and other pointy things.

This Skill specifically increases the damage you deal with rifles. It doesn’t change the damage dealt with other weapons, so only put points into it if you have a rifle or plan on using one a lot.

With points in this Skill, you’ll deal more damage with high-tech weaponry. This isn’t your run of the mill stuff like shotguns. It’s more advanced than that and invasive. It increases the damage your Implants, and Tech Abilities will do.

With points in Animalism, you’ll be able to tame wild animals. In the early game, this means that you can tame and capture the Fleshworms that are seen squelching around the land. You can kill them and eat their meat later or drop them and have them attack enemies.

This is an incredibly specific Skill that relates to certain NPCs in the world. You’ll unlock new dialogue options that may or may not be useful. It’s best to save putting points into this Skill for a second playthrough.

Bartering is a simple Skill — the more points you have, the better the prices you’re offered.

While this Skill doesn’t increase the time you can be hidden for, it does extend the time it takes for an enemy to spot you while you’re cloaked. That’s hugely important for sneaking through areas and avoiding combat altogether.

Another straightforward Skill. The more points you have here, the better you are at picking locks. The only issue is that you need a lock pick before using it, making it a useless skill at the start of the game.

Finally, we have Pickpocketing. As you might expect, this skill increases the likelihood of a successful pickpocketing attempt. You might need this for quests or to help you get past enemies undetected. It’s risky, but for a stealth build, it’s essential.