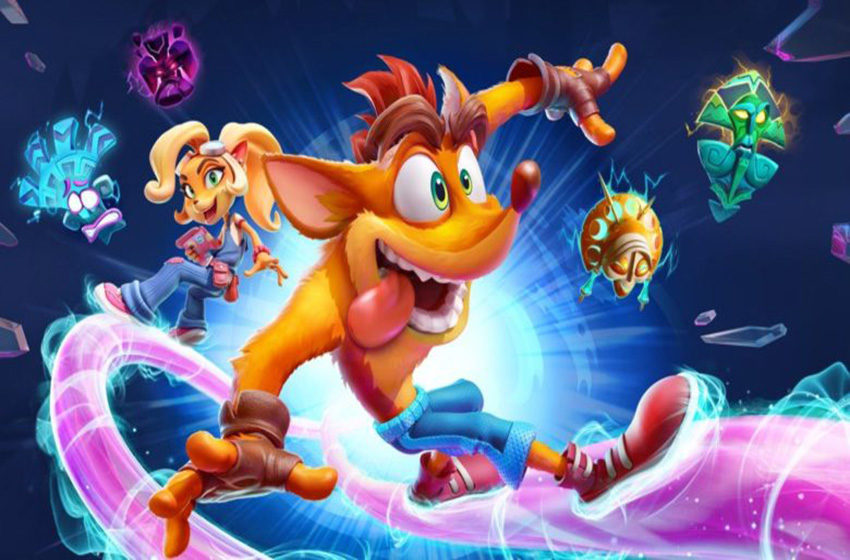 Crash Bandicoot 4: It’s About Time brings back everyone’s favorite orange marsupial in his first brand new mainline game since Mind Over Mutant in 2008. Coming October 2nd PlayStation 4 and Xbox One, the game is developed by Toys For Bob, the team that handled the Spyro Reignited Trilogy and gave development help on the Crash Bandicoot N. Sane Trilogy. All we have seen on the game so far is a minute and a half trailer that you can watch below, but let’s go over everything we learned from what we have seen in that trailer.

Watch four minutes of Crash and Cortex gameplay from the following video.

The beginning of the video looks like a traditional Crash Bandicoot level. The player starts running through the linear level avoiding enemies and smashing crates. What is most noticeable in the first 20 seconds is we see a crate with some blue stuff (but a different blue look than some other crates we will get to in a second) on it that the player purposely avoids. Whether this is a new crate or just a lighting effect, we do not know, but the fact that it was sitting right there and the player avoided it leads us to think the former. We should also point out that the levels will keep track of the crates you smash, but there is a set amount of wumpa fruit to collect. It also appears that instead of lives needed to keep playing, the game will keep track of how many times you die in a level in the top right, so there may be no game overs. However, later we see a lives counter for Cortex, so it is possible the lives were turned off purely for this preview footage.

At 34 seconds, we also see a crate with a golden wumpa fruit on it. This could potentially act the same way it does in Crash Team Racing, where you have to chase the fruit down quickly, but again, the player avoids it, so we do not know.

Soon after that, we get our first look at the new mask gameplay (that you can read about in the original article below). One of the masks featured in the reveal trailer appears at a set location in the level. When Crash puts it on, he gets a new suit and a power to “phase the world.” We see the player using this power to phase in and out nearby crates, essentially leaving them as a ghost form when they are in their blue state. Immediately after, we see Crash start grinding on a vine while phasing crates and mushrooms hazards in and out as he proceeds. Once Crash reaches the end of the vine, he immediately goes back to normal, which makes us think that the masks are only usable in certain areas of each level.

Following the grinding, we get a good look at a runaway sequence involving the tyrannosaurus rex from the reveal trailer. One of the more noticeable things about this area is the look on Crash’s face instantly switches to fear to express him running for his life, which is a nice touch. This is all we see of Crash, but the level appears to go on after Crash escapes the dinosaur.

Next, we see Dr. Neo Cortex gameplay and immediately see the blockify power he has with his weapon that we saw in the reveal trailer and his dash. You will need to time your shots right to turn enemies into blocks, and we also see that Cortex will not have a double jump, as he cannot reach a crate above him after breaking one that was supposed to be used to bounce him up to it.

Next, we see Cortex use his weapon to blockify an enemy and then immediately shoot it again to gelatinize it and turn it into a trampoline. It appears that just holding the jump button will let you jump higher, so there is no need to time your jumps on the gelatin.

Soon after, we see Cortex come into contact with an extra life crate, and after picking up the golden looking fruit inside, he gets an extra life. This is interesting because there was no counter for lives in the Crash gameplay, but the death counter is still here in Cortex’s gameplay.

Obviously, the player of this game has died a few times, so there is a cut to where they have been given Aku Aku to help them through the area they are having trouble with. This is not new for the series in particular, but it is odd to see Aku Aku follow Cortex, specifically talking about killing Crash and Coco. There is a chance they purposely swapped Uka Uka out for Aku Aku because we have yet to see the evil mask at all yet. Something could be potentially different with him.

After reaching the end of this area, Cortex blows up the platform area in front of Crash and then perspective is switched to Crash, so it seems you will be switching between characters as you progress through the level rather than each full level being dedicated to one character like in Crash 3: Warped.

While the N. Sane Trilogy focused on bringing the original models more in line with current day standards, the character designs in Crash 4 are a little more cartoony. They do not diverge from the models a ton, but the difference is quite noticeable the more you look between them.

We are ignoring everything that released after Crash 3: Warped

At the end of the trailer, the mask asks Coco and Crash how many times they have defeated Cortex before, with Coco answering three. In a fourth-wall-breaking reference to the less popular mainline games throughout the 2000s, the mask says, “Funny, seemed like more.” This lets us know that this journey picks up right where Crash 3: Warped ended, and thus retconning games like Wrath of Cortex, Twinsanity, and more.

Cortex is back and hints at the story

At the end of Crash 3, if you collect all the power crystals, Cortex and Uka Uka are pulled into a time vortex that leaves baby versions of Cortex and N. Tropy fighting over Uka Uka in what could potentially be the Time of dinosaurs, or even sooner. From what we can gather, Cortex grew up again in the past and forged a new time machine to come back to the present.

While Aku Aku does not appear in the trailer, we have seen the art of him flying alongside Crash. However, near the end of the trailer, we see the mask asking the question flying with Crash, although it seems that they are more trying to escape rather than help Crash.

The beginning of the trailer shows a vortex of souls that look too small to be full bodies spinning around a creepy looking tree or rock. This could hint that Cortex is capturing these masks for his plan throughout time periods, but that is merely speculation.

Going back to the new mask, there are multiple that we see in the trailer, and when put on, they give Crash new powers. One is named Kupuna-Wa and slows down time, making it easier for Crash to platform through hazards, and another named Ika Ika lets him walk on the ceiling. We should also note that there is a section of walls with arrows on them that lets Crash run along walls. We do not see what the mask at the end does, so we are guessing the player will have quite a few new moves this time around.

Taking a page out of Sonic the Hedgehog’s book, Crash can now grind on rail-like surfaces. We see him grinding on a purple stream of energy, a vine, and falling below a rope and sliding along it with his hands, so it seems you can control which side you grind along.

The levels we have seen

Like Crash 3, this game will see you traveling through Time, giving a variety of new environments. From the trailer, we have witnessed themed levels of

The chase sequence at the end may be a new environment as well, but we are guessing it has to do with the Día de Los Muertos level.

You can play as Cortex and Coco

We see Coco jumping along with cars in the futuristic city level, which is expected we would play her in this game. However, we also saw a brief glimpse of Cortex gameplay in the dinosaur environment where he shoots what looks like a mask to turn it into a platform for him. This could hint that Cortex helps us at some point in the story for whatever reason or that he is running from Crash as just before that we see Crash in the same environment. That situation is entirely up in the air at the moment, but this trailer paints Cortex as the main villain of the game again. With no sign of Uka Uka or N. Tropy, anything could happen.

We see N. Gin is back with a new boss fight that revolves around dodging her soundwaves in a pathway that seems to be a homage to Guitar Hero. The environment here is like a rock concert with her drumming and her robot outputting the soundwaves through subwoofers.

If you pre-order the game digitally, you get access to new skins for Crash and Coco called “Totally Tubular.” This may hint that there will be various skins you can get, most likely through microtransactions. When Crash puts on a mask, he gets a suit themed around that mask, so they may go even further with customizing the characters.