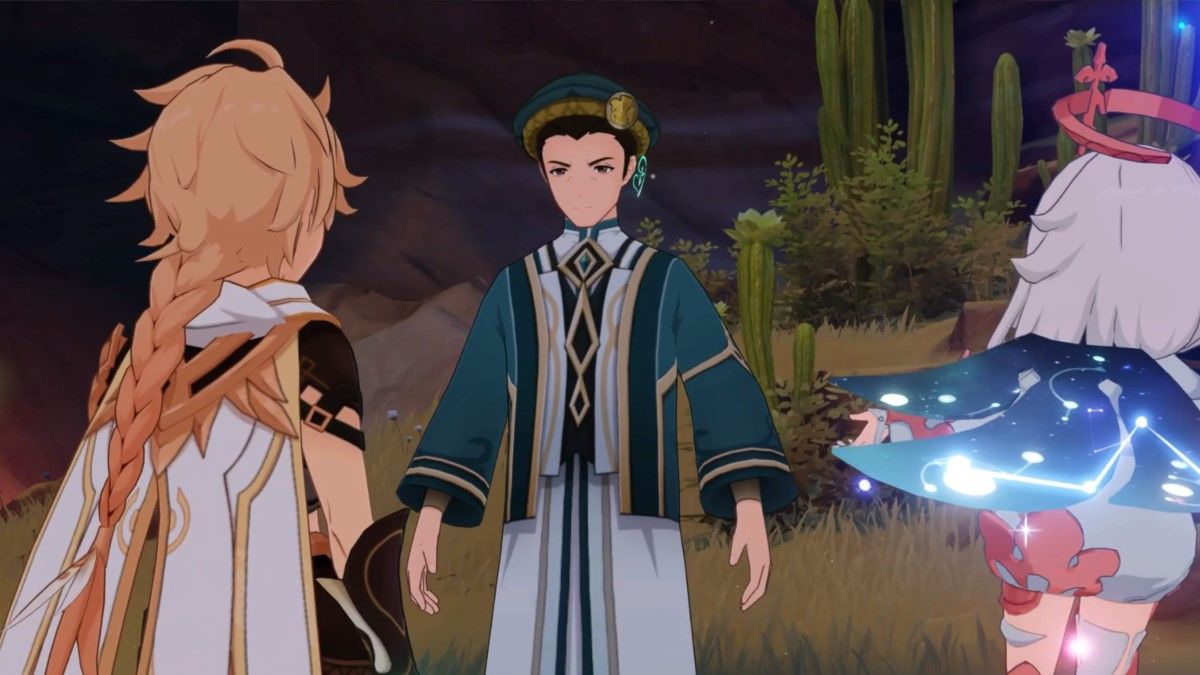 In Genshin Impact, Dual Evidence is the first quest in the Old Notes and New Friends World Quest series, which unlocks after you complete the Golden Slumber World Quest series, and after one daily server reset has occurred. In other words, to unlock Old Notes and New Friends you need complete Golden Slumber, then wait a day or so. Start the Dual Evidence quest by approaching the Statue of the Seven near Aaru Village, which will trigger a conversation with Kalantari. Follow the markers into the village and speak to Soheil.

Related: Genshin Impact: Wandering Evenstar – how to get it, stats, and ascension materials

How to go to the location indicated by the stone slate

Now when you press the button that would usually highlight your next objective, the Scarlet Sand Slate screen opens. Go to the “Delving Deeper” tab and select Duat Hall. Head to the Duat Hall, which is just outside the front of The Dune of Magma in the southwest corner of the desert. Go inside the Dune of Magma and use both of the book-like devices on the right to remove the forcefields. Go up the stairs on the right and release the floating cube, then wait for the fan to stop and follow the cube down the hole. Release it again, then follow it back to the first chamber until it lights up the large pedestal and opens the door.

Pick up the floating triangle, then drop down the hole and place the triangle in the square. Touch the cell, then approach the four torches to make them whole. Next, switch to a Pyro character and light each torch. Open the Remarkable Chest, then drop down another hole and follow the Seelie all the way to a large cavern. Activate the Teleport Waypoint, then go through the doorway on the east side. Follow another Seelie to another Teleport Waypoint, then use the book-like device to open the door.

Go to the Teleport Waypoint in the large chamber you just passed through (on the map it’s between The Mausoleum of King Deshret and The Dune of Magma). Go towards the exit and drop through the hole in the stonework to the right. Follow the tunnel, drop down a hole, and release a floating cube. Follow it into the flooded chamber until it lights up its large pedestal.

Take the passage to the west and follow it to the next chamber. Move the triangle on the southeast side to the square on the south side, then touch the cell and approach each of the spectral torches to make them solid. Light each torch with a Pyro character, then release the floating cube and follow it back to the Place of Rebirth.

Take the passage to the north and turn right at the intersection (down the stairs). Move the cell in the southwest corner, then move it again. Release the floating cube and follow it back to the Place of Rebirth.

Teleport to the waypoint between The Mausoleum of King Deshret and Khemenu Temple, then follow the passage west. Go south, then open the door in the room with a fan. Glide down the hole, then use a Geo elemental attack to destroy the rocks in the corner, and rotate the cell to open the door.

Glide down into the lower part of the chamber with the broken bridge, then follow the tunnel west and down. If you haven’t already, use your stone slate to set waypoints, and follow them through the mine, all the way to Sekhem Hall. Release the floating cube, and follow it to the end of the hall so that it floats down to the bottom, but don’t follow it down there yet. Instead, follow the stone slate marker into the passage in the east wall, then all the way north where there’s a floating cube to release. Follow that cube until it stops at a pedestal, then go through to the next room and turn the fan off, before coming back and releasing the cube. Follow it down to the next level, and leave it in its pedestal until you’ve defeated the two Primal Constructs in the next room. Now release both cubes and follow them both to the Place of Breath.

Go back down to where you fought the Primal Constructs and go through the door to the north. Activate the elevator, then jump off it at the next level up (it won’t stop here). Release the floating cube, then follow it to the Place of Breath until it lights up its large pedestal.

Now go back to the ledge to the left of where you came into the bottomless chamber and release the floating cube. Drop down after it, but be careful not to touch it until after the fan has stopped. Release it from the next pedestal, then keep following it and releasing it until it lights up its large pedestal.

Go back to where you started again, and release the floating cube to the right of the way in. Keep following it and releasing it (watch out for fans) until it lights up the final large pedestal.