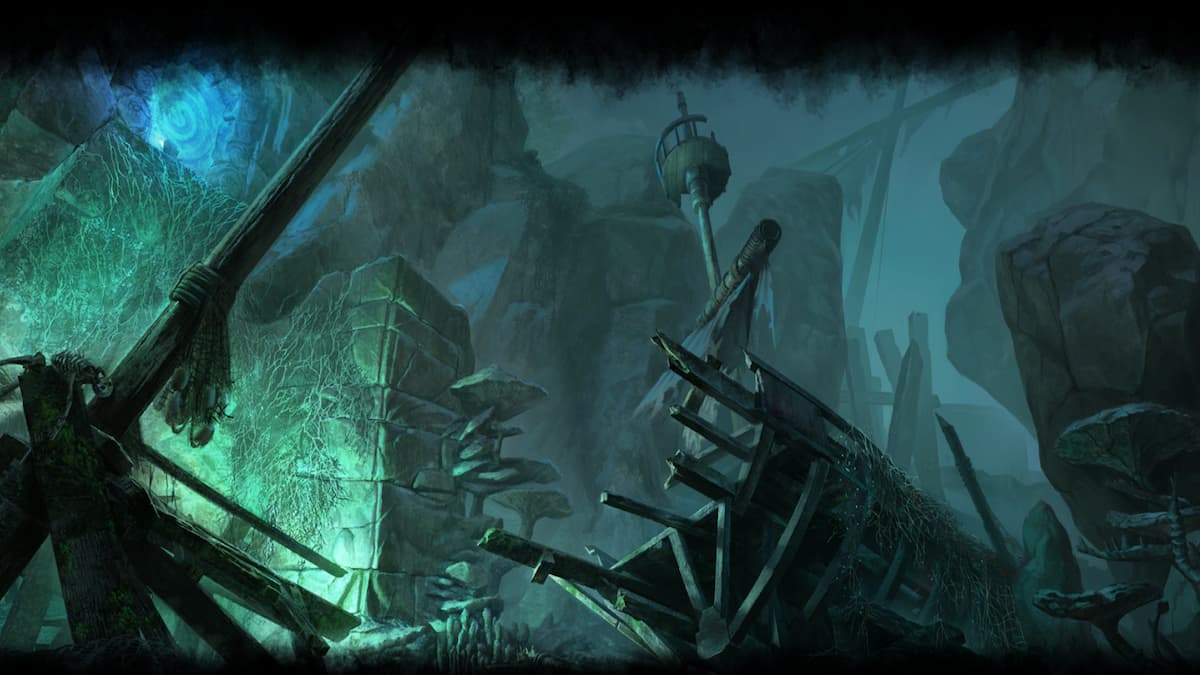 As with most expansions, there are two Public Dungeons in Elder Scrolls Online: High Isle: Crimson Coin and Ghost Haven Bay. Both dungeons are a step above Delves in terms of difficulty, and come with their own unique achievements to boot. Ghost Haven Bay is a little tricky to navigate, so we’ve got a full guide on how to collect the two achievements in this Public Dungeon.

Ghost Haven Bay is split into two maps, the outside and the catacombs. We recommend starting out by clearing Razor Fangs first, then moving clockwise down through Hadoiid and Captain Altair to save time navigating this area. Here’s how to earn the two achievements for Ghost Haven Bay: Ghost Haven Bay Group Event and Ghost Haven Bay Conquerer.

Hadoiid Broodmother will attempt to stick close to you, swinging her heavy weapon around for some serious physical damage. She will occasionally summon whirlpools that will slow you down and deal constant ticking damage. Combined with her melee swings, the damage can be very painful for non-tanking specializations. At 66% and 33%, she will enter an invulnerable state and summon several waves of adds, while occasionally summoning AoE attacks. Dispatch the adds to remove her shield and continue the fight until you’ve beaten her. Completing this encounter will reward you with the Ghost Haven Bay Group Event achievement.

The following bosses will grant you the Ghost Haven Bay Conquerer achievement when slain:

This boss summons a poison trap that will damage and slow you over time, but can be dodged out of. In addition, he will summon geysers of poison that knock you up into the air and deal damage over time, before following it up with a body slam.

Altair will summon a static orb that fires random electric line AoEs — while these do hurt, the real pain comes from the heavy melee attacks and leap attacks that Altair performs whenever you try to kite him around the arena.

You will need to continue into the second map of the dungeon to find the rest of the bosses.

Fauvette summons a totem that roots the player to the ground and deals damage over time. Additionally, she will summon adds that explode after a few seconds if they are not slain in time.

Tuvacca will summon a fiery totem that not only deals damage over time, but grants a shield to Tuvacca as long as he is standing inside of it. He hits very hard, so you must kite him out of the totem ranges and be ready to block any of his wind-up strikes.

Marley summons a totem that fires off electric line AoEs, and will occasionally crash into you with a lightning dash. The totems do stack, and you can find yourself getting hit by many attacks in rapid succession, so swapping to them to take them out is a valid strategy.

Grab the Skyshard pictured above and head on out to finish your High Isle adventures. Afterward, you can find the rest of the Skyshards or tackle the other Public Dungeon, Crimson Coin.