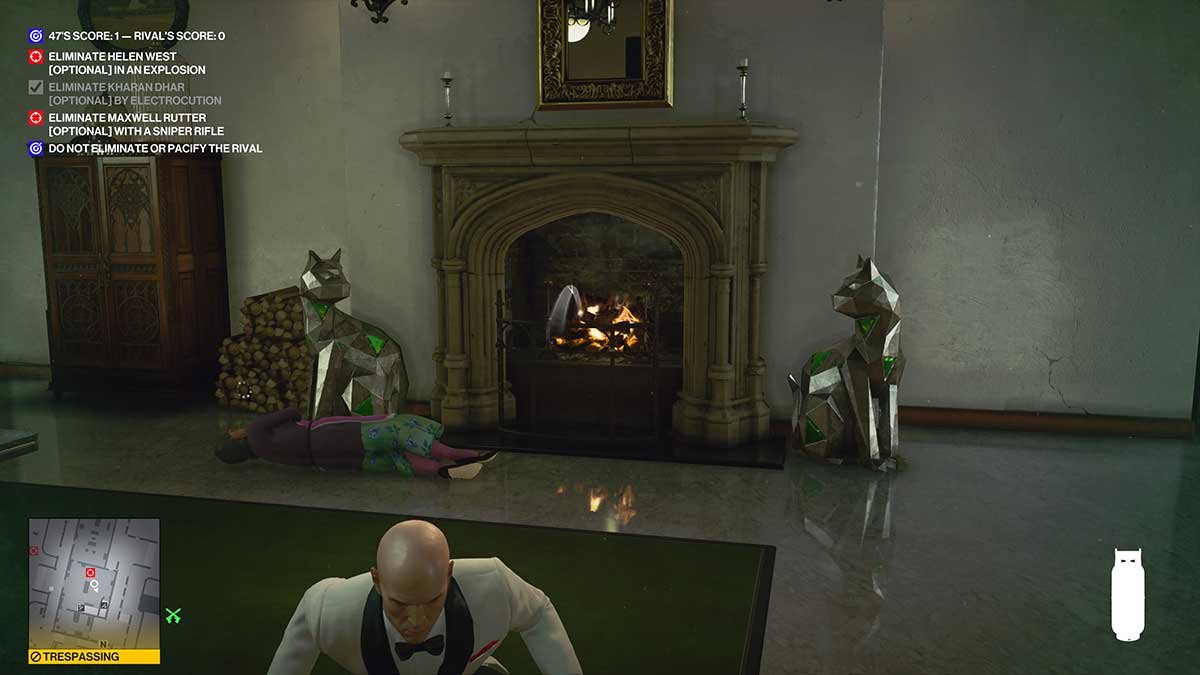 The Envy Contention is the Escalation added to Hitman 3 with the Season of Envy. It’s an interesting mission that pits you against a rival assassin who is also out to kill the targets assigned to you. This guide explains how to complete all three levels of the Escalation with a rank of Silent Assassin, Suit Only.

The gimmick with this Escalation is simple. There’s a rival assassin in each level who is also out to kill your target. You must kill them first and then exit. However, you can complete additional challenges if you kill the target with optional methods that Envy requests during the mission and if you complete them without agent 47 changing his suit. The loadouts are locked for this Escalation, so instead, you’re getting straight into the mission itself.

You only have one target to kill in this first level, but you have the rival assassin to work against and must kill the target with an accident. From your starting location, run forward and grab the invitation to the party at Mendoza. It’s on the ledge next to the NPC near the circle in the middle of the parking lot talking on the phone. You can’t get into the party without it, so now you can run straight for the main entrance.

Below is a map reference for this invitation.

Show your invitation and go down the stairs. Head into the main reception and pick up the bottle of wine on the reception desk.

Below is a map reference for this wine bottle.

You now need to run to the right of the main hall and into the wine bar. This is the large bar that’s cordoned off by a huge glass door. Head in and then go straight out the door to your left. This will lead you to a balcony. Your target is going to be hanging out in this area, probably leaning over the railing. If you push him over the railing as soon as you arrive, you’ll likely be spotted by other NPCs in the area.

Instead, you need to wait for the target to move past the chair and trash can to the left. Then, get up and bump into him. An NPC in the area will walk to the wine bar wall and lean against it while he uses his phone. If you try to kill the target while he’s doing this, you’ll be spotted. Keep pushing the target until the NPC on his phone walks away to the railings where the target originally was. Once the NPC has walked far enough away, hit the target with the wine bottle to knock him out and dump his body over the railing. This will count as a falling accident kill.

There’s only one exit in the mission, so run there, sit in the chair, and enjoy the glory. You’ll unlock The Odium Suit, the Jaeger 7 Green Eye, and The Cat’s Claw Knife for completing this first level.

This second level of the Escalation has three targets, all with their own optional objectives. One must be killed with poison, the second a knife, and the third with the grape crusher. Again, you’re going to have a rival assassin working against you, and you can’t pacify or kill them. From your starting location, get up and take The Cat’s Claw Knife that’s in the statue next to you.

As was the case in the first level, you need to pick up the invitation and head to the party. This time though, you’re going down to the production level. At the reception desk, grab the two wine bottles and the coin that are sitting there. Turn right and make your way around the room. Circle back to the left and then take the stairs down to the metal walkway, but be careful of the workers standing at the bottom. Turn left at the bottom of the stairs, run to the next staircase, go down the first flight, and then vault over the railing with the black and yellow tape to get down to the production floor.

As soon as you land, take out a wine bottle and throw it at the worker just walking in from the left. Then, pull out the knife and throw it at your target, who is in the grape crusher ahead of you. Now turn around and move to the back of the room. A worker is leaning against a pipe here. Lean against the pipe and subdue him. Now you can drag the body of the other worker you knocked out into the grape crusher, but don’t turn it on. It’s worth hiding the body of your target a bit more here as well, and you’ll need to go up to them to pick up the knife anyway.

With the bodies hidden, sneak into the room to the left of the grape crusher. There’s a large conveyor system in this room with a few NPCs milling about. Stay crouched to ensure you’re not seen. Head right towards the stairs but vault over the pipe next to them instead of using them. Then, use the second wine bottle to subdue the worker before hiding his body in the nearby container.

To the right of the container is a wrench on a toolbox that you need to pick up. Now go over to the railing for the walkway above and behind you and vault up to it. Use the wrench to knock out the worker. You need to wait for the second target to come up to the grape crusher from the opposite side so that you can push her in. It’s easier to vault over the edge of the walkway and wait for her to climb the stairs so that you can ensure you’re behind her. Push her in and then retrace your steps to the pipe where you subdued a worker earlier. Head to the back of the room and use the ladder to climb up to the top walkway and get back into the party.

Next, we need poison, so go outside and make your way up to the top floor. There’s a plant next to the bar which has lethal poison on it, so make your way there. Below is a map reference for this plant.

You need to poison the food to the bar’s right, but don’t do it too early. A male NPC will come over and eat some food and then fiddle with his phone for a while. Wait for him to move away as your final target approaches, then you can poison the food. At this point, you can run to the exit to save some time, but you can also hang around if you want to watch her die.

This final level gives you three new targets to kill, one with an explosion, another with electrocution, and the third target with a sniper rifle. Your starting location will have a sniper rifle and a briefcase next to it. Pick up the sniper rifle and conceal it in the briefcase. This way, you can carry it around the level without anyone noticing. Then, as with the previous levels, pick up the invitation to get to the party.

Head left around the room, go outside, and then turn left again. You need to go through the shortcut door to the left of this area in the wall. If you haven’t unlocked it, go and do so before trying to follow this route. You could try to go around the level to get here, but you’d have to change your suit. Follow the route to the stairs and wait for the guard to stop and turn to look out to sea. When he does, you can sneak past him. You need to go into the cave behind him, which is the shrine starting location. Pick up the propane tank behind the shrine and continue up the stairs.

Turn right at the top of the staircase to work your way around the walkway. There are guards stationed around the area who may spot you when they turn their heads. Pay attention to who is looking at you while you move. Make your way up to the villa and hide in the lavender. Make your way around to the edge of the low wall before the main garden, then vault into the lavender in there. This is when you can take out your sniper rifle. You need to shoot the light to your right to set up an electrocution kill for later on.

Conceal your sniper rifle again, and make sure you pick up your propane tank. Wait for the target to get closer than the guard on your right, then turn on the faucet. This will trigger the target to come and investigate, but they’ll be electrocuted before they can.

Vault up the walls behind you until you’re outside the villa. Your next target is inside, warming herself by the fire. Vault in through the window and knock her out. Then, throw the propane tank at the fire to cause an explosion that will kill her. Both of these kills count as accidents, so there’s no need to worry about the bodies being found. Next, go to the front door to the villa and wait for the guard to come inside. He just heard an explosion, so he’ll come to investigate, and you don’t want to get spotted.

This next part is incredibly risky, but it’s the best way to leave the trespassing zone. Sneak through the door and go right around the central structure in the car park. The waiters may notice you, so try to stay clear of them and remain crouched. You can go behind the cars to get a break if you need one. Then, you need to run past the guards at the top of the stairs. They’ll all stop spotting you once you’re past the guards because you’ll be out of the trespassing zone. This is the one area where you may need to reset if you’re spotted too early.

Run into the doors behind the bar, where you made poison in the second level, and grab the emetic rat poison on the left. Then you can leave the area and head off to poison the final target. There’s a glass of wine a the party that the target will drink from. You need to wait for the woman in orange to be leaning against the railing before you poison the wine. If she isn’t, wait for the target’s next cycle and poison it then.

Below is a map reference for this glass of wine. It’s outside of the party on the lower balcony near the stairs that lead down to the winery production facility.

This will cause the target to go to a better position where we can kill them from. Run upstairs to the restaurant and make your way to the outer curve in the flooring. There’s a huge planter here filled with lavender. Below is a map reference for this sniper spot.

The target will be walking over to a huge planter below you to throw up. Wait until they’re being sick, then shoot them in the head or upper back to cause them to flip into the planter, and their body will be hidden automatically. Now, you’ll be given an opportunity to kill your rival. Turn to look at the huge metal silos in the distance. The rival is standing there next to a sniper rifle, where he was going to take out the final target. Shoot him in the head to kill him.

Now you can head to the exit and complete the final level of this Escalation. This should also unlock all challenges associated with the Escalation, meaning you don’t have to do anything extra to unlock everything.