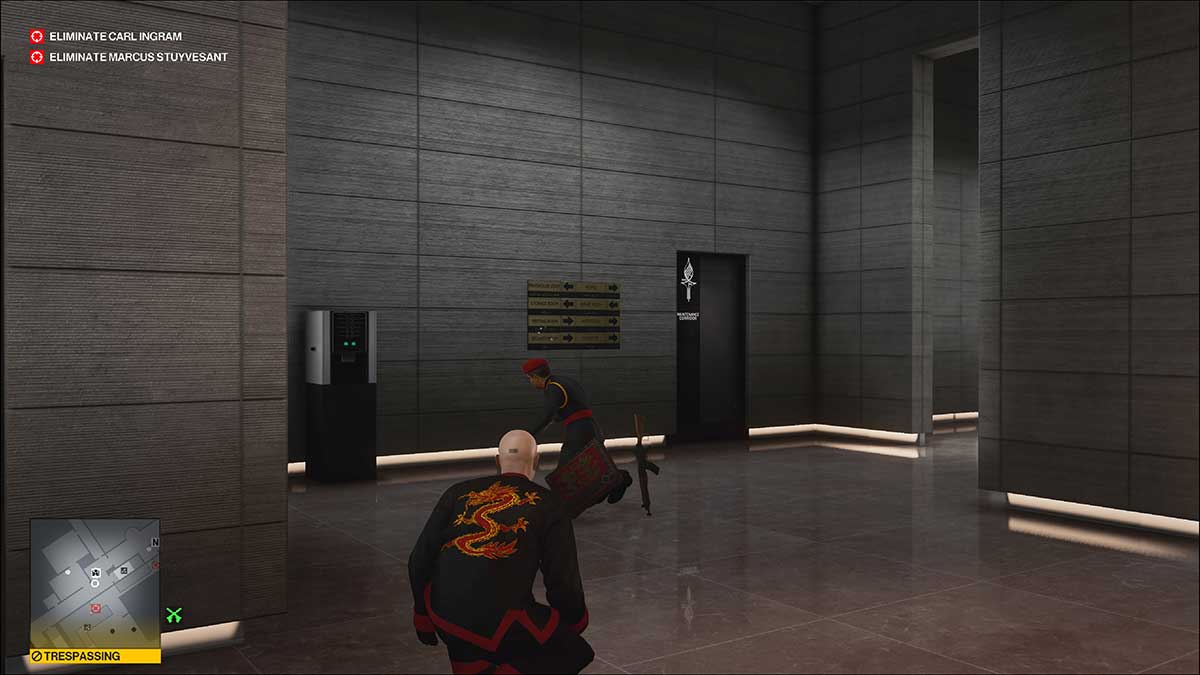 Before you go into this challenge, we’d recommend that you complete the story mission in Dubai at least once. If you already roughly know where the map’s key locations are, it’ll make this so much easier.

The loadout for a Sniper Assassin run is quite specific. The starting location needs to be somewhere you can bring a briefcase, which is why we’re going with the Atrium. You’ll need the coins and any silenced pistol as well. Your outfit doesn’t matter, so pick something fabulous since you won’t be changing throughout this whole run.

Finally, you need a briefcase and a sniper rifle. Any will do. You can get the gorgeous combination we have in the image above by completing The Lee Hong Derivation Escalation.

For the first section of this run, we’ll be clearing out a few NPCs who might get in our way. It’s a lot of setup, but the payoff is worth it.

From the Atrium, run up the stairs and follow them left. You need to get to the Black Gold Bar. To the left of the bar are some blue curtains. There’s another staircase that you need to climb behind them.

At the top of these stairs, turn right. You’ll only be trespassing once you’re through the double doors at the end here. Take a breath, use instinct to check that the guard on the other side won’t see you, then rush through and out the double doors in front of you.

Keep running and go through these doors and up the stairs behind them. It might feel reckless, but if you’ve been running since the start of the mission, you shouldn’t be seen.

At the top of the stairs, you can slow down. This is a technician’s area with loads of equipment and two NPCs. You need to wait until they’re both working on equipment before moving left around the low boxes to get past them.

As you move left, you’ll notice a crowbar on one of the boxes. Take it. We’re going to use this later.

Turn around here, and you’ll see a blue tarp over the railing. You need to vault over this and then move to the left so that you’re under the balcony, looking into the corridor above.

You need to flip a coin and distract the guard up there. His patrol takes him from in front of the stairs to the water cooler and back. When he’s at the stairs, flip the coin to draw him away.

Use your briefcase to take the guard down. You then need to drag his body into the maintenance room just left of this position. It’s the doorway you can see in the image above. There will be a janitor in there, but he won’t spot you as you hide the body in the locker.

For good measure, take out the janitor with the hammer in this room. Then hide his body in the same locker. We’ll be doing something that might alert him later. Better to be safe than sorry.

Now it’s time to head back to the door to the right of the water cooler that the guard was so interested in. Down this corridor, there are two janitors. One is standing by the railing, having a phone call. The second one will patrol into view here but then move back around the corner.

Subdue the first janitor with whatever is handy. Then use your briefcase to take down the second one. There’s a locker around the corner here that you can hide both bodies in.

Head back to where the first janitor was by the railing. She should have dropped a keycard. This is to the server room on the same corridor.

Pick it up and walk back towards the door where the guard was. The server room door will be on your right.

Use the card to get into the server room. Once inside, a cylinder will pop up from the floor. You need to swipe the card on this device now.

This is part of one of Dubai’s story missions. One of the four server towers around you will now display yellow text instead of green text. Find the yellow text server tower and interact with it. Agent 47 will pull out a rack, so now you can access the terminal in the room.

Once you’re on the terminal, you need to go to option “03” and “01.” Do it in this order, and you’ll disable all the cameras in the building and rearrange a meeting between your two targets.

Head through the double doors in the server room, and you’ll be in the maintenance room where you stored the guard earlier. Leave this room and enter the corridor where that guard was stationed before you knocked him out. Turn right and run down the hall. Keep an eye on the doors on your left, and stop at the penthouse suite door.

Use the crowbar to open the door and go all the way up the stairs. Head through the door ahead of you and pause as you get into the penthouse proper. Use instinct to see where your target is. If you’re lucky, there won’t be anyone around to see you.

Just around the corner from the position in the image above is a chest. Quickly move around this corner and hop in. This will hide Agent 47 and his suspicious briefcase.

Below is a map reference for the chest.

With all the setup out of the way, you just need to wait now. Both targets will come into this room and sit down on the couches. The guards will also leave the area, allowing you to exit the chest and hide behind the bar. One of the targets might start to notice you and stand up, but if you’re quick, then they’ll sit down just as quickly.

Once the targets begin to talk, a prompt will appear in the box with the hazard sign on it behind this bar. This will secure the room, meaning no guards will get in. Since it’s part of a distraction, both targets will be looking away from your position as well.

Take this opportunity to get your sniper rifle out of your briefcase.

When both targets stand up, move to the right of the bar and aim down the sights of your weapon. You can shoot and kill both targets within a second of each other. If you have a sniper rifle with piercing bullets, you might even take both down at once.

Put your sniper rifle back in your briefcase and hide the bodies in the chest. While this isn’t necessary, you could still unlock the Silent Assassin challenge if you hide the bodies. It’ll also make staying hidden a lot easier if no one is looking for a killer.

When you’re done, deactivate the lockdown by using the same button that activated. You need to return down the same staircase you used to get up here. Unfortunately, there’s a guard in the way. Use the briefcase to take him down.

You need to hide this body in the room through the door on the right just ahead of the guard in the image above. There’s another NPC in there, but they won’t see you drag him through. Hide the guard in the freezer. You could also take down this second NPC and hide them in there if you fancy it.

Bring your briefcase with you and leave it in this room. If you don’t, guards will pick it up and start moving around out of their regular patrols.

Now you could just go back the way you came, but that’s not a challenge. Our route adds a little more risk to the situation if you feel up to it.

Once you’ve done all that, head down the stairs. Use instinct to avoid being caught out by anyone coming up them. At the bottom, turn left and head for the window. Use your camera to unlock it.

There’s only one route, so you should follow it just fine. Eventually, you’ll come to another scaffold outside of a window. Use the camera to unlock it, but don’t vault inside just yet.

Wait for the NPCs to finish their smoke and move on. Then vault the window and head for the doorway in the top right corner of the image above. Now you need to head up the stairs to the laundry room. Stop outside of it though.

Use instinct to make sure that the NPC inside the laundry room won’t see you. When you’re sure, burst in and subdue them. Hide their body in the laundry bin.

The black and gold door in this area leads to the bathroom of the Black Gold Bar. You need to rush through as soon as you open it to avoid being compromised. Once you’re through, you can make your way to any exit you choose. We’d recommend the Atrium since it’s safe.