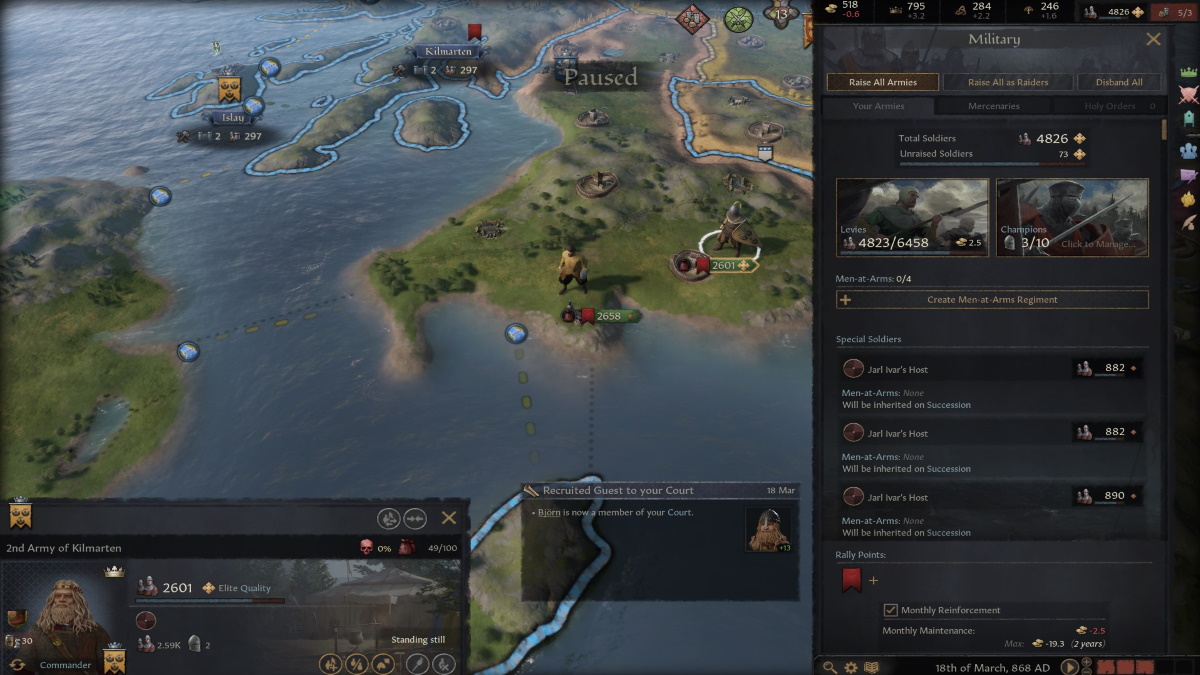 Not every territory you recovery in Crusader Kings 3 can be down by asking nicely. More commonly, you and your allies will have to go to war against your neighboring countries. The conflict could happen because of disagreements, or you merely want more land for your dynasty. When you need to call your armies, it’s best to know how to manage them.

How to raise and manage your armies

When combat starts, you need to raise your levies from their provinces to become an army. You can do it from the military screen. Click on the military icon on the top right, and on the military screen, the option to raise all your armies should be at the top. Unless you have multiple rally points all over your realm, your army spawns at a single location. Most of your forces are levies, farmers with primitive weapons, so they are not a refined army.

However, men-at-arms and knights, or champions, are also available in your army and are the best fighters among your horde. They’re capable of turning the tide and doing severe damage to any army you come across. Your ruler can have a select number of knights serving them, and they’re made up of characters from your court. Men-at-arms take prestige to construct and maintain.

Traditionally, your ruler can command the army, but you can choose another military leader to oversee it. Do this, click on the army once it has fully formed, and you should see your ruler’s icon on the bottom left. Click on them, and choose another character to command them. The commander of the army has the potential to be captured or die during battles. The leader’s commanding ability is a combination of their martial skills, and additional bonuses from various passives you can earn during your campaign.

How to fight armies

When two opposing armies meet up on a single province location, they battle against one another. The two character icons on the map meet up and start fighting each other, serving as the stand-in for the two more massive armies battling.

An army’s size and quality determine the winner. Smaller armies of higher quality have a good chance of beating a larger, lower-quality army. For example, an army of 3,000 levies might not win against a higher quality army, even though they only have 1,500 to 2,000 soldiers. The higher quality armies typically have knights and various men-at-arms combatants.

When armies encounter each other, the battle numbers displayed at the bottom of the screen show how they are doing against each other. There’s also a number in the middle that shows if your army has the advantage or not. If the number is positive and green, your army has the advantage is winning. When it is red and negative, your soldiers are losing ground and steadily losing. You gain a benefit based on the terrain, your commander’s martial skill, your commander’s traits and bonuses, and the type of soldiers you are commanding.

Alongside each commander is their respective combat rolls, showing how well they did during that round. The commanders are constantly rolling against each other, using their numerous advantages to claim victory.

Once you win the battle, the winner remains in the territory, and the other one moves away. Both armies will have less than they started with, but if you wait a few days, the army returns to full strength unless your army is losing supplies.