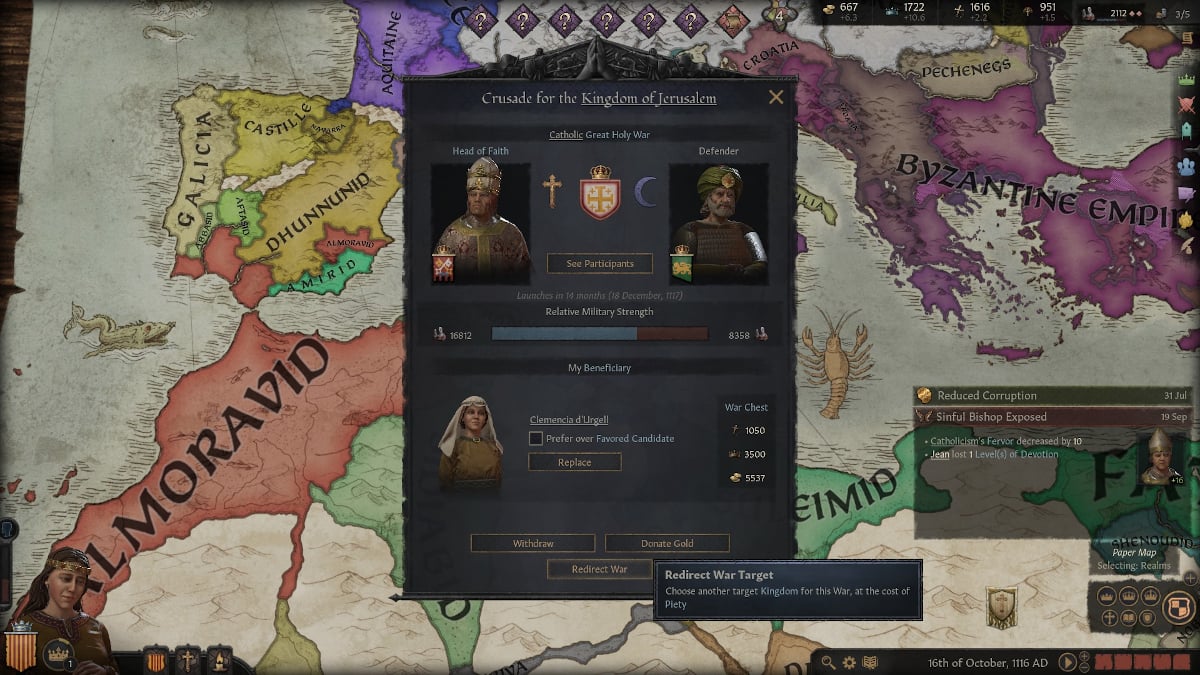 With the new features in Crusader Kings 3, the Great Holy War feature, or Crusades for that matter, adapt to the new game. While most of the old conditions of Crusades exist, it is more the direction of the Crusades that work differently.

A Crusade will only fire around the late 10th Century, just as it happened historically. However, when a Crusade fires, characters must pledge to join the Crusade. When they pledge, they will have to march their armies to the Crusade destination as part of the pledge. Otherwise, players are going to take an opinion hit.

Also, the Crusade window is relatively similar to the updated Crusader Kings II. Players will have the choice to donate different amounts of their treasury to the Crusade in exchange for direct piety and other goodies. Due to the way Crusader Kings 3 work, getting involved with Crusades and heavily contributing is a major source of character progression.

Players will also need to select a beneficiary to receive titles if the Crusade is a success. Available characters tend to be a member of your dynasty. Succeeding in a crusade grants them land, wealth, and more based on your contribution. Being first in successful crusade grants the primary title, while other ranks get the next best thing depending on what’s available. Players tend to get lots of faith, money, and fame for their position as well.

Other pagan religions are perhaps where the feature changes the most. Pagans can also gain the opportunity to call for Great Holy Wars. To do this, players must reform that religion and gain a head of the faith. When a pagan religion becomes organized or reformed, the faith may choose tenets that allow for Holy Wars. These tenets are either Warmonger, Armed Pilgrimages, and Struggle and Submission. If any of those become available, then players can go to war with the Great Holy War casus belli under pagan religions.

On another note, it is worth mentioning that reforming a pagan faith allows the player to choose from Directed or Undirected Crusades. Having a Temporal head of the faith means that character can choose the Great Holy War’s target. On the other hand, a spiritual head can only decide to start one, and the target will be random. This is similar to Catholicism’s mechanic.

The Muslim call to arms normally occurs shortly after the first Crusade against an Islamic target succeeds, typically the Crusade for Jerusalem. Once when that happens, Islamic faiths can get pop-ups to reclaim lost territory from Arabia, Egypt, and North Africa.