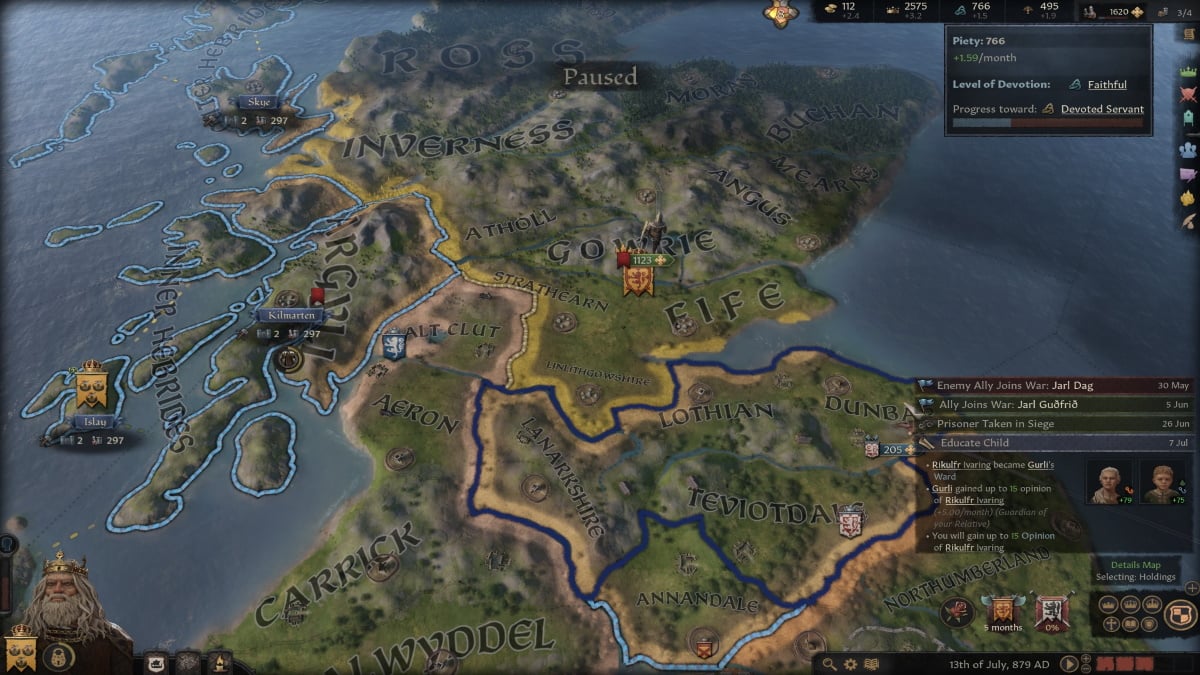 Piety is one of the four primary forms of currency in Crusader Kings 3. It’s a measure of your character’s devotion to their faith. It determines how many other rulers and characters in the game view you. For example, suppose your character is of Ásatrú. Chances are a good majority of the Catholic religion characters likely dislike your character more because they view those of that faith negatively. It can be a vicious cycle when attempting to engage other leaders politically. Still, if you improve your relations enough, sometimes it is overlooked. It’s a useful tool to expand your empire and promote your character’s faith to others.

You first need to learn about the tenets and doctrines within your faith. To do this, you can visit the faith page on the lower-left portion of your UI. Next to the culture icon next to your character portrait, it should be right next to your character portrait, represented by the candle. Click on it, and it should say what faith you are at the top. There’s a lot of information here, breaking down what you want to follow and what you can do to support your religion. Every character has a monthly piety gain, much like currency and prestige. By following your tenants and doctrines, you can gain bursts of piety.

An excellent way to improve your character’s piety is to do any of the tenets listed on the faith page. These are distinctly listed out on the faith page for you to impact your character positively. Some of these are also available on the decisions page. A good one is for your character to undergo a pilgrimage. It has your leader go away for a few months to visit one of the sacred locations of your faith, encouraging them to become closer with their god(s). You cannot do it when your leader is at war or leading an army.

Similar to prestige, your best bet is for random events to occur in the game. Read through the options and individual choices to choose those that have your character gaining piety over prestige or currency. Be on the lookout for them in your playthrough, and you may find ways to rise through the levels of devotion steadily. Those who prove themselves devoted enough to their faith can create a new faith that’s a different branch than that one, with various doctrines and tenets, sometimes making it easier for succession to happen.