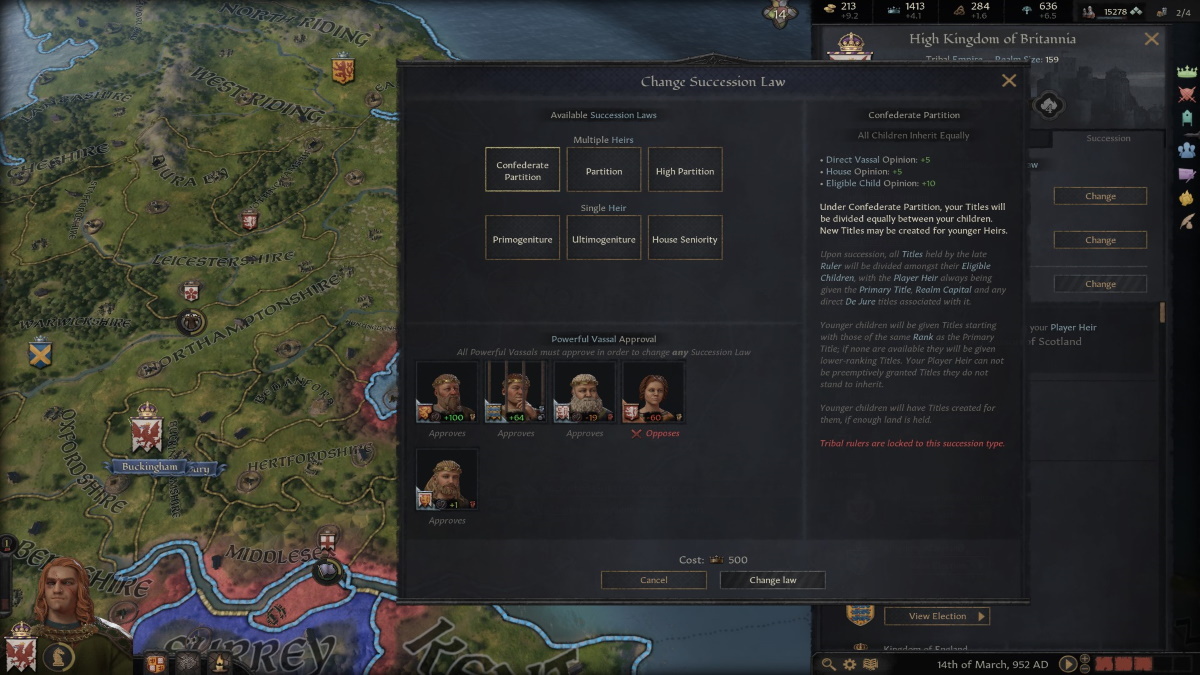 Succession is a big deal because it determines how your ruler passes down his claims and pieces of land in Crusader Kings 3. You want your heir to keep as much of it as possible, ensuring your line endures to expand it. You don’t want your heir to gain a large chunk of it with their brothers and sisters receiving smaller pieces. It breaks up a lot of your ruler’s work, likely preventing you from expanding. Altering the succession laws are tricky, but it’s possible.

You have the opportunity to break the tribal succession laws when you discover new ones through your culture. To open up the culture tree to examine this, click the candle icon on your character’s bottom left. Almost every culture starting in 867 is in the tribal cultural era. They’re forced to remain in this tree until they learn at least half of the cultural ideas, and it becomes at least 900 AD. Once you break into the next cultural tree, the Early Medieval era, if you are the culture’s leader, you can choose how you want to alter the succession laws. You can find those options under the Civic tree, notably the Hereditary Rule and Royal Prerogative.

However, those starting in the 1066 era with any of those leaders have a better chance to alter the current succession. Many of the leaders should already be in the Early Medieval era with their culture.

Now, once you have access to those laws, you have to change them in your realm screen. You can find these options under the Crown icon on the right side of your UI. Click on it, and then go to the Succession tab. On this screen, you can see your heir when you die. You can also see what titles they will lose when you die, which is critical to note if you want to keep as many of these as possible before passing on the torch.

On the Succession screen, you can open up the option to choose how you would like to change your succession laws. Unfortunately, there are some requirements to do this, even if your culture accepts and understands the law. You may need to increase your crown’s authority, improve a vassal’s opinion, so they approve of you and the decision, and every time you change the succession laws, it costs you 500 prestige.

Once you know what you have to do, it’s only a matter of time to make those changes. The realm tab also details your crown’s authority, breaking down what those different authority levels mean. The higher level of authority you go, the more say the absolute say the crown has, giving the ruler more power. Still, your vassals approve of you less because of these rules. It’s essential to keep your vassals in mind when altering these laws and make sure you pick an ideal heir. It doesn’t always have to be your offspring.