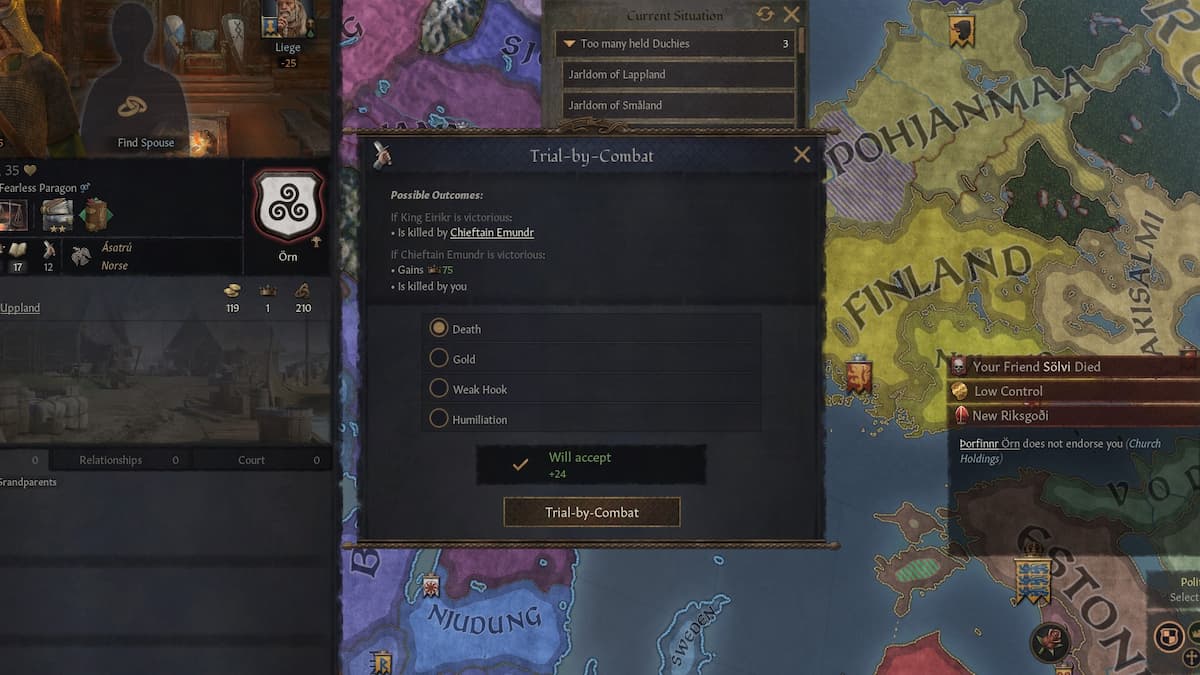 When disputes occur in Crusader Kings III, you normally will find yourself trying to find a way to approach the situation diplomatically, or you’ll be mustering up your armies to take down your rival. Sometimes it’s easier to attack your enemies with a reinforced army to risk putting your character’s honor on the line through political backstabbing. But there is another alternative that you can try instead. If permitted, your ruler has the opportunity to challenge a rival to a duel. These duels can net you additional gold, a weak hook to use against your rival after the battle, to bring about humiliation to your rival, or you can choose to battle them to the death.

Nearly any character in Crusader Kings III can issue a duel to another character. You might receive the chance to do this through a prompt, or when you interact with a character, there will be an option to request a duel from another person. You might have to meet requirements before the duel, such as having a reason to do it dictate by your culture’s laws, or because your ruler has a reason to jail them.

You’ll have four options to pick from that the winner receives as the victor of the duel.

Once you’ve chosen what the winner receives following the outcome of the duel, there will be several prompts you have to choose from to happen during the fight.

The choices will vary. You can pick to charge at your opponent, attempting to catch them off guard. You can choose to tire them out using various defensive techniques, hoping to catch them off guard and open them up during the battle. The choices vary, and each comes with an increase or decrease to your character’s current stress. You’ll have to balance how you want to assault the opponent, and picking the correct attacks varies on your character’s combat prowess and your opponent’s stats.

There will only be a handful of prompts, typically two to four. Following the outcome, your character will walk away as the victory or the defeated. They gain everything that both parties agreed to at the start of the duel, and it might mean that your character is dead and you have to continue playing with your heir.