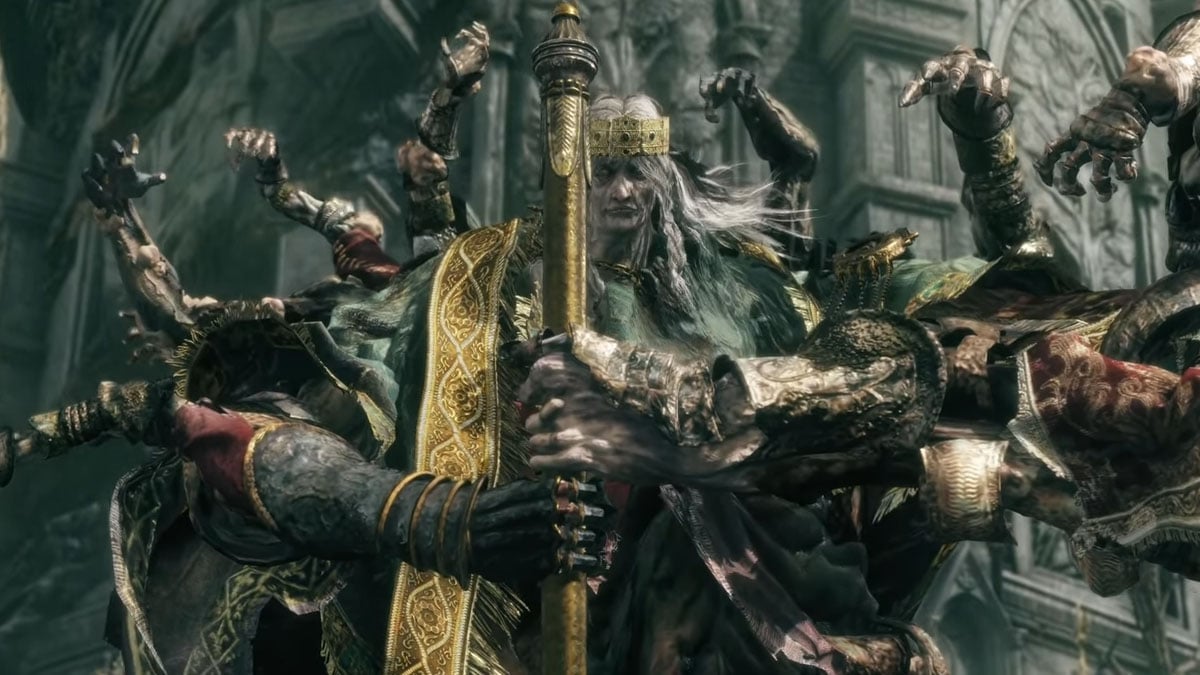 While Elden Ring has no small number of enemies ready to kill the Tarnished, Godrick the Grafted poses a unique barrier to progress as the first of the demigod bosses players will face. Defeating Godrick the Grafted isn’t impossible, but like much of Elden Ring, he requires patience, timing, and perhaps a bit of luck.

Players can opt to solo Godrick the Grafted, but we’re of the mind that players should constantly hedge their bets with proper preparation. To that end, you’ll need to go meet an NPC named Nepheli Loux south of the Secluded Cell Site of Grace, down the path past a particularly savage monster and two of its friends. Exhaust all dialogue with her: she’ll mention Godrick as well, with a bit of background flavor.

Next, get rid of runes by either shopping or leveling. As most boss fights go, Godrick the Grafted will slap adventurers a few times, and losing all of your runes can be quite a blow to morale on top of being killed a few times.

When you’ve made your peace, step towards the fog gate and note the golden runes on the right side just prior: this allows you to summon Loux. She doesn’t offer great DPS, but she can help divide Godrick’s attention, and her heavy blows can help stagger Rodrick for high damage opportunities. Once Loux is successfully summoned and standing, head through the fog gate towards Rodrick.

Rodrick the Grafted packs a mean punch, and can combo players if he gets a good hit off. Melee players will want to stand about five meters out and watch for attack patterns. While Godrick is attacking Loux, run up and hit with heavy blows a couple of times, looking to stagger. You’ll know Godrick is staggered as he lets out a bellow and falls to his knees: get a few big hits off here, either with backstabbing or combos, whichever deals more damage for your character.

Magic players should use any summons they want after entering the fog gate, and keep a healthy distance while flinging spells. Godrick sends two wind attacks that pack a nasty punch: watch for them after his centered wind-AoE, as magic users will be most at risk of succumbing to them.

Note that Godrick has a strange delay on attacks: he will appear to start swinging, then briefly pause it, causing most players to whiff their first roll and subsequently get nailed by the rest of the combo. Practice makes perfect, here, but being cognizant of the delayed attacks is typically enough to ensure you can dodge. If he grabs the axe with both hands, he’s about to summon wind as an AoE centered on himself finished with either a leaping slam or wind bursts. Step backwards, tend to health, and keep an eye on your stamina before rushing back in.

Once Rodrick is roughly 60% health, he’ll start screaming: get behind him at this point and drop as much damage on him as you can. He’ll lurch forwards with his axe, causing damage to anyone in front of him, and then a cutscene will play.

This isn’t even my final form

As with many bosses in Elden Ring, Godrick the Grafted has two stages. His second stage has him adding fire damage to many attacks, with a huge cone-shaped AoE being added to attacks that need to be dodged. After Rodrick is done screaming, the cutscene will end and Rodrick will be shooting a flame into the air. Players should immediately dash towards him, on the right side to get behind the flame AoE. Note that hesitating, or getting stuck on scenery, will cause you to take heavy damage if you can’t get behind the arm.

This will put players behind Rodrick while he continues his attack, leaving him exposed for massive damage. If you can get enough heavy hits, you can stagger him at this point which almost trivializes the second part of the fight. When in doubt, however, always play the fight safe. You can re-approach to do more damage later as long as you haven’t been turned into charcoal.

Watch the animations: they are mostly the same with fire added, and playing at a distance will allow players to rush in at the close of his combo to offer some return damage. Keep a cool head, play off Loux’ aggression, and you’ll be a step closer to becoming an Elden Lord in no time.