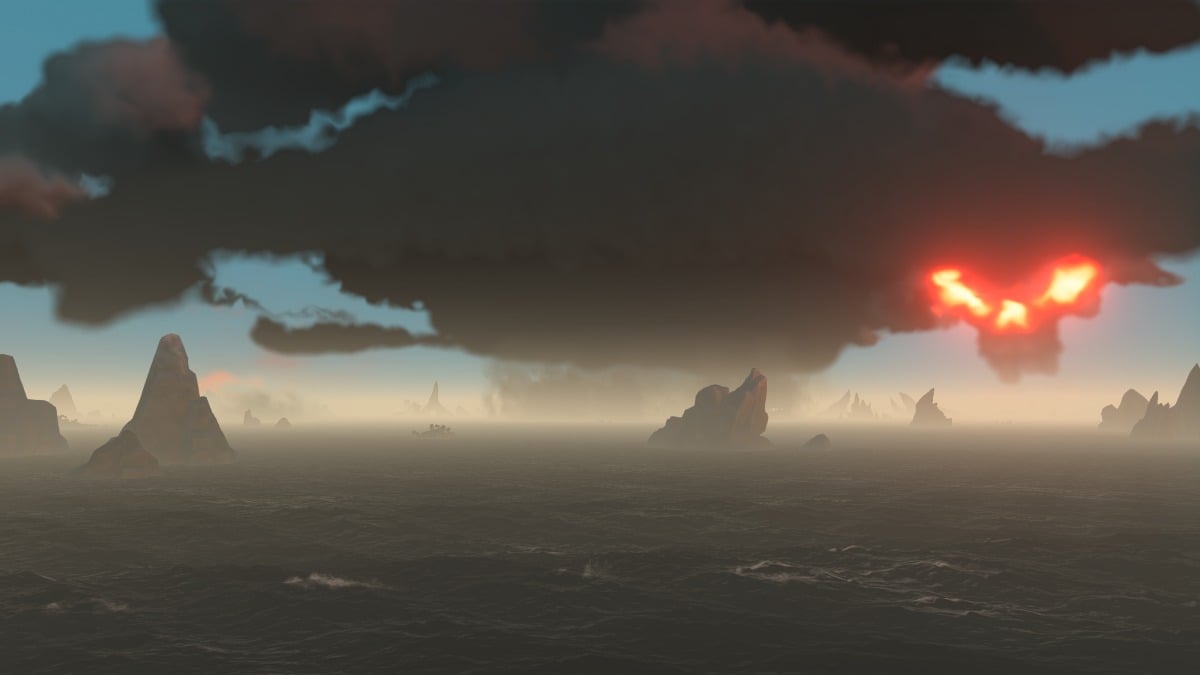 Stormfish can only be found while fishing in a Storm, and three Stormfish can only be found in certain regions of the map: The Ancient Isles, The Shores of Plenty, and The Wilds, respectively. You can either wait in one of these Regions for a Storm to come by and move to another after catching the fish there or follow the Storm around the map, which we recommend if you still need a lot of Stormfish.

You can locate a Storm by looking for a giant mass of dark clouds on the horizon. It moves around the map and changes direction, but you’ll want to keep sailing toward it. Keep in mind that it stays out of The Devil’s Roar. You’ll need to be relatively deep into the storm for Stormfish to spawn. Just wait for the bell on your ship to start ringing, as that means you’re in deep enough.

Make sure you dig up some Leeches along the shoreline before casting off. You’ll need leeches for bait. The pool of fish you can catch should be limited to just Stormfish and Splashtails. If you sail into The Ancient Isles, however, you’ll also have to deal with Ancientscales.

We recommend you fish with a larger crew — not just to catch more fish and better your odds, but also because you’ll need the help patching the ship, steering, and bailing water while trying to fish. Stormfish sells for more than any other fish in the game, though, so the rewards can be well worth it.

The Shores Stormfish is The Shores of Plenty variant of Stormfish, so it can only be found in that Region. The Shores of Plenty makes up the top-left side of the map. Like the Ancient Stormfish, the Shores should be a fairly common sight if you’ve met the conditions for it to spawn, so don’t give up too soon. You can identify the Shores by their size, shape, and yellow underbelly. If you have trouble seeing in a Storm, adjust the brightness settings in-game or on your display. One regular raw Shores Stormfish sells for 450 Gold at Seaposts.

The Wild Stormfish is The Wilds variant of Stormfish, meaning it only spawns in that Region. The Wilds makes up the top-right side of the map, which you can’t miss. It’s an incredibly dreary place with ominous skies and murky waters. Fortunately, the vibrant, lime-green stripes of the large Wild Stormfish make it relatively easy to identify, even in The Wilds. It’s also pretty common when the conditions to spawn it are met, so you shouldn’t have trouble finding one quickly. One regular raw Wild Stormfish sells for 450 Gold at Seaposts.

Related: How to catch all Battlegills in Sea of Thieves

The Shadow Stormfish is a Rare variant of Stormfish. Of all the fish in Sea of Thieves, this is the one you want to catch the most, as it sells for more than any other fish. You can find it anywhere in a Storm outside of The Devil’s Roar, but you could also travel to The Glorious Sea Dog Tavern (coordinates K-11) or Uncharted Island (coordinates N-13) and wait for a Storm to roll by. These map tiles aren’t in any Region, so the pool of fish you could catch would be limited to just Splashtails, the Shadow, and the Twilight Stormfish. Given the randomness of Storms, though, it might be best just to track the Storm rather than waiting, but it’s up to you. Everything depends on luck.

The Twilight Stormfish is the Night variant of Stormfish, meaning it can only be caught in a Storm at night. It’s available in all Regions except The Devil’s Roar. When the conditions are met, it should be a fairly common find, but it may be difficult to tell when night arrives while in a Storm. Just stay on the edges of a Storm and enter it when the sun sets if you’re having trouble. The Twilight is easy enough to spot because its stripes and fins glow a pale, pinkish-orange in the water. One regular raw Twilight Stormfish sells for 450 Gold at Seaposts.

If you’re having too much trouble dealing with Storms and want to find some fish another way, always check Shipwreck Barrels, Barrels of Plenty, Skeleton Ship Food Barrels, Rowboat Chests, and Storage Crates for random fish spawns.