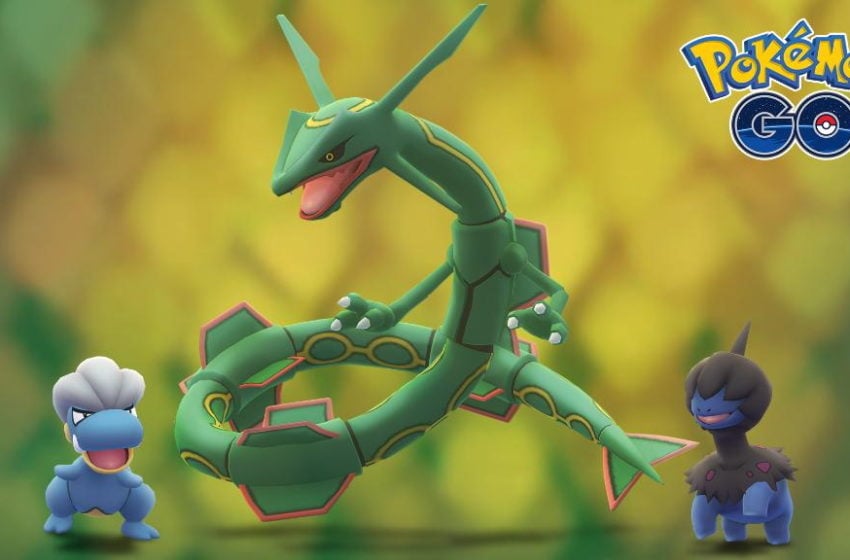 Rayquaza is an incredibly powerful Pokémon that you can rarely encounter in Pokémon Go. When you do, it’s normally because you can battle it in five-star raids, but you may have the exceptionally rare chance to catch it for a Pokémon Go promotion rewards event, such as when you have the opportunity to catch legendaries like Mewtwo or Groudon. When you square off against Rayquaza in a five-star raid, make sure to bring your best Pokémon, and a couple of other trainers to back you up.

Rayquaza is a Dragon and Flying-type Pokémon. It’s weak to Dragon, Fairy, Rock-types, and its doubly weak to Ice-type attacks. Of your choices, you want to focus on using Ice-type Pokémon and attacks against it to take it down.

There are several Pokémon to choose from to bring out while fighting Rayquaza, but your best choices include Galarian Darmanitan, Mamoswin, and Weavile.

Galarian Darmanitan is a newer Pokémon, and it’s the Ice-type version of the regular Darmanitan. It has a max CP of 3,105, an attack of 263, a defense of 114, and a stamina of 233. It has extremely weak defenses, meaning you want to primarily focus on this Pokémon to be your attack, and you maybe only want to use one or two of them in your roster to fight Rayquaza. The best moves on it include ice fang and avalanche.

The next choice is Mamoswine, an Ice and Ground-type Pokémon. Before Galarian Darmantain, it was an Ice-type powerhouse and was the strongest Ice-type attacker Pokémon, which means it still packs a punch against anything weak to it. It has a max CP of 3,328, an attack of 247, a defense of 146, and a stamina of 242. You want yours to know powder snow and avalanche.

The final best option includes Weavile, a Dark and Ice-type Pokémon. It has a max CP of 3,005, an attack of 243, a defense of 171, and a stamina of 172. It has several more weaknesses than the others on this list, but Weavile has plenty of attack power behind it to give Rayquaza plenty of trouble. The best moves to use on it include ice shard and avalanche.

All of the Pokémon have low defensive stats, which means you want to have a handful of other, more robust Pokémon backing them. You don’t only have to use these Pokémon, either. Other choices include Glaceon, Articuno, Mewtwo, Dialga, Cloyster, Regice, Kyurem, Garchomp, Lapras, and Rhyperior.

After defeating Rayquaza you and your friends have a limited number of chances to try and capture it using Premier balls. You can receive more Premier balls by contributing more to the battle, having the Rayquaza raid on a gym owned by your team, and by battling with trainers on your friend list.