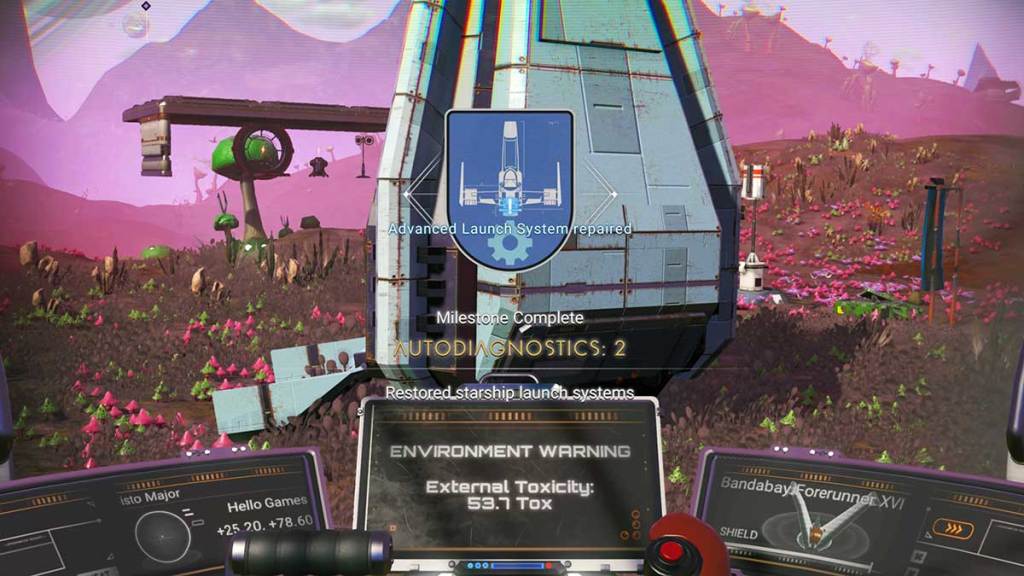 Autodiagnostics: 2 is the first Milestone in Phase two of No Man’s Sky Expedition Three: Cartographers. However, it’s far from easy to complete. In fact, we found ourselves stuck on this one for quite some time, which is why we’ve put together this guide for how to complete the Milestone and get your ship off the ground.

The first thing you need to do is ignore this Milestone. It’s impossible to complete Autodiagnostics: 2 without first completing the second Milestone in this Phase, Power Surplus. To complete this Milestone, you need to power your base up with 150 units of energy. We managed to do this by placing four Biofuel Generators and attaching them to Batteries. Then, we filled them each with about 300 to 400 Condensed Carbon. This completed the Milestone and allowed us to claim the plans for the Quantum Computer as a reward. Do this, and you’ll be one-third of the way through.

To complete Autodiagnostics: 2, you need to fix your ship’s Launch Thrusters. These need to be repaired by fitting a Quantum Computer and three Storm Crystals. The easiest part of this Milestone is picking up those Storm Crystals since they spawn on the planet all the time. They’ll appear during storms, which sweep over pretty frequently. Wait until a storm is raging, then use your visor to find a Storm Crystal nearby, run over to it, and pick it up. You can probably get all three in a single storm, so don’t be afraid to head out into the terrible weather. Once you’ve got these Storm Crystals, fit them to the ship’s Launch Thrusters.

To craft the Quantum Computer, you’ll need one Microprocessor, one Antimatter, and 25 Chromatic Metal. You can make Chromatic Metal by processing a metallic element like Copper, of which you can find deposits all over the planet. Use your visor to find one, mine it with your Terrain Manipulator, then convert it in a Portable Refiner into Chromatic Metal.

To make a Microprocessor, you need 40 Chromatic Metal and one Carbon Nanotube made from Carbon. Finally, you make Antimatter by combining 25 Chromatic Metal and 20 Condensed Carbon, which you make by putting Carbon through a Portable Refiner. Once you have these elements, you can craft and fit the Quantum Computer to your ship. This will complete the Milestone and allow you to claim the Galactic Trade Terminal Plans, a supreme movement system upgrade, and significant life support upgrade as a reward.