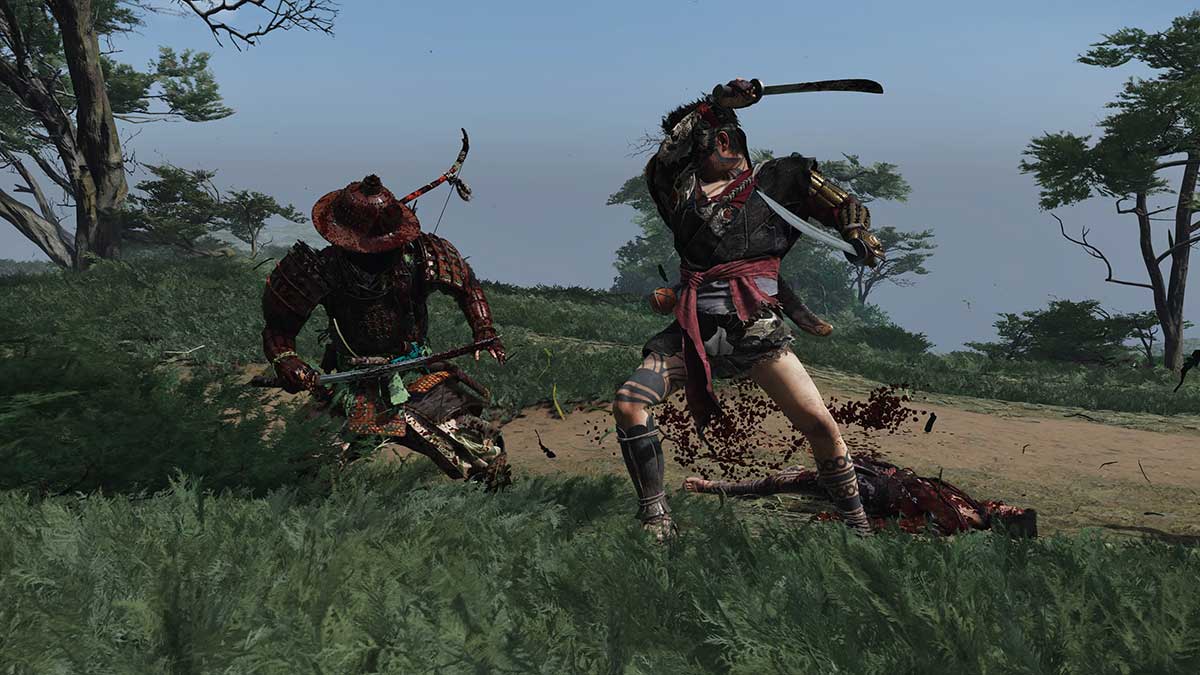 Black Hand Riku is a Mythic Tale in Ghost of Tsushima that you can unlock early on in your time exploring Iki Island. You’ll need to visit the game’s first major hub before you can hear the tale that triggers it, but once you have, you’re free to pursue this quest and unlock some incredibly powerful armor. This guide covers a few tips and tricks for completing the quest.

The first step in this quest is rescuing someone on Iki Island who has knowledge of Black Hand Riku. Follow the wind to the correct location, and you’ll stumble across that person who has now been captured by Mongols. Sneak around the group and get to the top of the nearby cliff. From here, you can pick the enemies off one by one without needing to face them all in close-quarters combat. There’s a Shaman in the group that you should try to take down first. Otherwise, they’ll make the rest of the fight extremely tough.

Once you’ve dispatched all the Mongols, rescue the sailor and talk to them. They’ll reveal how you can track down Black Hand Riku.

The person you rescue tells you to wait until nightfall and follow the lights in the water to a cave. Rest at the camp until nighttime, then head down to the shore. You’ll be able to see a faint blue light in the waves at the shore. Follow these all the way to the left, up the coastline, and you’ll eventually come to a cave.

Head inside the cave and continue to follow the light in the water. Eventually, you’ll come to a point when you can’t see a thing. Pick up the Fire Arrows and use them to light the braziers as you continue deeper into the cave. There’s a lot to take in and collect along the way, so explore every avenue of this cave. You probably won’t come back here.

Finally, you’ll come to a large pool of water. The monkeys have gathered around, and there’s a sinister voice beckoning you. Get ready for a fight.

Black Hand Riku is a fierce boss fight. You’ll need to watch every move he uses to spot the gaps in his defenses and get your hits in. He uses quite a few double and triple unblockable combos, so try to dodge out of the way of those attacks. You can easily parry all of his forecast attacks, but he’ll often follow them up with a flurry of other, smaller hits. Keep space between the two of you, and use the slice attack whenever you have the opportunity. After a long, arduous fight, you’ll finally defeat this opponent and claim his armor.

The Sarugami Armor set has several advantages for skilled players. It disables your regular parry, but your perfect parry becomes a chain of two or three attacks. You’ll also now damage enemies when you dodge. Any resolve gains you make are moderately increased in this armor, and the windows for perfect parries and perfect dodges are increased. Don’t worry. You’ll get the chance to test it out soon.

Step 4: fight for your life

A group of thieves will appear as you exit the cave, ready to kill you if you don’t surrender the armor. This is the perfect battle to test the armor out in, so make the most of your improved parry skills and wipe them all out. The leader is a much tougher foe, so you may want to use a Fire Arrow or Kunai on him to weaken him and avoid taking too much damage.