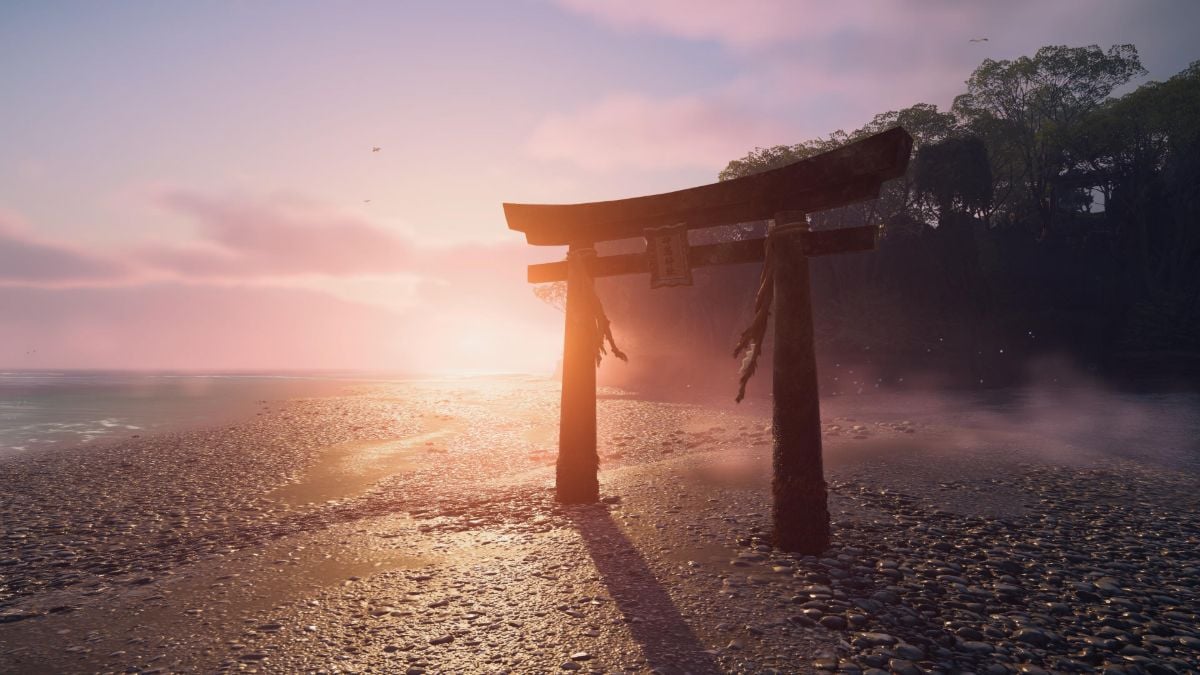 Shrines can give you valuable charms in Ghost of Tsushima, and on Iki Island, only one stands on this region of vagrants, thieves, and misfits. Getting to it can be a slight challenge, but with this guide, you’ll be there in no time.

Yes, there is only one shrine in this entire Iki Island expansion instead of the many in the main game. First, head south of the Weeping Mother’s Meadow, located to the southeast of Iki Island. We’ll be heading down to Nakajima Island, but you must scale down a steep cliff to get there.

You’ll find an Archery Challenge beneath violet-purple trees. Soldiers will be training with their bows and arrows there. Move past the archery challenge and up the hill until you’re at the cliff face. You’ll find a log sticking out with some red and white-colored rope. Jump on to it with your rope hook. Drop down the cliff safely to the shore using the handholds.

Once you’re down, you’ll see an island on your left that is absolutely covered by trees. Swim over. Once you’re there, follow the red temple gates that will lead you to the shrine. Squeeze through the rocks to get yourself inside and take a left. You’ll see a tree you’ll need to pull down with your rope hook. Hold the R2 button and then the L2 button to bring it down. Jump on the log and move through the crack behind you to proceed. Jump over the rocks and into a pit to the right to collect a Sakai banner.

Climb up the handhold and maneuver yourself right. You’re now on a wooden bridge with a monkey welcoming you at the end. Unfortunately, you can’t pet it. Jump to the right stone wall and leap to the branch. Cross the wooden bridges into some pond water. Turn right and squeeze under the rock.

You’ll now find Mashira’s Bite, a new color scheme for your weapon. But this isn’t over. Follow the path to the left and crawl under the rock. You’ll now see a cave and a passage up the rock.

Go to the right path and climb up the rock. Drop down once you see a frog statue. Turn around. You’ll see a white flower on the opposite side. Leap over to it. Use the hookshot once again to pull down the tree next to you.

Jump onto the log and then move forward. You’ll find the Nature’s Rhythm headband in a treasure box. Now, get back on the log, and on your left, you’ll see two branches sticking out. Jump onto them and follow the route up the cliff. Now is the moment of truth. You’ll need to make a death-defying jump to a branch with some rope on it down below.

Swing over to the small wooden platform. Continue the route and drop down to the platform with a white flag on it. Make sure you don’t fall off to the left, as that would bring you back to the beginning. Carry on forward, bring down yet another tree, and jump through the rocky tunnel.

Keep jumping and swinging down the route until you find a tightrope. Carefully walk over it, and don’t worry about the treasure box on the left. It only has supplies. Now, once you walk across a log, jump to the right to see some steps. Go up, crawl under the rock, and you’ll now find yourself at a high point. Notice the lanterns. Follow them on a path to the right. It looks unstable and looks like you shouldn’t be on the platforms, so watch your step. Go up the handheld marks on the wall. You’ll now see the shrine in sight, but don’t take a leap of faith across. Jin is impressive, but he’s not that superhuman.

Instead, go down the rocks on the left side and walk on a bamboo bridge. Don’t jump like mad; just drop down gently. Now you’re finally here. Congrats. You’ll gain the Charm of Reflexive Sight, which lets you focus on an enemy who has begun to detect you with the L2 button.

While there is only one shrine, you should keep track of the other locations you can get to as well. For example, animal sanctuaries like the monkey and deer sanctuaries can give you some neat bonuses to Jin’s attacks and stats.