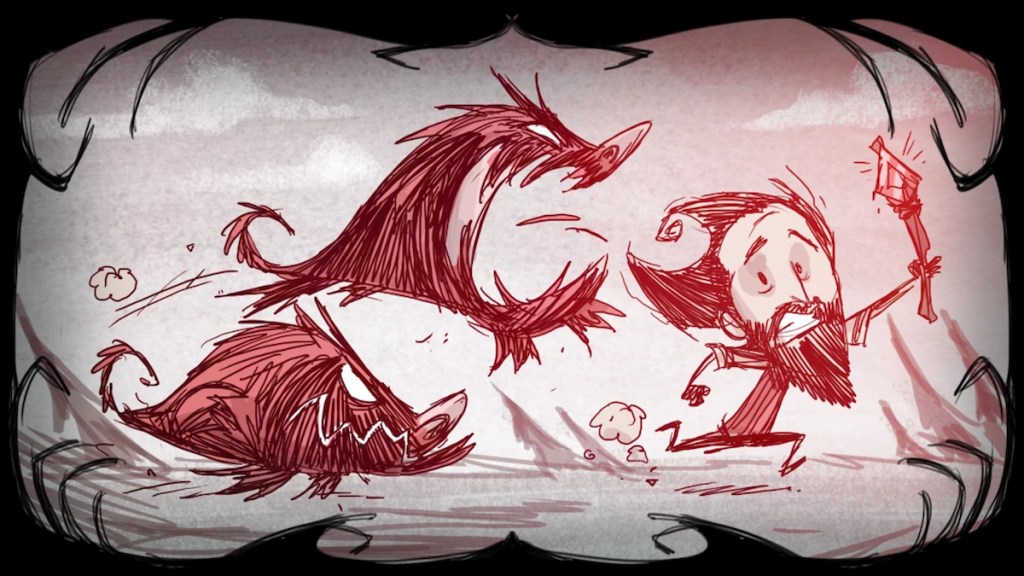 The thing about Don’t Starve is that it’s a game that always manages to throw you some curveballs. There are so many things that can uproot all your plans or even kill you. One of these unexpected things is the dreaded hounds, a mob that chases after you indefinitely unless they get distracted or you kill them. Luckily, you can predict their arrival and plan accordingly.

Hounds spawn every three to thirteen days and come in packs of three to four, with different variations of hound depending on the season. If you want to be well prepared, you’ll want to craft yourself a weapon and some armour. Log armour can be made with eight logs and two ropes so cut down some trees and gather six cut grass to craft into some rope. Such armour will take no time at all, and you most likely won’t have to take off any other clothing.

The next thing you’ll want is a football helmet, which is crafted using one Pig skin and one rope. Pig skin may not be the easiest thing to obtain, though, as you have to kill pig men, destroy their houses, or dismantle pig heads. They’re well worth the hassle, though, as they have a lot of damage reduction and are worn on your head. The rope is also easy to acquire, as stated above.

After that, you’ll want a weapon. Spears are the easiest to make as they only need one rope, one piece of flint and two sticks, all materials you can pick up everywhere. You don’t even need a science/alchemy machine to make them. If you want an even better option and you got pig skin by killing pigs, you might be able to craft a ham bat. Ham bats do a lot more damage and don’t spoil with use; they spoil over time which is usually ten days. To craft them, you’ll need two pieces of meat which you can get from pig men, beefalo, and catcoons. Also, grab pig skin and two twigs to have all the materials. Hounds can only survive a few hits when you use a ham bat.

There is a warning before hounds make their appearance, as your character will remark that they hear strange noises. These will be the sound of barking dogs, and they will soon descend onto you. Equip your armour, grab your weapon and get ready to deal some heavy damage. Alternatively, you can lead these hounds to a nearby pig village, and the pig men will start to attack them. You will lose aggro from the hounds, and the pig men will gang up on them and kill them.

Hounds are much less of a threat than they appear to be. They have low health and are easy to defend against. They’re more there to scare new players and remind you to be prepared for a fight now and then.