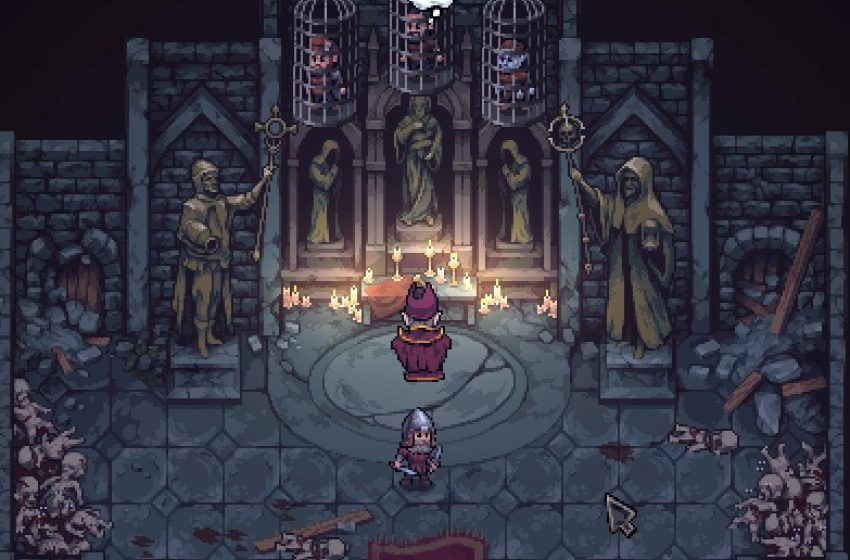 The first boss battle in Stoneshard puts you through your paces. You encounter them at the prologue’s end after you learn the basics of how to play. During this, you and your band of adventurers have been captured by cultists who are using the power of a Stoneshard, and you’re the one able to escape to save those who survive. Now, at the end, you face the cultist’s leader, and the game does not let up on you, which is the case for the rest of the game when it comes to healing, reading your map, and saving.

During the first stage of the encounter, the Archon summons a shield to protect themselves. You don’t need to worry about them right now. What you need to worry about is the two bronze statues on either side of the shield. The one of the left side produces small blood spouts underneath you that explode, covering the area in blood, which you need to dodge. It also fires out unholy spells at you, which you curse you, and you cannot evade. The statue on the right summons the undead from the massive pile of bodies and heals them. Of the two, you may want to go for the one of the left first because of the damage it produces, but both are good options to pick.

Run up to your statue of choice and start damaging it. If an undead comes up to you, take care of them, and return to the statue. If you seem small, blood particles jump up from the ground move to safe tile. These are the blood spouts from the left statue. After you take down one of the statues, they should stop performing the attacks and abilities tied to them, and the Archon delivers a small dialogue portion. Go to the other statue and do the same thing all over, dodging blood spots or fighting the undead that walks up to you.

After you take down both of the statues, the Archon transforms into a massive bat. As a bat, the Archon deals a great amount of damage. It has two notable attacks: beastial charge and phantom bats. When the Archon does any of these two attacks, you should see an outline of where the attack is going to go. For example, when it does the beastial charge you should see a small, purple line on the ground where it is going to attack. You want to step out of the way of this attack, and if you can aim it, try to line it up for him to hit an object in the room, like a wall or one of the benches. Phantom bats is tougher to dodge and does a significant amount of damage.

The Archon’s other abilities are a basic attack that you need to be in melee range for him to land, a jump away to create distance between you and him, and a corpse devour. The corpse devour ability makes this battle exceptionally difficult because the Archon can go up to any of the seven corpses in the room to eat them and heal. You dont have too many options here when fighting the Archon to prevent the healing except for consistently hitting him with whatever attacks you have available.

Weapons and spells to use

Your best option is to keep your distance against this creature. Melee attacks do a considerable amount of damage, but if you get too close, the Archon can hit you pretty hard with its abilities. You want to stick with using a bow and arrow, and any distance spells you can acquire during the early portion of the game. If you can increase your accuracy, the bow can deal a considerable amount of damage against the Archon, especially if you land a critical hit against it. You can increase your chances of doing a lot of damage with the taking aim ability. If you couple a bow with daggers and have the dagger’s passive ability quick hands, you can switch to your bow without having to waste a turn.

For those who prefer using a melee weapon, you may want to rely on a greatsword or a sword and shield. A greatsword can do some substantial damage, but you expose yourself to being hit pretty hard, which is a tradeoff. But, if you use a shield and sword, you might be able to last longer against the Archon, granted you can’t do as much damage. Using the raise shield ability can help against some of the Archon’s massive attacks, though. Try using the fire barrage spell when the Archon is at far enough distances to chip away at its health.

When you face the Archon, you will find a challenge. But, when you beat him, you’re ready to start playing Stoneshard and choose your character to try out in the game’s open world.