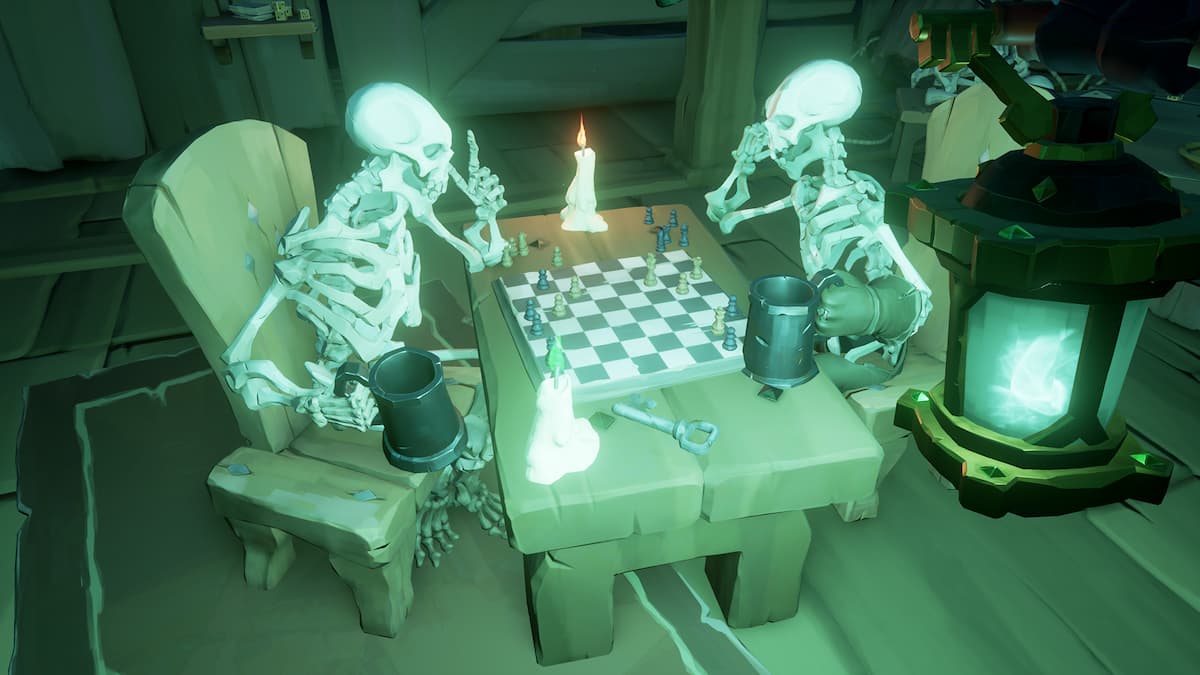 In the town of Sailor’s Grave in Sea of Thieves: A Pirate’s Life, you will find an intense and apparently eternal game of chess between two skeletons. You will find this game in the bottom deck of a shipwreck, which you can find an entrance to near the tavern. The two skeletons are at a standstill, so you will want to wake them up by lighting the candle on the table with your Flame of Souls. One skeleton has some rum to drink, but the other one is dry — it’ll need Captain Bones’ Special Recipe, which you’ll need to retrieve yourself. You can then finish the chess game up with the help of Captain Cursed, so make sure you still have his head.

To find this “special” concoction, go back to the pulley-operated elevators you used to retrieve Captain Cursed; you can get there by walking on the bow of the split shipwreck, going down to the water, swimming through the water and then through the cave. Take the elevator up — let go of the pulley and get off the elevator before it falls back down. Use the next pulley to lift up a new platform for you. Jump across, then go up the stairs on the right to activate the next pulley.

You will want to move the two platforms so you can jump into a hidden cave from the right platform. Inside the cave is a bottle containing Captain Bones’ Special Recipe. Grab the bottle, open the door from the inside, and go back to the chess game.

Pour the Special Recipe in the tankard — the skeleton will drink too much until its head explodes, but at least you’ll get the A Powerful Thirst commendation. After that, you will need to buy into the game. You can only do so with Poor Dougie’s Medallion. Place it on the chessboard, and then place Captain Cursed on the headless skeleton; he will handily win the chess game.

Your reward will be a Ship’s Key — return to the first pulley-operated elevator, then go up to reach the door it opens. You will get the Ship of Thieves commendation for opening the door and can take all of the gold that’s inside. Before you leave, be sure to angle the sails — this will allow you to point the lighthouse at a beacon behind the sails to get to the Headless Monkey shipwreck.