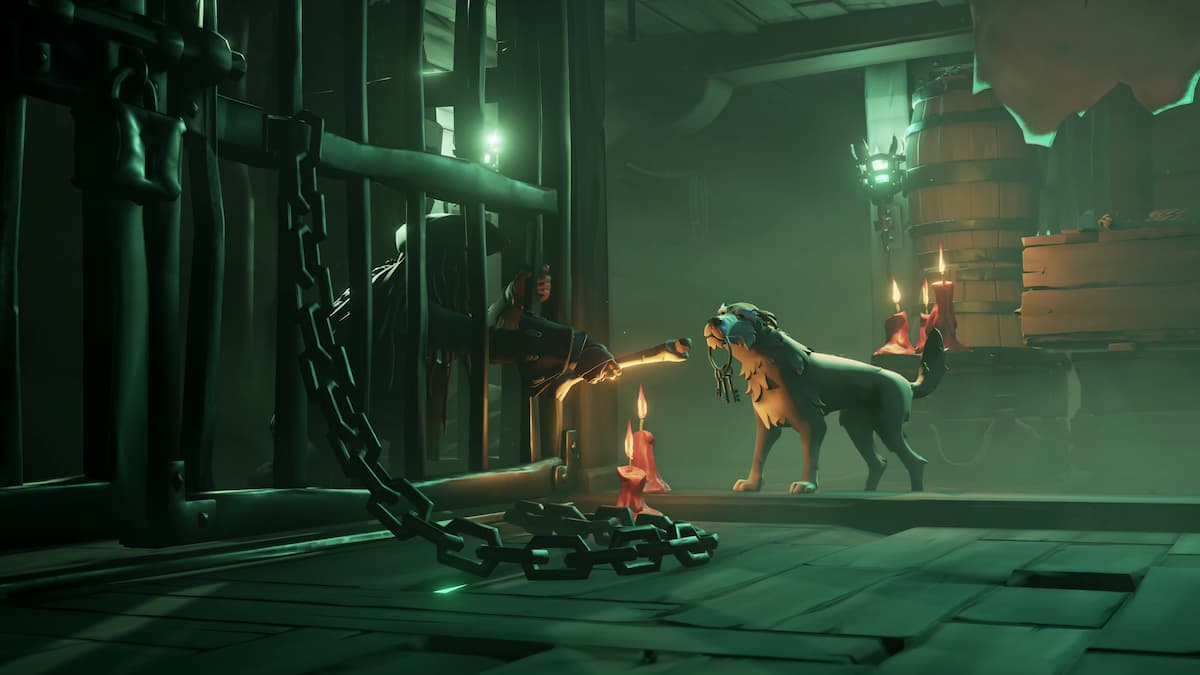 The Castaway will describe the threat that lies ahead and instructs you to sail to the green light. You will have a quest book in your Quests inventory that describes the green horizon, but you will be able to spot it easily from wherever you are. No matter which Outpost you start on, a large green beam of light shooting to the sky will indicate where you must go, and a green portal underneath will appear between a nearby massive rock formation. Sail through it, but make sure you don’t have any treasure on board.

The game will fade to black and you will be sailing on rails through the Tunnel of the Damned. Enjoy the spooky theme park-like sights and sounds, and you’ll be treated to a cinematic moment before entering another portal. Once you emerge and have control of the ship, look ahead to the island and sail towards the shore.

Park your ship and disembark; once you make landfall, keep running inland until you reach a cavern marked by a Wraith Statue — you can also use this statue to resume any checkpoints you have in this Tall Tale. The labyrinth ahead known as Dead Man’s Grotto will throw light puzzles at you. An essential piece to most of these puzzles is the Flame of Souls, a green flame that you will find up ahead in a campfire. Hold your lantern up to that campfire and hit the button press to take the flame. You will have to use this flame at various points in this Tall Tale to light lanterns and open doors. Search every nook and cranny for these lanterns — you will find lanterns under skeleton arms and in broken rowboats.

After watching Disneyworld-like scenes of ghost pirates, you will go up a spiral and reach a locked door. Next to it will be a hinge with a prompt that states “Needs a handle.” If you go back down the incline and spot a waterfall, go through the waterfall and to the right to find an immobile skeleton hugging an oar handle. Take the oar handle back to the hinge to repair this broken door lever.

After this segment will come some low stakes platforming; you will have to jump across gaps, but falling has little consequence other than wasted seconds, as you can come back up where you started. You will reach a capstan that you will turn to drop a drawbridge. Walk across the bridge and interact with a pulley to bring out a platform that will help you across a gap. Light a lantern at the end of the dock head on the left and another lantern before the capstan earlier to summon a ghost rowboat and open the next drawbridge, taking you to the next part of the Grotto.

Go up the spire around this pile of treasure to reach a short platforming section. Afterward, climb a ladder to a platform on the right; there will be a weapon box there. Make sure you have a sword equipped, as this is necessary for traversal ahead. Next to the weapon box is a rope that you can cut to lower a platform. Use a pulley ahead to swing a mast back and forth — jump onto the mast and let it fall to the other side. Then, cut another rope to lower a platform. You will reach a river — slide down to reach the next chapter of this Tall Tale.

Tales of the Dead

Take a right to reach a town known as Sailor’s Grave. The gate is down, so go up some stairs to the left and light a brazier to open it. There will be plenty to explore in this literal ghost town, but your main goal will be to free a talkative skull named Cursed Captain from a suspended cage. His cage is between two shipwrecks, so you will have to get high up to free him.

Go up the stairs on the left and go around the outline of the ship to reach the top of the back part of this ship. Walk across a makeshift bridge made of a broken mast to the front of the ship, then walk across the bow and drop into a hole. Swim through the water and through a cave and reach a pulley-activated elevator. Pull yourself up and then use another pulley ahead to make a platform for yourself. Next, go up some stairs to the right to use another pulley that will move two platforms; position them in a way so you can jump across them. Walk on the bow ahead and release the Cursed Captain by using your sword on the rope holding his cage, causing him to drop straight down.

Next, look for the key to the Captain’s cage; behind the left wrecked ship is a tavern where his mutinous crew previously separated. Go up a ramp and find a pulley on your left; this will lower a chandelier, where the key is sitting. Go back to the cage to open it, and you can pick up the Cursed Captain as your new companion.

Your next destination is the lighthouse — the bridge is lowered, but the Cursed Captain will berate nearby ghosts to raise it. Go up the dizzying stairs of the lighthouse and place the Cursed Captain on a headless skeleton on a chair. Climb up a ladder and light the brazier with your lantern to activate the light. Use the two wheels to point the light, the right wheel controlling vertical movement and the left wheel controlling horizontal positioning. There will be one torch ahead and two torches to the left to light from afar; this will get the attention of the Ferryman.

Take the Cursed Captain and his cabin key with you and safely get down from the lighthouse. His ship, the Golden Hare, is the one with the red sails, so head that way. Place his head on a skeleton next to the door to open it.

Make sure you’ve completed your journal collecting and other tasks before proceeding. You will need the Cursed Captain for a side quest.

Go all the way up the ship to the captain’s quarters and place the Cursed Captain on his original body. He will say his farewells and give you the cabin key to get to his rowboat.

Steer the rowboat to the Ferry of the Damned — row to the back of the boat and dock the rowboat there. Go to the right and climb aboard the top deck, right behind the Ferryman.

Now is the time to cause a bit of chaos — light the Well of Fates in the middle with the Flame of Souls from your lantern. This will cause a reaction and blow a hole into the ship, allowing you in the mid-deck. Go below deck and light lanterns ahead to open up the doors. One room will have sarcophagi that you must move the lids to reveal hidden lanterns to light. You will reach the brig and finally meet Captain Jack Sparrow himself. Retrieve the keys from the dog to free him, and follow Sparrow up to the top deck.

If you die in combat, you will simply respawn — remember that you’re on the Ferry of the Damned. Still, there are supplies middeck below you if you run out of food and cannonballs. Survive the battle and watch the plot with Jack Sparrow unfold. When the Tall Tale ends, exit the Ferry of the Damned through the door as you usually would, and enjoy the ride back to the land of the living.