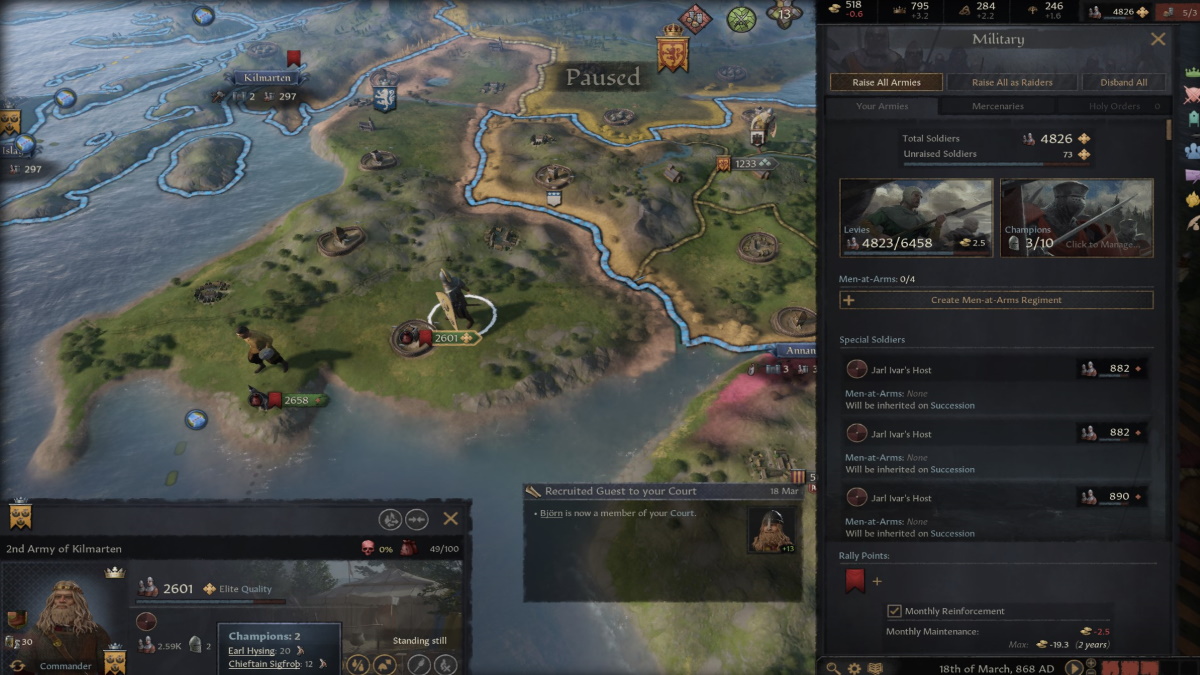 Your armies in Crusader Kings 3 can now have knights operating in them. Levies make up most of your fighting force, but the knights are among your most elite soldiers. They’re the best of the best, and they consist of key characters from your court. These characters do not serve as commanders of your army. Still, they inflict damage to the troops they face and make it easier to obtain victories.

How do knights work?

You can view who among your court is considered a knight by going to the military tab. Depending on what time and faith you are playing as the knights might be called champions. They mean the same thing. A knight performs better in combat for you based on their combat prowess. A higher combat prowess means the increased chances of them heavily damaging enemy armies and leaving the battle with little to no harm. There’s always a chance, though. If a knight dies, you lose a member of your court, so make sure it’s not your heir or someone with a strong claim to an important province.

Your ruler can only have a certain number of knights available to them. By clicking on the knight’s menu, you can determine who can be a knight or not. Forbidding a character not to be a knight does not decrease their opinion of you. This way, you can ensure the best characters with the highest combat prowess fight in battles.

How to get knights

When you want to recruit new knights to your army, there are several ways you can obtain new ones. A straightforward method is at the top of your knight’s page, where it says that you can invite knights to your court. You can do at the cost of prestige, and for the next several years, more characters enter your court as potential choices. At least three will arrive. If you like what they have to offer, you can pay them to join your court as a knight. These choices typically have some outstanding combat prowess, making them far more effective.

Alternatively, if you expand your territory, more characters join your court. The more who enter your court and willingly work with, you can potentially become a knight. You can pick and choose a bit more with a larger kingdom. But the characters who show up from a knight invitation are far more likely to have the best combat prowess to offer your army. Plus, they come to fight, not engage in politics.