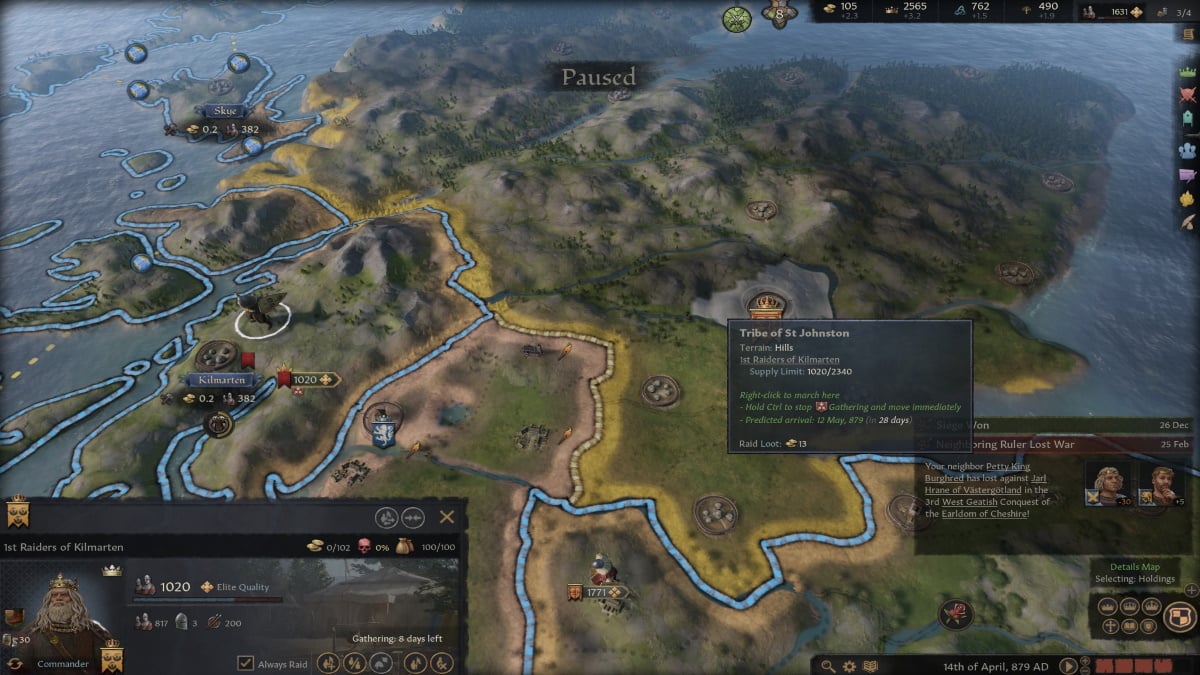 You won’t always be at war in Crusader Kings 3. Rulers who are not at war steadily gain money and some even grow used to the idea of not fighting. You can take advantage of that by taking a smaller host of soldiers to raid a province for a small amount of loot and prestige, and then return home.

It’s an excellent way to gain immediate gold that a province has acquired, increasing your ruler’s prestige. The amount of prestige you earn is one-to-one for the amount of gold your raiding party brings back to your realm. To start a raiding party, go to your military tab and make sure you have a rally point at a province you want to raid.

Click on the rally point, and it should take you directly to that province. The rally point tab on the lower right section of your Ui should give you the option to raise local raiders. You can do this with a sizeable army, but you usually want to use the option to Raise All as Raiders and go around the map. By hitting the Raise All as Raiders, all of your soldiers become raiders, and they go to the primary rally points. It’s better to have one, so have a single rally point on the province closet to the neutral location you want to hit.

Your army should show up as a traditional army icon, but they’re raiders, and they will only raid any neutral location they come across. The army should have three torches behind their primary banner, signifying they only raid. Place them on any available neutral province nearby and have them start raiding. Raiding a location takes a few days. You can pause the game to investigate other areas to hit to see how many gold they receive for their trouble. The raiding army’s tab has to be up to see how much loot they receive for raiding a specific location.

Once they’re done, have them return to any nearby province you own to receive all of the loot and renown they acquired. You can disband them at any time in the province you rule to return to their local duties. If you are running into trouble with raiding, it’s likely because the army you use for raiding is too low. You need a larger raiding party to bring back loot successfully.