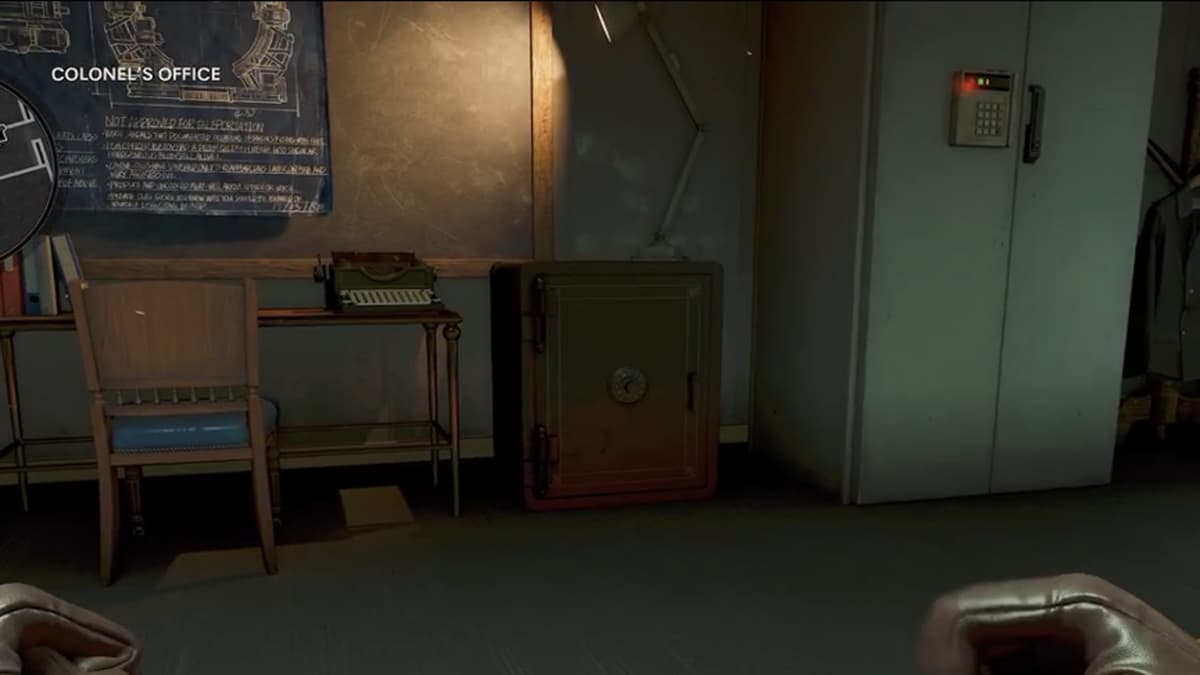 The secrets and Easter eggs in Call of Duty: Black Ops Cold War’s newest map Firebase Z are just beginning to be uncovered by the Zombies community. We have seen plenty of examples in the past where finding these oddities tucked away in the map would be very beneficial to players, whether it rewards them with a free weapon or perk.

In Firebase Z, there is a safe tucked away in the Colonel’s Office that can only be unlocked by doing a specific procedure. When opened, it will give a free random perk to the first person there. Here is how to unlock the safe in Firebase Z and get a free perk out of it in Call of Duty: Black Ops Cold War.

Before we can open the safe, we need to perform a few steps in the level’s main Easter egg quest. Turn on power by activating the three Aetherium generators and return to the starting village to talk to Ravenov.

After that, meet Peck in Mission Control, where he reveals he tricked you into helping him. Return to Ravenov to obtain a Key Card from him.

You need to open three cabinets throughout the map that have compounds we will use to create a truth serum. The locations are as follows:

You need to put that vacuum on an air conditioning unit to the right of the entrance to Mission Control. Go inside, and Peck will begin hallucinating and dancing.

When you get the prompt, speak with him, and he will reveal you need information from three turned individuals. Doing so would continue the main Easter egg quest, but this is where we diverge and go on our own path.

After Peck has been given the truth serum, we need to find Sergei’s decapitated zombie head. There are six total locations where the head can spawn, two in each defense zone. The locations are as followed:

When you find the head, you need to pick it up and deliver it to the Field Hospital. While you hold it, you cannot sprint, jump, or use anything, so if you get in trouble, be sure to drop it. Putting it on the ground to protect yourself will not cause it to despawn or anything.

You need to put the head on the charging plate near the rightside doorway in the Field Hospital.

Now go into Data Center and find the machine with the brain image on its display. This machine is used for collecting memories from past Omega operatives, even if they have been turned undead.

Four Essence Traps will pop out of the machine for you to pick up after interacting with the device. In the main Easter egg, we would be using these to capture specific Mimics, but we need a zombie for the purposes of opening the safe. You need to damage a zombie until they are as close as possible to dying. When done, throw the Essence Trap on the ground and activate it like you would a C4 to capture the zombie, like if it were a Pokémon. If they have too much health or if you pick the trap up before it says they have been caught, the device will break, and the zombie will be let loose. You will need to grab a new trap from the console and try again.

When you successfully capture a zombie in the trap, you have three minutes to take it to the Field Hospital and insert the trap into the device connected to the head. The head will begin floating and listing off combination numbers. Don’t worry about remembering the combination; this process is automatic. After the head explodes, go to the Colonel’s Office.

Next to the cabinet we opened earlier for a truth serum compound is the safe we need to interact with. When the door opens, you can grab a random perk from inside and a piece of intel.

Be aware that a bunch of hellhounds will begin to spawn and attack you. Make sure to grab the perk as the hellhounds are coming in. If you wait too long to grab it, the perk will disappear.