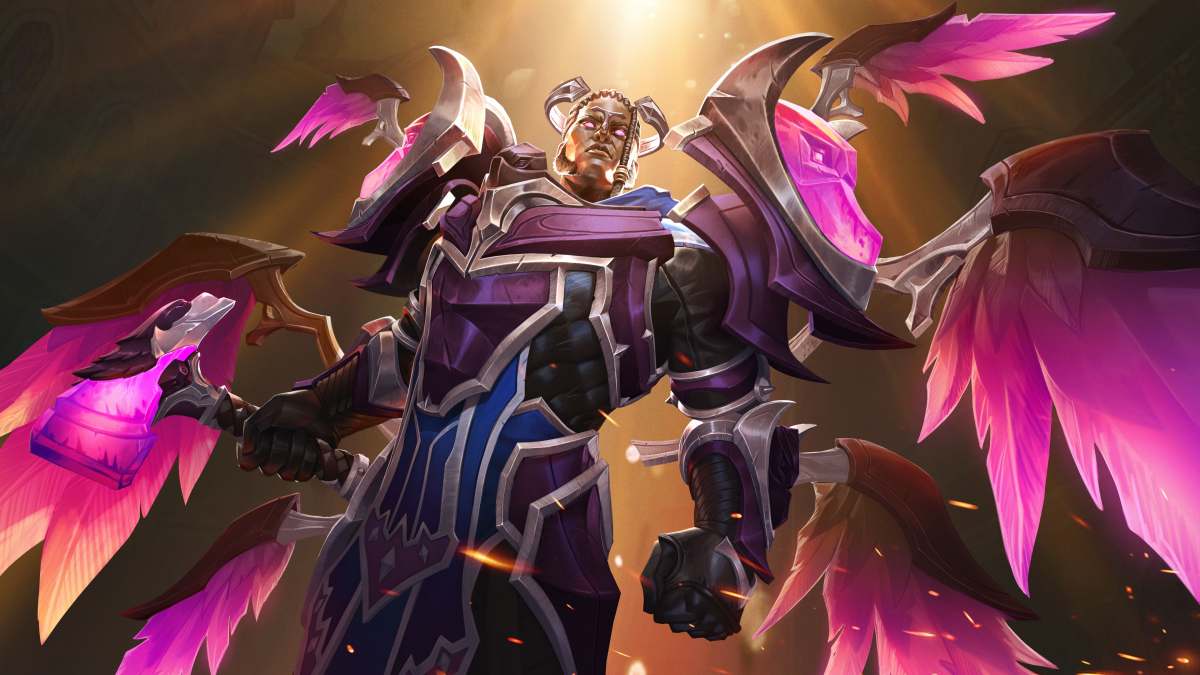 Azaan the Eternal is the latest tank Champion in Paladins. Blessed with a straightforward design, Azaan is at his best when he stays in the thick of combat, protecting his teammates and disrupting the enemy team with his angelic yet undeniably brutal abilities. In this guide, we’ll go over everything you need to know to start playing Azaan, including some basic gameplay pointers and example deck builds.

Azaan has 4500 base health, and his basic attack is a projectile with a three-strike chain. It has an average DPS of 560 with no damage dropoff, and cannot headshot. Azaan’s signature trait is his Ire passive ability, which gives him up to 20% increased damage resistance for dealing and taking damage. While above the 85% Ire threshold, Azaan’s basic attacks deal 12% more damage and explode in an area-of-effect. Like Furia’s Wrath, Ire decays over time and is also consumed by abilities. Using an ability while above the 85% threshold gives it a stronger Augmented effect. Unlike some resource-based Paladins Champions, Azaan can always use his abilities, even if he has no Ire banked.

Despite the infinite range of Azaan’s basic attack, he is a point tank and should stay in the vanguard to ensure his Ire remains stacked and his short-range abilities land effectively. Speaking of abilities, Azaan has access to a very flexible toolkit:

The best thing about Azaan is how uncomplicated he is. Like a proper Paladins tank, all he needs is to get in the thick of things right away, and he is guaranteed to fill up his Ire bar quickly and get boosted resistance and boosted damage output. That means that — as with many other Paladins tanks — taking five copies of the max health card (Tools of Salvation in Azaan’s case) is a must in every deck you make. A strong all-comers deck for Azaan would look like this: Tools of Salvation x5, Grim Deliverance x5, Duty is a Mountain x1, Depths of Despair x2, and Ad Eternum x2.

Perhaps Azaan’s design is a little too straightforward because he also has a very clear choice for what talent to pick. Persistence is the best pick because it gives him even more damage resistance and self-sustain, with no drawbacks. By comparison, Tempering effectively cancels out its own benefits by reducing the frequency at which you get to use your abilities, and Eternal gives you a very situational perk at the cost of losing a persistent damage buff.

When using Tempering you get to cast souped-up versions of Azaan’s abilities. However, they will have noticeably longer cooldowns. The bonus ability effects of Tempering are not that good, which makes Tempering a poor talent choice by default. Still, if you want to use it, Reckoning is a good ability to build your deck around since it innately lowers its own cooldown when Augmented. An example of a good Tempering deck is Tools of Salvation x5, Righteous Fury x4, Deadly Edict x4, Gathering Power x1, and Flames of Wrath x1. With this deck, the chain effect of Righteous Fury and Deadly Edict will counter-act some of the drawbacks of Tempering.