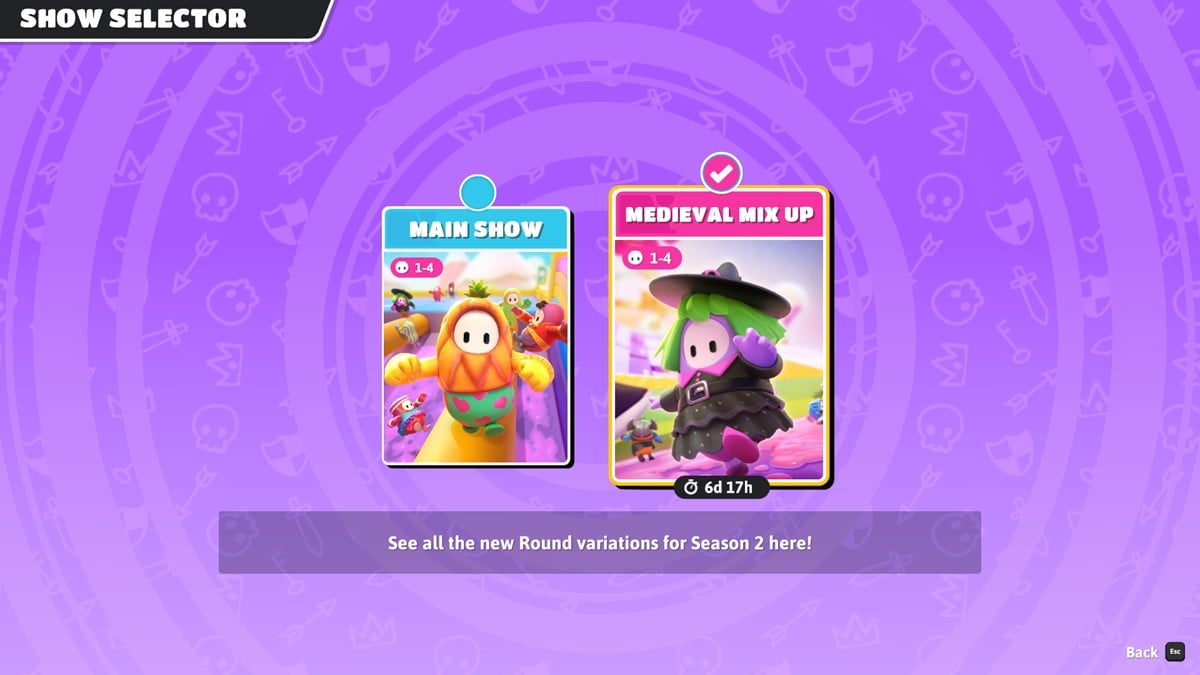 Several changes were brought to Fall Guys in the Season 2 Mid Season update, like adding usernames back into the PC version of the game, and a new Round Game call Big Fans. That said, there was also a stealthier change: A change to the queuing system. This changes the way that players use and interact with the Show Selector and how queuing works in general. It also foreshadows some possibilities of what’s to come. Here is how to use the updated Show Selector in Fall Guys.

When you load up Fall Guys post-season 2 mid season update, you will automatically be queued for multiple shows. There is no alert saying this, so if you are used to logging in and hitting play without thinking, you could be thrown into a Limited-Time Mode like Medieval Mix Up or Slime Survivors without realizing it.

If you are trying to once again queue for multiple shows after only queuing for one, check off all of boxes to have an equal chance at getting into any show based on their queue rates. This will get you into games faster if you don’t care which show you play.

Queuing for One Show

If you only want to play the main game or a specific LTM, make sure to clear all other checks from the Show Selector. Once you only have the preferred show selected, the queue will work the same way it did before the update. If that is you preferred queue-style, you never need to use multiple queuing, it just takes an extra click to check one mode and un-check the other. Don’t forget to un-check, or you will be queued for multiple again.

If you don’t check any boxes, you can still navigate the main menu, but instead of having a play option, you will have a message in a red box reading ‘No Shows Selected’ that cannot be selected. You will have to select at least one show in the Show Selector in order to queue for play again.

Lastly, an interesting thing about the new queue system is it says queue for ‘Multiple Shows’ rather than ‘Both Shows.’ This hints that in the future we may see more than two shows in the Show Selector. Whether that means they may give players multiple LTMs at once, that they may add another permanent mode type in the future in addition to the LTM, or it’s just inclusive wording in case that do but it never comes remains to be seen.