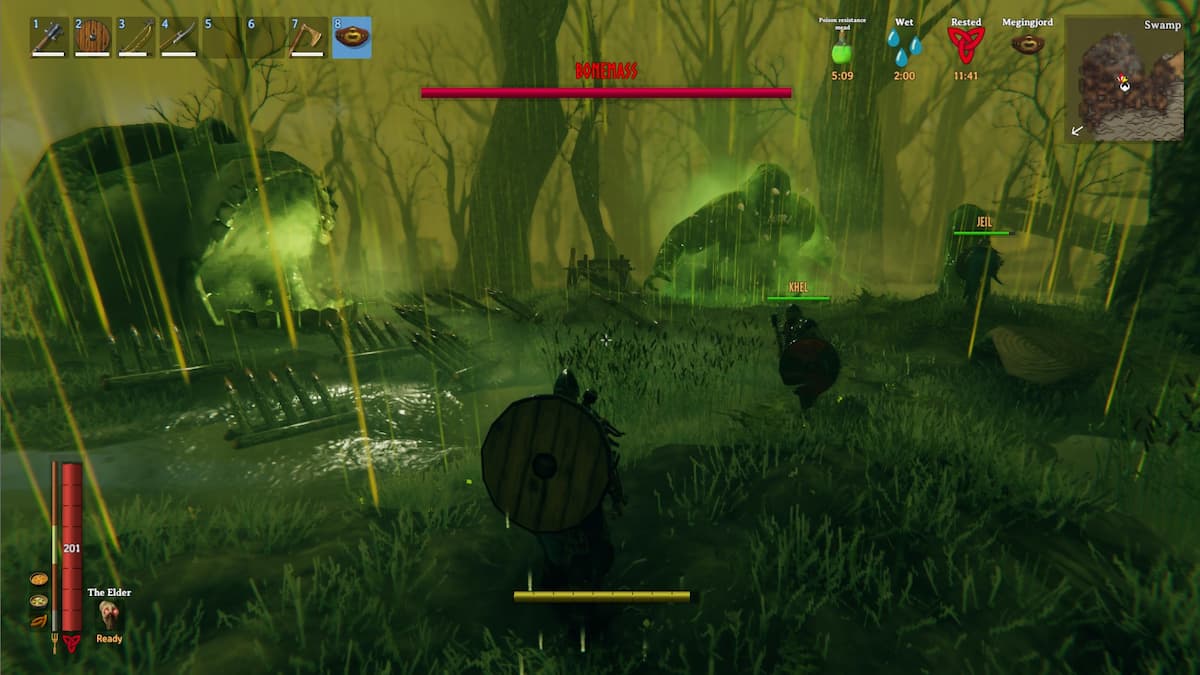 Bonemass is the third Forsaken boss in Valheim. It’s a massive pile of goo that you’ll fight against that has several annoying mechanics that can eat away at your health. We highly recommend you attempt to fight this boss with a friend or two, but it is possible to defeat it by yourself. We just don’t recommend it.

Before you set out to battle it, you’ll want to make sure you have plenty of poison resistance mead, healing potions, and a blunt weapon, which will probably be the iron mace. Some players might be able to bring in Frostner, but it’s extremely likely that you won’t. If you’re brave enough to attempt to withstand the brutal winter wastes of the Mountain biome, you might be able to kill a few drakes to craft frost arrows, which are extremely good against Bonemass.

How to find Bonemass summoning altar

Like the other bosses in Valheim, you need to find Bonemass’ runestone to find its location. You can find it inside any of the Swamp Sunken Crypts. You won’t be able to access these sites unless you a swamp key, and you can obtain those from defeating the Elder, the second boss of Valheim. It’s a guaranteed drop, and the swamp key doesn’t disappear after you’ve used it on a crypt.

How to summon Bonemass

When you learn Bonemass’ location, you can expect to find its altar in the middle of a Swamp. You need to toss in 10 withered bones when you arrive. You can access these bones by breaking down the muddy scrap piles inside of crypts. These scrap piles also contain iron. You might find a few bones tucked away in the corners of the crypts.

How to defeat Bonemass

Bonemass is a large adversary. It’s both tall and relatively fat, which means you and your allies have a fairly big target to attack with a hefty hitbox. This gives you plenty of room to it the creature, but it can also reach out and hit you.

You and your party members primarily want to stay away from the front of Bonemass during the fight. It has three attacks that it uses during the engagement. The first and most annoying of them is where it upchucks a massive poison cloud in front of it, spewing it all over the ground. You’ll notice it’s about to unleash it as it pulls its head back and then releases onto any target in front of it. The attack does damage over time, and it can truly make or break a team or engages Bonemass too quickly. Make sure to have your poison resistance mead active at all times. The mead lasts for 10 minutes. It does not prevent you from taking poison damage, but it lowers the damage over time tick by at least half.

The second attack is an enormous swipe it does to any target in front of it. The swipe is a forward arc that performs right in front of it, and the attack can hit multiple targets. If you plan to use a teammate as a tank for the fight, we recommend using the iron tower shield or the serpent shield to protect themselves from the attack.

The final attack is a ranged throw that Bonemass does. You can see it happening from a mile away, so players shouldn’t have too much trouble getting out of the way or dodging it at the last second with a well-timed roll. You can also block the attack, but given how easy it is to predict, rolling away from the attack is a preferred tactic.

Overall, Bonemass is a slow-moving boss. You’ll want to make sure you clear it out from any additional enemies and prevent more spawns from occurring, so make sure there are no bone piles or Draugr camps that could cause even more trouble for you and your team. Bonemass will summon blobs and oozes to the fight, so you’ll need to take care of these throughout the fight. If you forget about them, chances are they can swamp you and stack the poison damage, quickly ending the battle.

You can hit Bonemass with arrows, although they don’t do too much damage, but the frost arrows will slow it down. The frost arrows also work against the summon blobs and oozes. You want to have a small pile of these in your arsenal, especially if you send one of your allies up against it. So long as you and your teammates have iron maces at the ready and upgraded iron armor, you should have little issue tackling the third boss in Valheim.

Upon defeating Bonemass, you’ll gain his head as a trophy that you can take back to the summoning circle where you dropped at the start of the game. You’ll also gain the handy item called a wishbone. It allows you to locate the hidden treasure in the game, and you can locate silver ore.