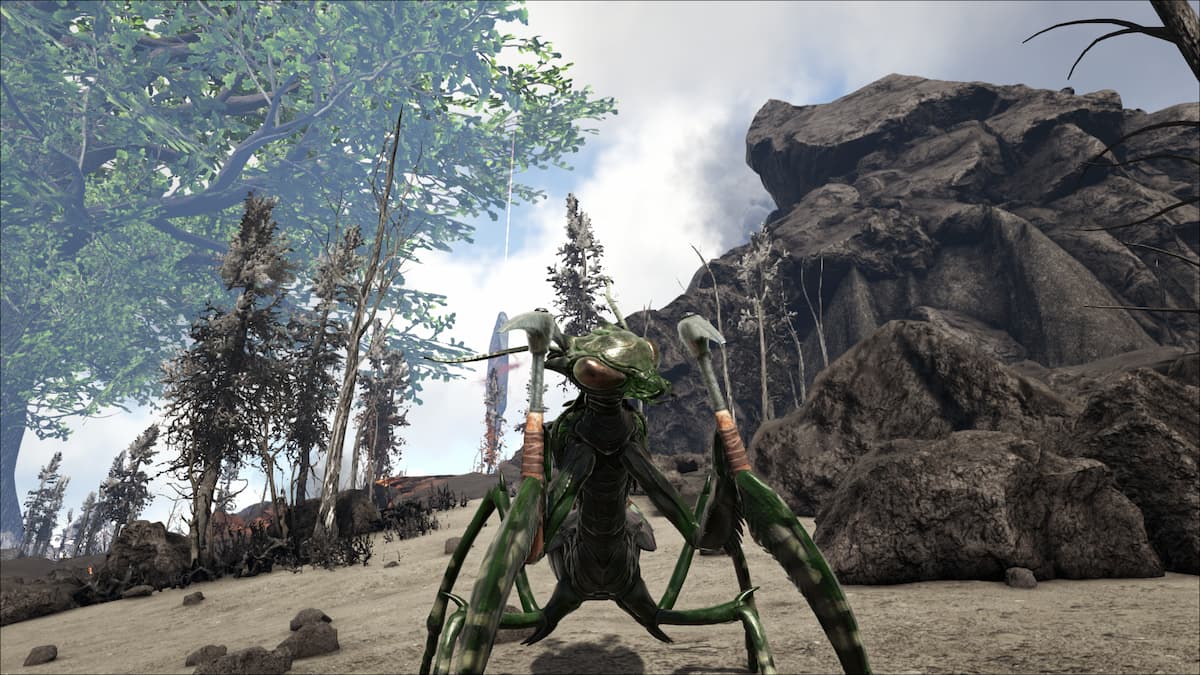 There’s not much to be said about the Mantis other than it is large, aggressive, and hits incredibly hard. This overgrown bug can potentially change your farming routine in Ark: Survival Evolved and how you defend your base as a whole. The Mantis, while not the most attractive of creatures, is something that every seasoned and new player to Ark should invest in taming and breeding out to create a strong line. This guide will show you how to tame a Mantis in Ark easily: Survival Evolved.

Where to find the Mantis in Ark: Survival Evolved

The Mantis likes to lurk in groups around the desert and volcanic biomes, and they’ll actively go out of their way to ruin your day while you’re doing other things. With a leaping attack that will deal way too much damage to the unsuspecting Survivor and the sheer number of them traveling together, taming this creature can be challenging. The Mantis is, fortunately, though, not difficult to find at all as it is present on quite a few maps, including:

Related: The 15 best Dinosaurs to tame in Ark: Survival Evolved

How to tame a Mantis in Ark: Survival Evolved

There are two different ways of taming a Mantis in Ark: Survival Evolved. One includes time, effort, and often pain, while the other requires nothing more than a short flight and a dip in the ocean.

To tame the Mantis, players must approach it while it is still awake, meaning that this is a passive tame, and because the Mantis is a default aggressive bug, you’ll have a lot of trouble doing so. The original strategy with the Mantis was to acquire a Deathworm Horn, put on your best Ghillie Armor, consume Bug Repellent and crouch up behind the bug as it skittered across the terrain, hoping not to be spotted. While this strategy does work, it requires a lot more effort because you first need to kill a Deathworm.

The more straightforward method of taming the Mantis involves first having a Wyvern. The easiest way to get a Wyvern is to play on the Crystal Isles map, where you can passively tame the Crystal Wyverns flying there. Alternatively, you’ll be able to steal an egg and raise one usually and then use it for everything Wyvern-related.

Head to the Mantis biome location you’ve selected; please note that this method is unlikely to work well on Extinction as there is little to no water on the map deep enough. Once you’ve selected your Mantis, grab them with your Wyvern. Once in your Wyvern’s talons, the Mantis will not attack, and you can safely carry them out to the open ocean. As far as possible, try to drop the Mantis in clear water as the Megalodons will try to kill it and you. Once you’re in the water, the Mantis will not attack you.

You can then passively feed it one of the following foods:

Note that you must be level 40 or higher in order to tame the Mantis. You can acquire Spoiled Meat quite easily by killing either the Vultures or Pulumonoscorpius, which are found in the same area as the Mantis.