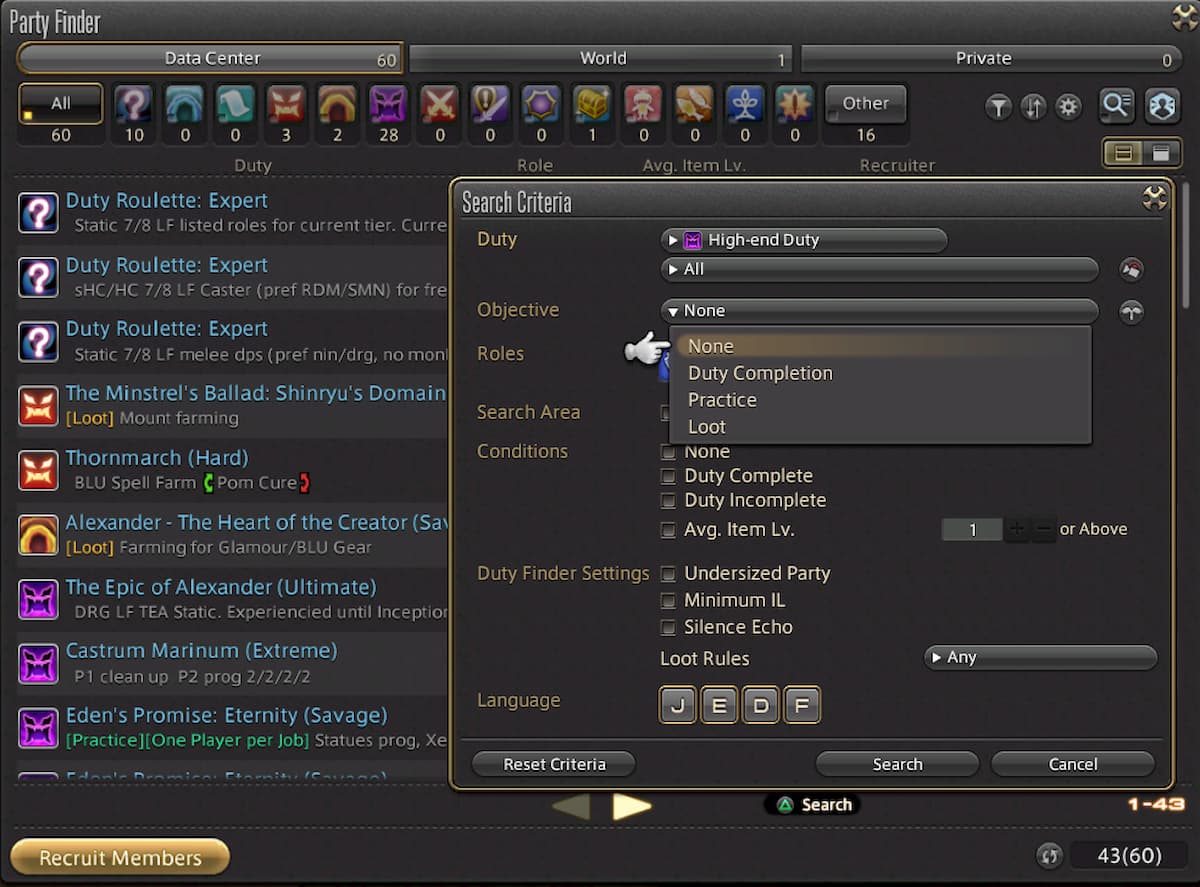 It’s not just for battle content, either. The Party Finder, at least on North American servers, is a data center-wide assortment of Craigslist ads in Final Fantasy XIV, each available at a quick glance. Crafting and gathering services, role-playing advertisements, house party invitations, raid static and Discord server recruitments, angry complaint messages that no one cares about, or even more suggestive solicitations are all part of the Party Finder ecosystem.

As a party leader, you can specify exactly what you’re looking for. Whether you want to practice the latest extreme primal that just released, or you’re looking to clear a savage-level raid, the Party Finder is for you. Near the top, you select whether you’re looking to recruit for a specific dungeon, trial, Alliance raid, or PvP match. Then you go down the list to further specify your party’s requirements.

In your custom comment, it helps to include any other useful information. Certain battle strategies the party will use, or anything else that your party members need to know before joining. You can then customize the rest of your criteria, adding challenges such as minimum ilvl or running the content without any bonus Echo aid after wiping. When creating a private group, you will also make a four-digit password. Sharing this password with your friends will allow them to join the party under the Private tab. Once you’re satisfied with your criteria, select Recruit Members, and your ad will appear on the Party Finder menu.

When jumping into a Party Finder group, it’s important that you carefully read over the party leader’s criteria. Even when joining practice parties, some party leaders will ask that you have a certain amount of experience, or that you watch a specific guide for boss mechanics. It’s common for new players to not understand the party’s goal based on the Party Finder’s description. But when you join these groups, the party will expect you to know what everyone’s aiming for.

You can also use the search option in the upper-right corner. This will allow you to narrow down your search, displaying only the groups you’re looking for. Whether it’s for a specific duty with exact criteria in mind, you can tell the Party Finder to only show what you want to see.

You’ll join practice parties until you get a handle on things, then clear parties to get your first clear, and then farm parties once you’re confident with your performance. It is generally frowned upon to join clear parties as a fresh beginner, or farm parties after only beating the fight once or twice. The same goes for joining a farm party, getting your loot after one run, and immediately leaving the group (loot and scoot). This is extremely rude and will leave your party more than annoyed with you. Make sure you have time to dedicate yourself to a few farm runs.

Know your limitations, and only join Party Finder groups that line up with your experience levels. If you’re not up to par, or the party keeps wiping because of you and other people, you can expect to get kicked from the group or for the party to disband. Consistently ignoring Party Finder specifications will earn your character a bad reputation on your server and data center, landing you on players’ blacklists. You will be unable to join groups created by players who have you blacklisted. Anyone on your blacklist also won’t be able to join your groups.

As we mentioned before, Party Finder isn’t just for battle content. You will also find an assortment of “other” ads at the bottom of the page, or within the Other category near the top. We advise caution when navigating these groups, as it is common to see age 18+ content advertised here. This is especially rampant late at night during North American hours. Players are generally fine with specifying that this content is not for minors, but you should still be careful.

Most of the time, though, you will see harmless ads inviting players to fun cafés, or other themed gatherings at their houses. You’ll also find players looking to buy or sell items away from the market board, expert screenshot-photographers offering their Group Pose services, or just sweet messages from random people. This is also a great way to find Final Fantasy XIV-related Discord servers you might be interested in. These social Party Finder groups can lead you to new friends or groups beyond the usual free companies and linkshells around.