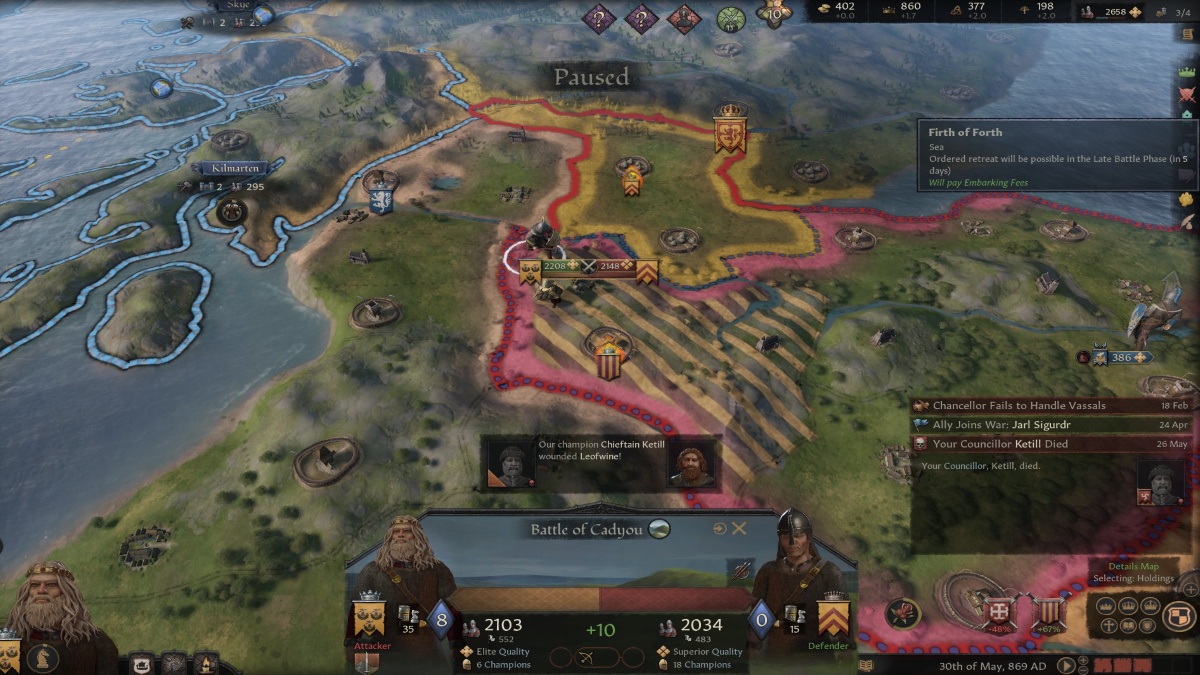 War is a common way to win political arguments in Crusader Kings 3, and the winner of the war always has the last say on the matter. A war might occur because peasants have tired of how you treat them, a vassal has a claim to a piece of land you control, or another country quarrels with you. When war arises, you and your allies can band together to take on another threat to complete it.

How to win a war

When a war occurs, the primary house you face will have their flag as the war banner. You can see it on your screen’s bottom right, where it shows two swords behind it with a number underneath it. That number is your war score. If it’s negative, you are losing the war, and if it’s positive, you’re winning. When you click on the banner, you can see the two primary houses that are warring one another and any allies next to them. You can also see each side’s relative army sizes, giving you a good indication of how powerful they are.

There are multiple methods to winning a war, but it all comes down to increasing your side’s war score. You or your allies can contribute to that total score. There are three ways for you to end a war.

How to increase your war score

When battling in a war, you want to increase your side’s total war score. There are four ways you can do this:

The objectives of war can change. For example, if you are attacking an enemy nation for a claim on a particular De Jure or Title. Then you want to capture and hold as many counties in that De Jure and Title to claim victory. If you claim all of them and have won most of your battles, you can usually end the war by enforcing your demands. This earns you more war score than attacking random portions of an enemy’s nation and taking them over.

You can view war’s objectives by clicking on the war banner on the bottom right of your screen. The middle part of the screen should say what the war is being fought over, such as the Lower Silesia Claim on the County of Praha. Click on the County of Praha, and the area will be highlighted on the map to show you the main objectives.

Always double-check the war banner before directing your forces to fight the enemy. It’s sometimes better to avoid the attacking army entirely to claim the land you want to call yours. You always want to view the war banner when entering a war to assist allies in your alliances.