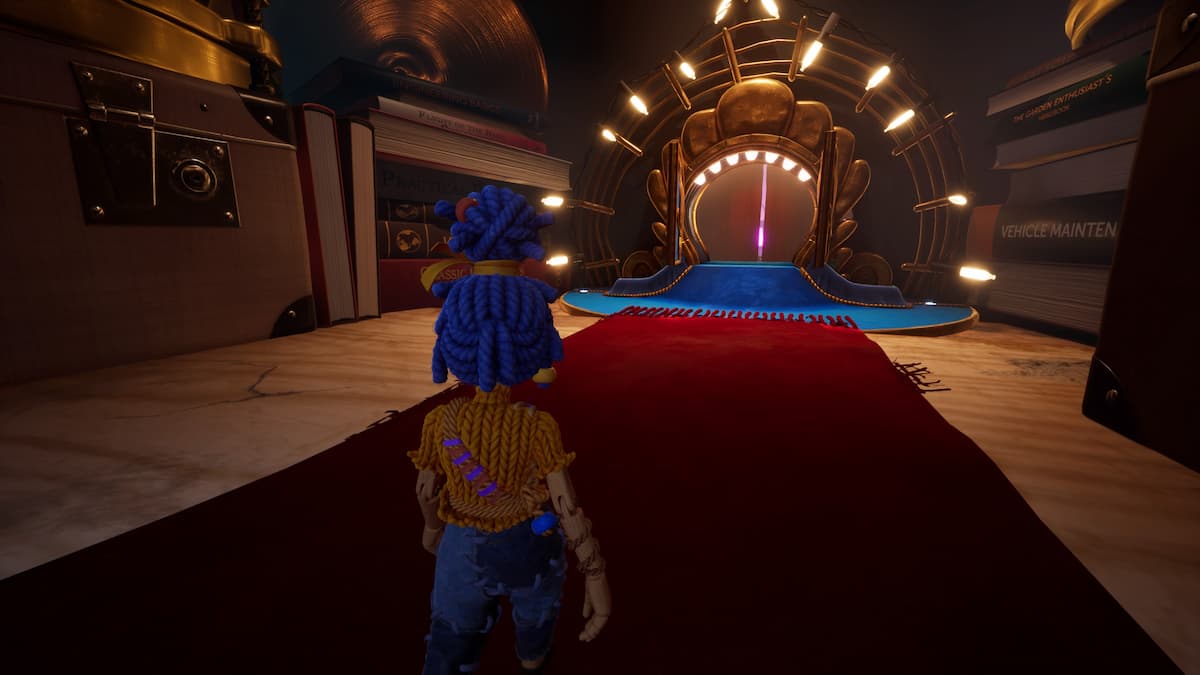 The final chapter in It Takes Two takes a deep dive into a former passion of May. Both Dr. Hakim and Cody attempt to revitalize her previous love for music in The Attic chapter, and this part of the story has May and Cody putting together the ingredients for a grand performance. This music-themed level will have May using her voice and Cody utilizing a cymbal to progress through some tough puzzles.

There isn’t too much going on in the attic itself, although this area will become a small hub for accessing the later areas in the chapter. For now, you can play around with a merry-go-round and the Slotcars minigame before advancing to the left of the minigame by pulling a lever together.

The main gimmicks in this chapter are May’s voice and Cody’s cymbal. May can use her singing voice with the right trigger to activate certain objects — this has limitations indicated by a bar at the bottom of the screen — or she can aim with the left trigger and unleash a scream with the right trigger. Remember that screaming and singing have different functions.

As examples of how May’s powers differ, the first two puzzles after Cody opens a door with his cymbal involve these two different functions. There will be a set of CD platforms that are too hot and fatal to jump on; have May lead the way while holding the right trigger to sing the heat away and make the platforms safe to use. Then, you will encounter microphones and speakers; have Cody stand on the speaker and have May aim at the microphone and scream to launch him.

Once you make your way into the jukebox, you will play through a fun bit with a microphone and a portable speaker. Have May scream into a mic to open a trapdoor for Cody to fall into. He then has to pick up a portable speaker, and May can scream into a mic above in front of a window for Cody to relay that scream to anything in front of him. Have fun destroying the entire circuit board to make your way to the end of this bit; leave the portable speaker in the very front pointing at the wall ahead, and have Cody push up the dial to maximize volume — then, May should scream into the mic and let the wall have it.

The next tough spot will involve a platform that May will have to control with her voice. Have Cody stand on this platform with four colorful arrows on them; these will correspond with four microphones for May to scream into. Basically, May has to direct Cody to the other side, around a bunch of speakers in the center of the room. So for example, the pink D arrow on the platform is pointing south; screaming into the pink arrow will push the platform forward, as it blows air towards the south. At the same time, there are lasers that Cody will have to block with his cymbal while he stands on the platform.

Next up, enjoy some neat puzzles that have Cody turn two dials to help May traverse through a side-scrolling sequence. Then, balance on some wind chimes to help Cody get across as well.

Your main enemies will come in the form of microphone snakes. If you get too close, they will chomp you up and kill you instantly. They have a glowing orange power source for Cody to hit with a cymbal, but to expose it, May has to sing (not scream) for it to open up, while also disorienting the snake. Keeping distance while coordinating against every snake will help you survive, especially when you get into trickier segments that involve rope swinging and rail sliding. Have May lead the way to keep the snakes at bay.

After surviving an intense action scene, it’s time to make some music. There are three soundboards in front of you, and you’ll walk on them and hit buttons to make an instrumental. It’s a bit unclear, but you can complete this by hitting the buttons on each soundboard until the wires going to the play button are completely glowing. After this, ground pound the play button to progress.

The following sequence can be frustrating without the proper coordination. May will have to control spotlights to guide Cody through the darkness, which will damage him if there is no light on him. Moving the light can be a bit sensitive, so find the right speed to have the light properly follow Cody as he runs forward and jumps across gaps. Eventually, you’ll have a red light along with your green light, and you will have to shine a light on switches in order for Cody to get past some areas.

You will return to the opening attic hub from Setting the Stage. A new area on the right will open up, revealing the Chess minigame, but you can also get some verticality and find the Musical Chairs minigame. Then, go what appear to be the gates of Heaven to go on your way to gather an orchestra for the performance. Play around with some giant instruments — when you reach the recorder, have May scream into it to activate a rope for Cody to swing on.

You’ll encounter some deadly waves coming from an accordion; to get past this, Cody has to have his cymbal out as a shield, while May has to stick close behind him.

Then, have May scream into trombones on the left and right side to lift platforms for a short amount of time; coordinate as Cody jumps back and forth. He can then pull a lever at the end to activate all of the platforms for May to get across.

You might not be permanently dead, but it sure looks like heaven here. There should be an orchestra in this area, but they all seem to have been kidnapped, imprisoned in domes on opposite ends. Luckily, you’ll have new flying powers, along with your same musical abilities. To unlock either dome, collect all musical notes flying in the air. Meanwhile, you can earn the Meditation Maestro achievement in a tent in this area.

The dome on the left will be a bit of hide-and-seek. Half of the orchestra is in a cage, and some flying demons have the two keys to it. They will hide in the fog, and you will have to uncover them underneath by getting these nearby clouds to rain the fog away. Use May’s voice to move the clouds around and throw Cody’s cymbal at them to have them release water. Look for two trapdoors and then battle the demons to grab the key. Do this yet again for the second key.

The dome on the right will have you in a dog fight. There are demons scattered all around, and you will have to track whichever ones have the key — indicated by glowing pillars — and attack them to steal it away. However, keep in mind that the other demons can do this to you as well, so be wary and fly with caution. Go straight for the cage once you grab a key, and split up to cover all the distance; ideally, you should get a key each to save time.

After completing both domes, find the Volleyball minigame and then reunite the orchestra

It’s time to gather up an audience for your performance now. When you return to the attic hub, go to the right; you can check out some pictures on a reel viewer, play the Track Runner minigame, or simply go through the vent to progress.

Enter a club populated by glowsticks as you begin the search for an audience. First, you’ll slide through a cool, psychedelic Rainbow Road rip-off. Dr. Hakim will even pick you up like Lakitu if you fall off.

After some tricky wall-jumping and platforming, ground pound a disco ball and prepare for a tough little sequence. Run backward to keep up with the rolling disco ball, all while avoiding these dangerous and damaging glowing pits. You might think you’ll have to dodge roll to avoid these, but jumping over them is actually the safest method to take, as rolling may result in you rolling off the disco ball.

Take an elevator up and you’ll find yourself in the hot seat. As the two new DJs, the glowsticks are not very impressed by you, and you’ll have to win back the crowd. There are four little stations here for you to use; on the front left is a turntable that you rotate the right analog stick for scratching. On the front right is a fog machine that has you mashing a button. The back right has some dials that you move around with the right analog stick up and down, while the back left has a drum machine that you play with using timed button presses.

In between, as you attract crowd members, you will have to stand on flashing platforms and play a Guitar Hero-like minigame, hitting the buttons as they drop down on the note highway. Fill up the club and get the meters in the center all the way up to win back your audience.

Enjoy your last moments with May and Cody.