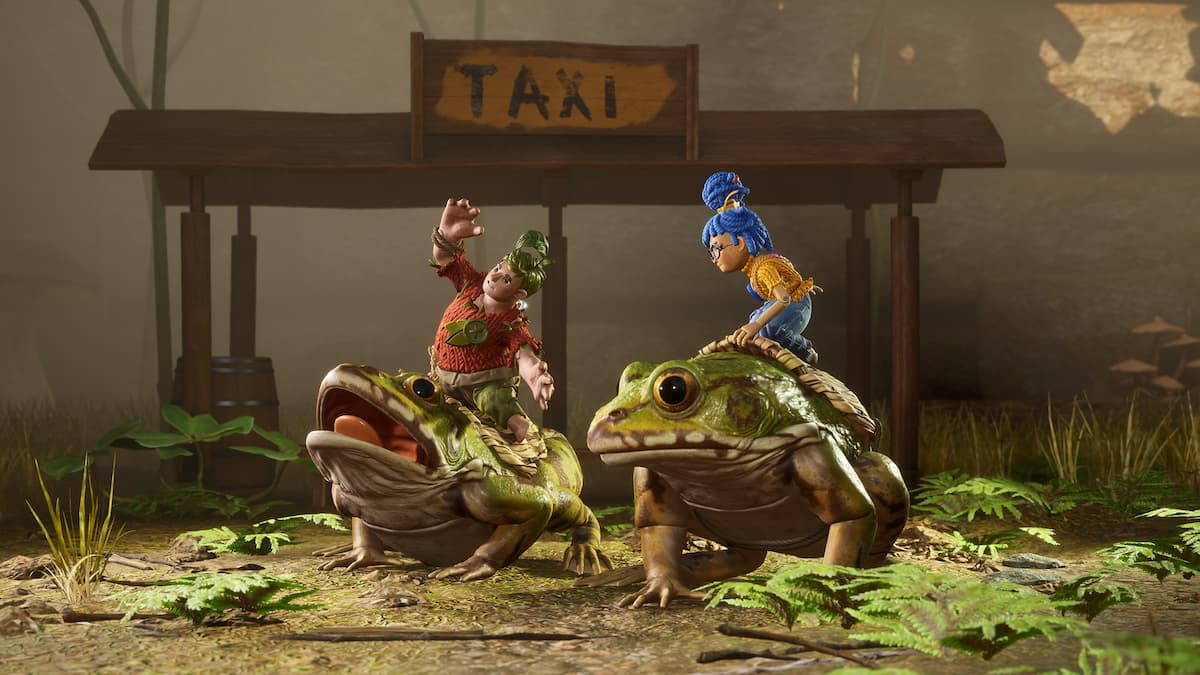 Everyone has had a passion that they abandoned at one point — for Cody in It Takes Two, it was gardening. This penultimate story chapter will take May and Cody through a garden corrupted by neglect and dysfunction. It’s very Honey, I Shrunk the Kids, with nature producing many dangers to conquer.

While May will now have a scythe and water cannon for some practical gardening, Cody’s ability is pure body horror, as he can shoot out a vine and also transform into different plants. May can water the soil in pots, and Cody can ground pound the soil to transform; for example, he can turn into a dandelion to float across. But overall, this will be a combat-heavy chapter, as you will see ahead.

One plant transformation for Cody is turning into a cactus turret; it hilariously shoots out needles and reloads like a gun, but unfortunately, there is no visual indication of ammunition. Even without the turret, you can use your vine, and May her scythe, for the enemies to come. There will be infected wooden creatures to fight, with some variations; flying ones can be pulled down by Cody, and shielded ones require Cody to grab their shield while May slices them from behind.

A later puzzle will require Cody to transform into a vine. It may look like May has to grind on the vine, but Cody actually needs to grow leaves for May to use as platforms. In general, shoot water into blue plants and avoid purple sludge. The Burrower boss battle will have some of the same principles for fighting normal enemies; grab it with Cody’s vine for May to unleash her scythe on. However, be wary of waves of enemies. It may be wise to clear out the minions first. After defeating the Burrow, be sure to not miss a sign pointing to a bug spa to get the Bug Sized Relaxation achievement.

This next section may be difficult if you have an aversion to spiders. May and Cody will find two spiders to use as mounts, and these crawlers can defy gravity by walking around trees with light-colored bark and go completely upside down by shooting a web above them with the right trigger. You will encounter purple goo that May needs to spray with water for Cody to progress.

You will have have to eventually abandon your spider friends, getting into another heavy combat section. After the chaos, you will slide down and find yourself in the burrows.

There is a proper stealth section here, as you will need to avoid a number of sleeping moles. Cody’s next transformation is a patch of grass; move it around for may to walk on and minimize noise as you walk around the sleeping moles. There is a helpful noise meter in the center of the screen for you. It is important to note that shooting water with May’s cannon creates noise, so try shooting it in bursts as to not wake up the moles.

Eventually, you are going to have to run away from them in a Crash Bandicoot-like chase sequence where you run towards the camera. The chase will also have topdown perspectives, before a funny bit where you ground pound a mole to get down a shaft, and a finale where moles from left and right come at you. You’ll have to jump in a middle gap to escape, and the moles will hilariously crash into each other.

It’s time to hop around with the help of some frog buddies. This section more than any is more of a traditional platform, with the main aim being to jump on platforms and lily pads while avoiding the purple goo. One slower segment requires May to leave the frog in order to spray water into sprouts, which will raise platforms on fountains for Cody to jump on safely, free of the purple goo in those fountains.

Say goodbye to the frogs, and after finding the Snail Race minigame, go up stone steps to the greenhouse. Cody will have to transform into a mushroom in the soil for May to bounce up of, and she will need to water blue plants to raise three rows platforms for Cody to jump on; coordinate and screenlook, as you can only water one at a time, and the platforms will go limp after a few seconds.

Get ready for a lot of combat in the greenhouse. It isn’t anything you aren’t used to at this point, but keep your guard up. The rhythm of this section is having May clean out purple goo to reveal soil, Cody ground pounding the soil, and moving around to create a bed of flowers. After each of these, enemies will show up for you to dispatch in the usual way. You will do this three times, once on the ground and two times above on tables.

How to defeat Joy in It Takes Two

Your last boss fight will be against Joy, Cody’s prized plant that has been corrupted by this terrible infection. Hilariously enough, Joy will turn Cody into various fruits throughout the battle. But even while rolling around as a tomato, Cody can still attack enemies by dashing.

Poisonous plants will sprout out of the ground, and purple sap will surround them. May needs to wash the purple sap away with her water cannon, leaving an opening for Cody to dash into these plants and defeating them.

After completing a stage of the boss fight, you will have access to fertile soil in front of Joy — water it and Cody can ground pound the soil to temporarily take control of Joy. Cody can button tap to bring the corrupted parts (first her hand, then her back, then her head) of Joy closer for May to hit with her scythe. She will respond by sending giant purple plants who will attempt to crush you; watch for the shadows to know when to dash and dodge.

The next two stages are essentially the same, but with more enemies — and Cody transforming into a lemon and then a lime. Use the same tactics to defeat Joy, and bring her back to her pleasant self.