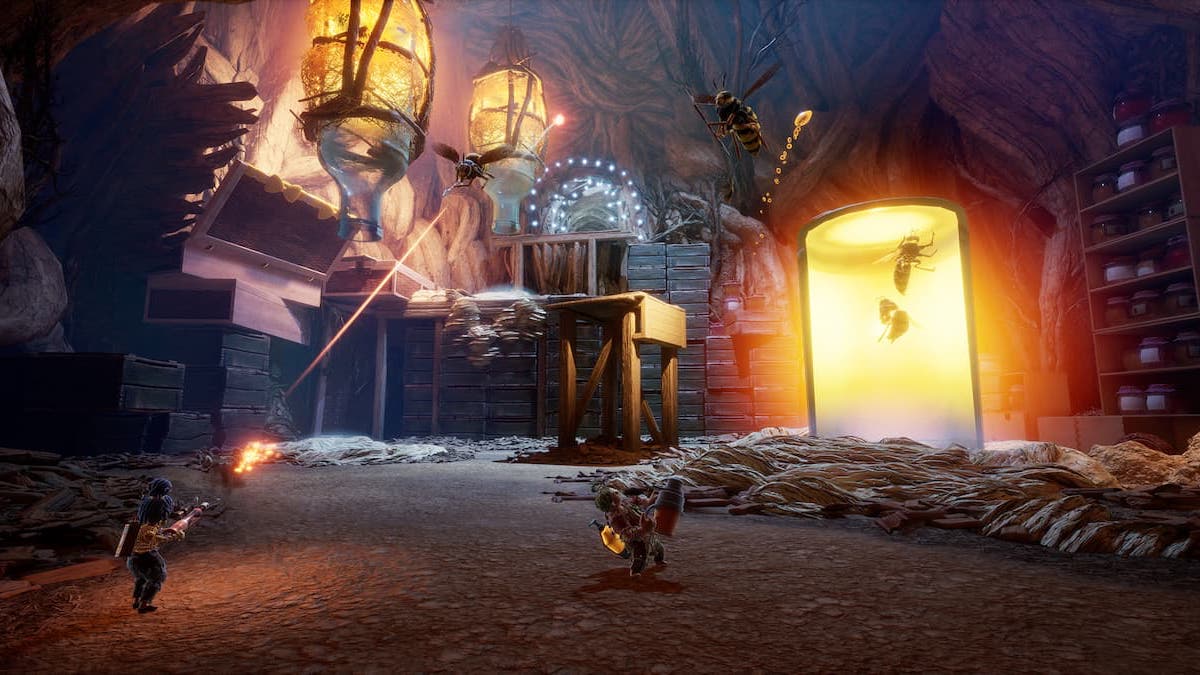 Despite the charm and overall wholesome nature of It Takes Two, the story chapter called The Tree is shockingly dark and violent — albeit in a somehow still charming way. May and Cody become embroiled in a conflict against militarized squirrels and a swarm of wasps led by an imposter queen. The estranged couple is tasked with taking out this queen, armed with a sap gun and Drill Buzzer rifle for some explosive combat.

The initial plan is to reach Rose’s room by going through her open window. You’ll enjoy some fresh air outside the tree, platforming on branches and learning how to swing rope on hooks, which becomes one of the most-often used mechanics in the game going forward. Unfortunately, you’ll be captured by a society of squirrels, who will soon have devious plans for you and your apparent immortality as dolls.

The squirrels will arm Cody with a tree sap gun and May with a “Drill Buzzer” rifle that shoots out matches. The tree sap is explosive, and the matches are the extra ingredient needed for blowing up anything in your way. But by themselves, Cody’s tree sap can be utilized to weigh platforms and other objects down, generally to activate platforms or doors — May can use her gun to shoot targets. You will often use these mechanics together for solving puzzles and traversing the tree. The beginning of the Captured segment will let you practice with these guns.

One puzzle will involve these wheeled platforms — have May stand on an elevator to the right of these wheels, and shoot tree sap as Cody on a weight to the right of that to lift May up. One might think that shooting the tree sap is for propelling the wheel, but it is actually for weighing down one side of the wheel to spin it. Shoot sap on the side opposite of May to turn this wheel from a plus sign to an X; repeat this for the remaining wheels so that May can get across to the left and activate an elevator with her own gun to get Cody up. After that, you can find the Fried Friendship achievement.

You’ll run through a variety of puzzles using the same toolset, such as one with a horizontal lift that requires you to shoot switches to propel the lift forward, or another that has you shoot sap into furnaces for May to blow up and launch Cody upward. In between puzzles, you’ll have bouts with wasps and larvae; dispatch them by shooting sap at them and blowing them up with matches. For the remaining puzzles, keep in mind that Cody can create trails of sap for May to shoot if she can’t reach certain spots to shoot at.

How to defeat the Shield Wasp in It Takes Two

At the end of this section, you’ll get to a metal door that you’ll have to open by weighing down three yellow spots to turn the knob. However, this will activate a boss fight, with a Shield Wasp and its cronies emerging to stop you from getting the door completely open. Luckily, the boss fight is straight forward. You can’t hit the Shield Wasp from the front, so instead pay attention to its pattern of charging at you with its buzzsaw. Whenever you are facing its back after a charge, shoot sap and follow up with matches. Continue to do so, following your usual strategies to off wasps as well.

As you get closer to the wasp nest, you’ll quickly engage in yet another miniboss fight. You will fight the Mortar Wasp after creating platforms by shooting glass bottles that are suspended above you by rope. This fight is even more straightforward than the Shield Wasp; as you can gather, attacks from this boss will come from above, so utilize your roll to avoid attacks and sap and explode away. In the next room, you’ll find the Struck A Pose achievement.

After an exciting chase sequence that involves sliding and swarms of wasps forming shapes and objects, you’ll be floating on the river on a wooden disc. Use Cody’s sap to propel yourselves forward. Then, enjoy a nice surreal sequence involving some glowing fish. Just be sure to keep your balance and stay in the center when you ride the big one.

How to defeat the Giant Beetle in It Takes Two

One of the most frustrating segments in It Takes Two places you on a rising elevator — the camera will be top-down and you will have to survive waves of buzzsaw-wielding wasps charging at you in groups. The elevator will reach its destination: an arena where a Giant Beetle will challenge you in a fight. Avoid its red shockwaves, and take notice of four grates in the arena.

Fill up these grates with sap and lure the beetle near any of them. Once the beetle is close enough, have May shoot the sap to damage the beetle. After defeating the beetle, it will actually team up with you, and you’ll undergo another difficult and fast sequence in which you control the beetle while shooting matches at wasps and sap.

Cody and May will make it into the queen’s nest, but at the cost of the beetle’s life. Now, it’s time to encounter what appears to be a giant wasp mech controlled by an imposter.

Related: How to defeat the Wasp Queen in It Takes Two

If you thought your infiltration deep into the tree was chaotic, wait until you have to actually escape. The squirrels will turn on Cody and May, and they’ll steal their underwear fighter plane to make a getaway. The plane will have a turret, and both pilot and gunner will have to coordinate to spot enemies both in front of and behind the plane.

Because this chapter hasn’t reached maximum weird yet, It Takes Two will segue into a Street Fighter homage. May will have to fight the squirrel general in hand to hand combat; remember that you still have a dodge roll, but don’t feel ashamed if you have to button mash through this hilarious sequence.

Finally, an accident will render the underwear plane into an underwear glider. Control the glider by having both characters physically move side to side in order to turn. There will be one tricky segment where there will be split paths — we found that taking the leftmost path was our most successful route, though it took trial and error. Hitting obstacles, either head on or just with a little side nudge, will result in instant death. Get through this final gliding sequence and you’ll reach Rose’s room, escaping this squirrels versus wasps nightmare once and for all.