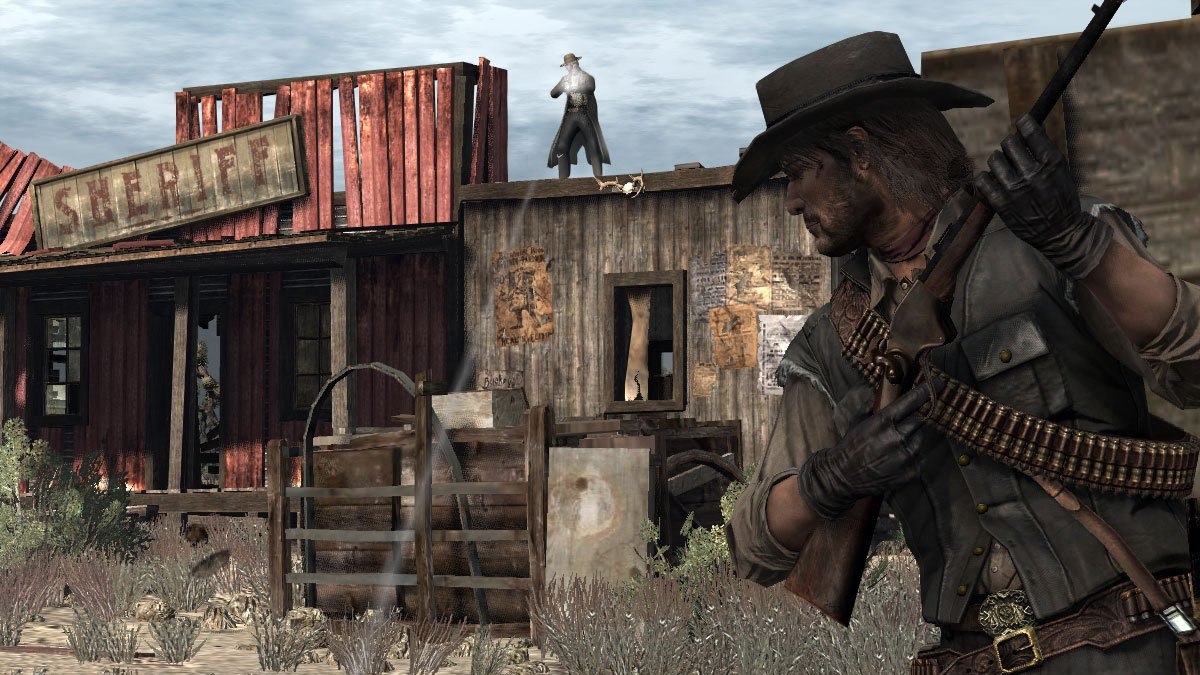 So you’ve slain the dragon, vanquished the bad guy, and now the credits begin to roll. Even at times like this, the music can play a huge role in how the ending leaves a lasting impression on you. You don’t expect God of War to end with a rap song or the latest Grand Theft Auto on some swelling concerto. The last few minutes you spend listening to that one last bit of musical exposition has some serious impact, and some games have used that to their greatest advantage to either set a mood or express one last word from a character’s point of view. Here are the best closing songs, from least to most favorite, in gaming that left an impression when the camera faded out and the credits scrolled on.

Even if this 2012 whodunnit mystery ended on a hopeful note, the despair was not far behind. During the end credits of Danganronpa 2: Goodbye Despair, we’re treated to an original song by voice actress Megumi Ogata, who also provided the original Japanese voice for series protagonist Makoto Naegi and sometimes-villain Nagito Komaeda. Fittingly, the translated lyrics explore the characters’ journey through despair but finding hope during the darkest hours. The final verse is an homage to Nagito Komaeda with allusions to the events of Danganronpa 2 and his motivations for what he did to motivate the main hero, Hajime Hinata, to find any glimmer of hope still when drowning in the darkest pits of despair. The upbeat groove of the song overall is very much fitting of the anime stylings of Danganronpa, but it’s hard to have it any other way.

2011’s Bastion came onto the scene as one of the best independent games of the 2010s and is widely regarded as having some of the best a game’s soundtrack could offer. Composer and lyricist Darren Korb and Ashley Barrett give us a duet that mashes up two songs from earlier in the game, “Build That Wall” and “Mama, I’m Home.” The lyrics are sung in the round with trading of verses back and forth, giving you a sense of a collision of events that have resulted in the choice you made to restore the world to what it once was. There’s a good sense of finality brought forth in this theme in that it gives you a perspective that you’ve arrived at the end, but it’s not a very happy ending.

Kratos’ return to the spotlight in 2018 was quite the comeback. Giving depth to his character and exploring a more vulnerable side of one of gaming’s most gruff antiheroes, the accompanying soundtrack by composer Bear McCreary establishes an epic soundstage fitting of the adventure that came to a climax at the top of Jotunheim, spreading the ashes of Kratos’ wife and Atreus’ mother, Faye. The song “Ashes,” sung in Faroese by vocalist Eivør Pálsdóttir, fits the conclusion of this journey through the Nine Realms quite succinctly. Combining both the gentle vocals and the swelling three-note melody present throughout the entire soundtrack of God of War, Bear McCreary hits several moods as the song progresses from anticipation of a conclusion to closure of a long-unfulfilled wish to a steady sonic journey back to where it all began.

The original Persona 5 ending theme, “With the Stars and Us,” was a much more positive message for its ending, but the expanded edition of this all-time great JRPG deepens the emotions by orders of magnitude. The ballad explores more about the struggles of life and that there is no such thing as a happy ending. Lyrically, it hits you that there is hardship, but the song’s tone gives you a hopeful lifting that carries throughout the themes of Persona 5’s cast and characters. Even in our darkest hours, our own light may shine a little bit to brighten the way forward is the prominent message here. Combining a power ballad structure and hard-driving piano-driving lyrics by Lyn, a prominent jazz singer, this is easily one of Meguro’s crown jewels of his career.

Rockstar’s love letter to the Spaghetti Western film genre, Red Dead Redemption, featured a rather grim ending to a journey wrought with moral conundrums and a question if protagonist John Marston truly got the redemption he was looking for. Appropriate that the developers choose a song with a title like “Deadman’s Gun” that serves as the musical biography of John Marston himself. The somber ballad by indie rock group Ashtar Command gives a lyrical exploration of both John Marston and his son, Jack, and how they’ve been put on the path of violence with a consequence hot on their heels. The song’s tone expresses heavy grief that the subject has been on a warpath and has now caught up to their prey. The question remains, though, was all the fighting worth the trouble?

NieR: Automata – “Weight of the World” by Keiichi Okabe

NieR: Automata was a game that played with expectations and toyed with players’ emotions, and no place is that displayed with some of the heaviest impact on the credits roll during “Ending E” with “Weight of the World.” Not only lyrically does this song express the bond formed between main characters 2B and 9S, but even the mechanics of the credits sequence itself express a kind of burden. The game presents you with a choice to actually sacrifice your save data to help other players during the ending sequence, so they don’t have to face the rather challenging bullet-hell minigame on their own as it rolls. As the song builds and builds, major staff members’ names spew out screen-covering bullet patterns as if they themselves are the boss you’re trying to take down. It’s all a very clever use of themes from the start to the very last second of the activity that you’re facing what seems like an impossible challenge, but you know that you don’t want to give up now.

Final Fantasy XV – “Stand By Me” by Florence + The Machine

The ultimate road trip with brothers in arms calls for one hell of a send-off, so why not do a classic cover of the pop song “Stand By Me” interwoven with the Final Fantasy theme to make the end of that journey hit so much harder? Not only does this song fit the themes of Final Fantasy XV, “Stand By Me” serves as a recurring song in both the opening and ending sequences where the entire adventure loops back around. As the credits roll, we hear some banter between Noctis, Ignis, Gladio, and Prompto and see a collection of the player’s best photos taken from Prompto’s point of view. It’s hard not to get choked up at this one considering the scale of what this story stood for, in both a happy and absolutely heartbreaking collision of feelings. Camaraderie rarely hits this hard.

Widely regarded as one of the greatest closing songs in any videogame, Hikaru Utada’s pop hit “Simple and Clean” was used frequently in the Kingdom Hearts franchise as its overarching theme. First heard at the end of the original game when Sora is forced to leave Kairi at the Destiny Islands, the emotional impact by the placement of this song is another good example of the dichotomy of a happy ending because the person Sora spent the game trying to save is safe, but it’s also a somber conclusion because the star-crossed lovers are left without closure. Even back in 2005, this still felt like a “To be continued…” ending just from the use of this song and how it all comes to a head.

One of the best first-person games where you don’t fire a single bullet birthed many a meme during the late 2000s, but nothing stuck in the minds of gamers as long as the musical middle-finger known as “Still Alive.” By comedy songwriter Jonathan Coulton with lyrics by the voice of GlaDOS, Ellen McLain, this catchy song serves as both an insult to the player-character saying, “You may have won the battle, but not the war.” and as a celebratory anthem of the entire game’s backdrop of tests gone wrong. The happy tone of the lyrics juxtaposed with lines such as “…for the good of all of us, except the ones who are dead” still feels like something GlaDOS would’ve sung when we’re not looking because of the fitting deadpan delivery. For good measure, it even threw in a quick jab to Half-Life, Valve’s other first-person magnum opus, that sent fans into a frenzy, pondering if it was canon or if it a classic breaking of the Fourth Wall that went on to become part of Portal’s own story in the sequel.

Batman: Arkham City – “Only You (And You Alone)” by Mark Hamill

What was originally going to be Mark Hamill’s swan song as Batman’s greatest rival, the Joker, turned out to be his finest performance. We are greeted by one final tape recording of Joker singing an off-key, absolutely haunting performance of the 1950s pop song “Only You (And You Alone)” originally by The Platters. Joker’s raspy voice and lack of tune, even sauntering into a bit of spoken word, make this a haunting send-off to the Clown Prince of Crime that was incredibly on the nose. Joker and Batman, from Joker’s point of view, is that they can’t exist without one another. Joker’s obsession drove Batman to the brink, and even in his final moments, this was the true last laugh. Very rarely does a villain become this memorable with their epitaph to their rival, and this was one for the ages.