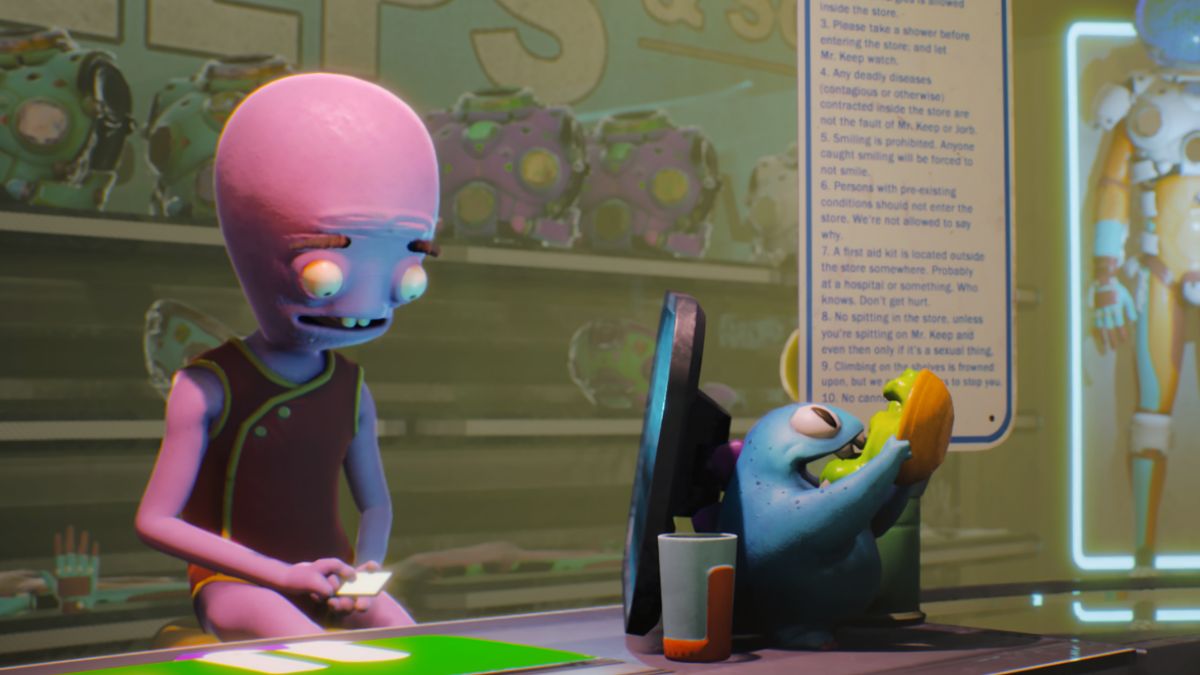 High on Life is one of the strangest, yet most amusing games to come out in a long time. After your planet gets invaded by aliens who want to smoke humans like a drug, you are forced into the role of a bounty hunter as you fight back against the G3 cartel. Your partners are none other than talking weapons who have some pretty foul mouths, but they aren’t the only ones making jokes in the galaxy. Here are some of the funniest moments you will encounter in High on Life.

Dr. Giblets is one of the many bounties you will take on as you try to destroy all the members of the G3. He is a top scientist who is also very difficult to find. After sleuthing around the slums of Blim City and tracking down Dr. Giblets, you open the door to his lab to find that he accidentally killed himself when he went crazy. Instead of a boss fight, you instead get to fight waves of enemies as you listen to a pre-recorded message from Dr. Giblets mocking those who could have killed him.

Stabbing Gene in the gut

Gene is your mentor — he has been there from the moment he gave you your bounty suit and has never done anything to hurt you. Well, he did move into your house and constantly harasses your sister and might be a bit racist, but he is a good guy at heart. It’s okay if you think Gene deserves to leave. After you get your hands on Knifey, he will tell you that Gene needs to be stabbed. When you get back to the house, you can stab Gene in the gut. It won’t kill him, but you do get rewarded with an achievement for doing it.

Related: Can you kill 5-Torg in High on Life? Answered

There is a secret achievement in the game called, “Carried Stan’s Load to Completion.” If you are wondering what Stan’s Load is, well it is a good ol’ gallon of alien baby gravy. After completing your first two bounties, leave your house and hang a left. You will find a smaller yellow alien wearing a trench coat. Talk to him and he will insist on giving you a gallon of his product. If you select yes, he will provide you with this sticky sauce for free. You later get the achievement if you manage to carry Stan’s Load to the end of the game.

You and Kenny will spend a lot of time together as you explore the galaxy and take on the G3. Well, the time has come to take your relationship to the next level and you can do that by learning more about Kenny. Head down to the slums of Blim City and have a relaxing meal as Kenny tells you the truth about how his planet got destroyed all while getting interrupted by a waiter who just won’t get a hint.

There is no denying that High on Life has some dark humor but Slumsley takes the cake and provides a real shock factor if you don’t know about him ahead of time. When you first enter the slums, you will be greeted by a kid who keeps pushing you around. If you bypass him, you will find his mom who will refer to him as a real jerk and say that she wishes he would die. Run back up to Slumsley and Kenny will let you pop him in the head. You also get an achievement for this act called “Fallout Doesn’t Let You do This.” Return to Slumsley’s mom and she will even thank you for killing him.