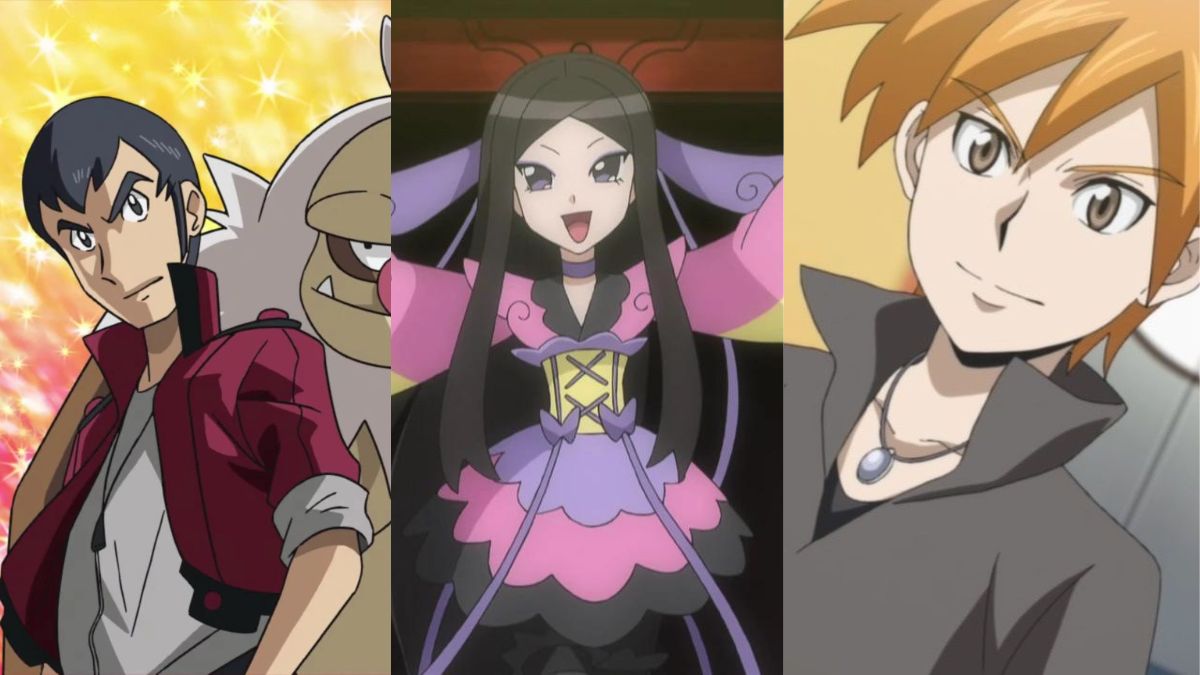 With over 50 Pokémon gym leaders throughout the games and shows, the Pokémon franchise is littered with powerful trainers who challenge and charm its players. Whether you love them for their personality or their skills, the list has been narrowed down to the top trainers in the Pokémon world. In alphabetical order, let’s go through the seven best gym leaders of all time.

The iconic rival of Red himself, Blue is the versatile gym leader of Veridian City that causes anyone who faces him tons of trouble. Not only is his team fully-evolved, but it’s full of powerhouse Pokémon like Arcanine, Gyarados, Exeggutor, and Alakazam. Whether you’re fighting him to test your team or for nostalgia, Blue is a welcome and wonderful opponent.

This is the original Pewter City leader, the first serious opponent you ever face, Brock. The Pokémon world would be wildly different without him. As a friend, he helps Ash and Pokémon fans enjoy the world with fun and full bellies. Meanwhile, as an enemy, he hits you hard with his Rock-Type Pokémon like Onyx and makes any Bug or Grass-Type Pokémon suffer.

As one of the starring rivals in Pokémon Sword and Shield, Marnie is the sister of the current Spikemuth gym leader. She’s stoic and seems a bit villainous at first, but she’s really just an awkward girl trying to rebuild her city. With strong and loveable Dark-Type Pokémon, she brings the power and charm to become an unforgettable gym leader.

Norman is a very unique gym leader, considering he’s the player’s dad in Pokémon Sapphire, Ruby, and Emerald. While he leads Petalburg Gym, he leaves you and your mother behind in a small town. Your confrontation is emotionally unforgettable, but he’s no slouch in a fight, either. His Slaking is particularly annoying, with its large health pool and propensity to use Rest to heal itself and keep the fight going. Be sure you have the stamina to survive him.

Sure, Raihan is a favorite because he’s energetic and fun. But he’s also a rare Dragon-loving gym leader whose biggest threat isn’t using Dragon-Types. Instead, it’s the fact he relies on weather conditions to wear you down. From his iconic style to his tactical battle style, Raihan is the one-in-a-million gym leader from Hammerlocke Stadium. You might as well join his fan club now.

Few Pokémon gym leaders are as actively terrifying as Sabrina. Not only does she have a spooky Psychic-Type team, but she also can telepathically communicate with them. Yes, Sabrina is an actual medium. Once you meet her in Saffron City, you will never meet a gym leader like her ever again. Notoriously hard to beat and carrying a horrific little doll, Sabrina is a true highlight of Pokémon Red and Green.

Over the years, the Pokémon devs have added new game elements and Pokémon types, but few have been so game-changing as the Fairy-Type. Valerie is the first Fairy-Type gym leader you ever meet, who you find in Laverre City in Pokémon X and Y. The direct counter to the previously overpowered Dragon-Type, Valerie and her Fairy-Type Pokémon challenge every player. Her adorable joyful energy and butterfly dress also help make her more than memorable.