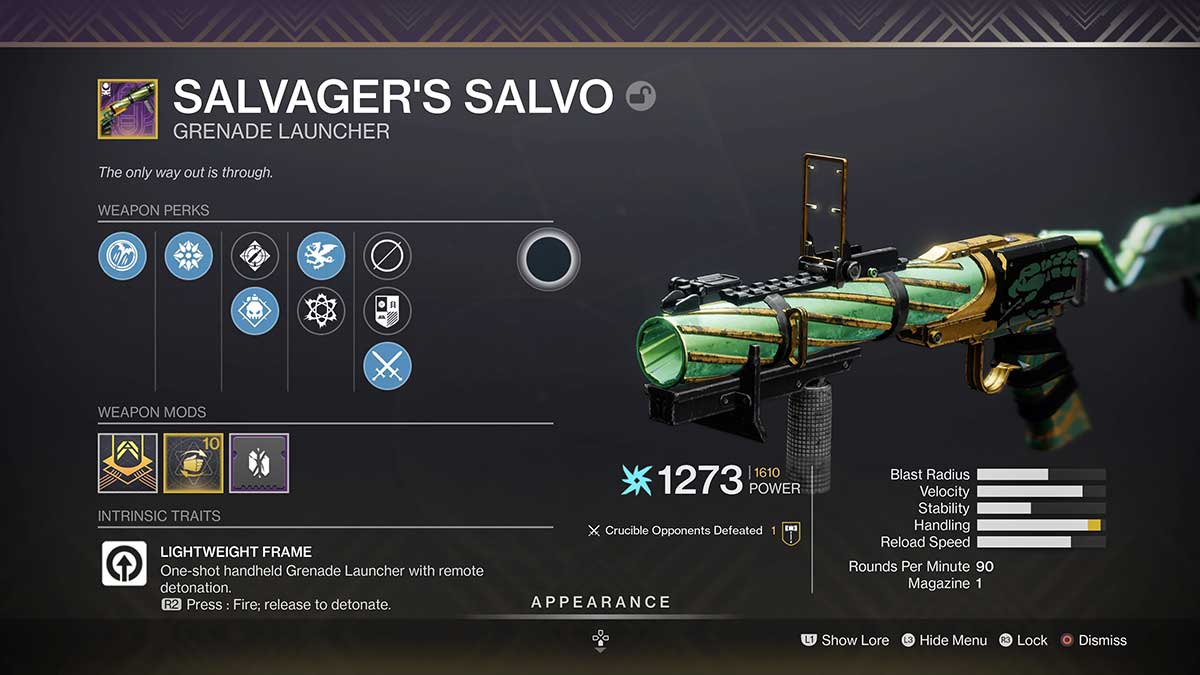 Salvager’s Salvo is a new grenade launcher added to Destiny 2 with Season of the Chosen. Once you’ve completed Messy Business and have your hands on it, you can pick up three separate quests for its three Ornaments. In this guide, we’re going to provide you with some tips on how to get the best-looking one, Toxicology, as quickly as possible.

You pick up the Gambit Salvager quest from The Drifter. To complete it, you have two tasks.

What makes this quest so similar to Messy Business is the focus on grenade launcher kills. If you’re taking this on just after picking up Salvager’s Salvo, though, you’re probably pretty good at getting them by now.

Salvager’s Salvo’s velocity takes some getting used to. Instead of going for long-range lob shots, get in close and kill enemies nearer to you. Sometimes this results in you getting caught in the blast, but it’s worth it for the grenade launcher kills you’ll add to your progression.

While this is the most efficient way to get grenade launcher kills, we didn’t find this to be the toughest part of the quest. Instead, it was banking motes that we struggled with.

Banking motes doesn’t sound too difficult on paper — it’s a normal part of playing Gambit. Though when you’re also trying to focus on getting grenade launcher kills, risking your life with every shot, it becomes a bit trickier.

Every five motes counted as 1% of progress for this part of the quest, from what we could track. Over the course of several matches, you can make a lot of progress.

The best way to optimize the number of motes you’re banking is to deposit every time you head to a new area of the map. It doesn’t matter if you only have four motes — it’ll add progress to your quest.

This goes against the grain of what you feel like you should be doing in Gambit. After all, four motes is one off from sending a blocker. However, you may also lose four motes chasing that last one to put on top.

When we took this approach, we found that our progress rose faster because we weren’t trying to bank enough for a blocker, and we ended up banking more motes in general as a result. A nice side effect of this was that the enemy team didn’t invade as much because they didn’t notice how many motes we’d banked.

The one thing that held us back was other players stealing all the motes before they even hit the floor. Using grenade launchers means that you’ll be getting kills further away from you. The only way to get them fast is to rush towards where they’ll drop. Most of the time, we lost a couple of motes. Unfortunately, this is just a natural part of the teamwork required by Gambit that we’ve all got to cope with.

Use this Ornament all the time

Toxicology has no impact on Salvager’s Salvo, other than making it look good. As you can see, it’s the best-looking Ornament available for this weapon. Once you have Toxicology, we advise using it all the time so that you can stare at this lovely paintwork for longer.