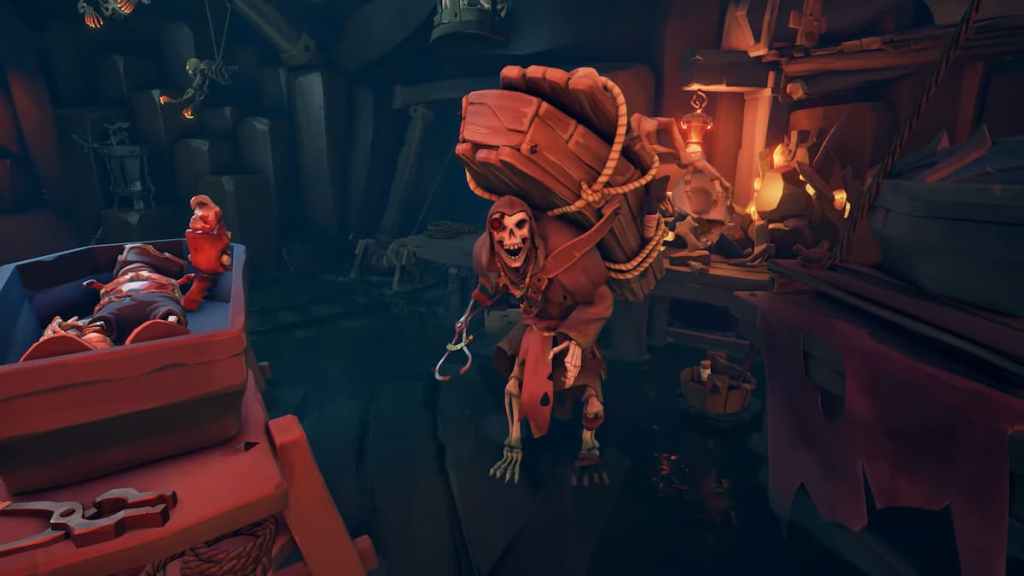 Upon doing the Ritual of the Flame in Sea of Thieves, you’ll have the uncanny ability to equip the Skeleton Curse and sail the sea as nothing but bones. Upon first transforming into your new form, you’ll notice that you’re not wearing a single thing. Perhaps what makes this truly a curse is that you can’t equip any of your existing cosmetics as a skeleton. However, if you find the Bonesmith in Sea of Thieves, you’ll find that he’ll have plenty of wares to offer and make your skeleton all spiffy.

Bonesmith location in Sea of Thieves

After fighting for Flameheart for so long, you should know how to enter the Reaper’s Lair. Go to The Reaper’s Hideout and play “Who Shall Not Be Returning” on the elevator. Once the elevator lowers, follow the long and winding path to the center hub of the lair. Once you reach the central area, cross the wooden bridge across the lava, then take an immediate right instead of going down the center.

You’ll see skeleton cages hanging ahead, and just past that is the Bonesmith’s shop. There will be stacks of coffins everywhere, and you’ll see the shady NPC himself hunching over with a coffin strapped onto his back. You can’t miss him.

All Bonesmith Skeleton Curse cosmetics in Sea of Thieves

As of this writing, there are 28 different cosmetic pieces you can buy from the Bonesmith. These are unlocked for purchase by earning Commendations or raising your Allegiance for Servants of the Flame.