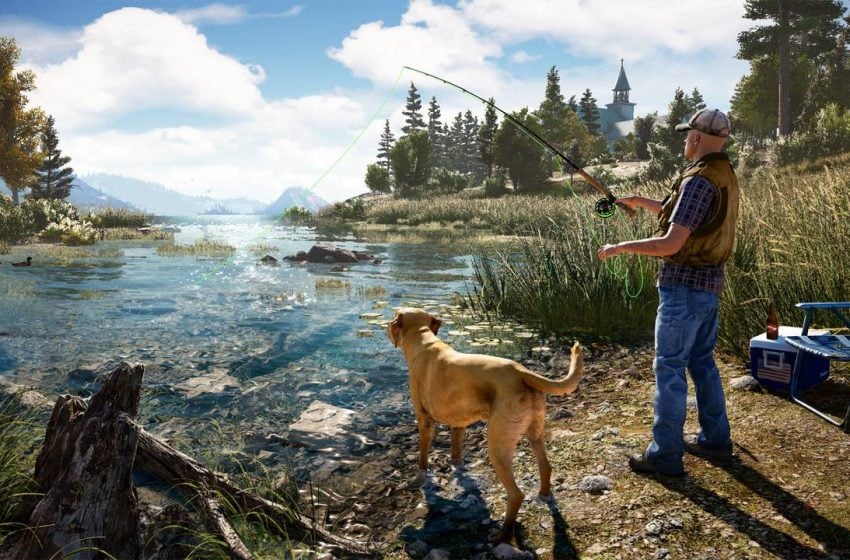 Among the many collectibles in Far Cry 5, such as Prepper Stashes, Cheeseburger Bobbleheads, Vinyl Crates, and Vietnam Lighters, players can collect a total of 12 Comic Books. There are four Zombie Comic Books, four Mars Comic Books, and four Vietnam Comic Books located around Hope County, Montana. This guide will show you the location of each of them, along with full screenshots of their physical location and area on the map.

The Elliot Residence in Jacob’s Region has a Zombie Comic Book on the second floor just after entering via the window. In my case, a bad guy ended up rudely dying on top of it, but it’s there, trust me.

Inside the Jefferson Lookout Tower in Jacob’s Region you will find this Zombie Comic Book sitting on a table. Try to ignore the rather gruesome scene here, but if you progress far enough in the story you’ll find out what kind of horribleness happened here.

O’Hara’s Haunted House in Faith’s Region is a pretty cool location to look for a prepper stash. If you follow our guide, you will find this Zombie Comic Book on the second floor on top of a mattress in the middle of the attic.

Inside the western building at Peaches Taxidermy in Faith’s Region you’ll find the fourth Zombie Comic Book. It’s sitting next to a TV running video of a rather coerced scene featuring Faith and our friend the U.S. Marshal.

The first Mars Comic Book can be found in the Boshaw Manor in Faith’s Region. Calling this trailer a manor may be an overstatement, but there’s also a safe in the bedroom next to the nightstand where the comic is located.

At the Bradbury Farm by the crop circles in John’s Region you’ll find this Mars Comic Book. It is located inside the large barn on the second floor. Climb up there and look for the sitting area in the back. It’ll be on the bed.

At the foot of the eastern mountains in Faith’s Region you can find Camp Cougars. In front of one of the tents there is a Mars Comic Book just sitting there.

Parker Laboratories is home to a bit of a nutcase character. A Mars Comic Book is sitting inside the trailer on the wooden desk. You can also start a mission here to get your hands on a pretty unique weapon.

In John’s Region you can hit up the Boyd Residence for a Vietnam Comic Book, safe, and bow all inside the bedroom. Not a bad spot to loot early in the game.

Near the giant statue in Faith’s Region, the Chan Residence has seen better days. Something terrible has happened here but whoever did it was kind enough to leave behind a Vietnam Comic Book on the bed.

The McNeill Residence is located just off the runway in Jacob’s Region. You’ll have to punch your way through a boarded up rear window to enter the house and find the Vietnam Comic Book inside the bathroom.

The final Vietnam Comic Book of our guide is just inside Faith’s Region in the Vasquez Residence. You’ll get a chance to save some civilians here and then you can pick up the comic from the leather couch.

That covers all twelve Comic Book collectibles in Far Cry 5. Remember, there are many more things to uncover and find in our Guide Hub.