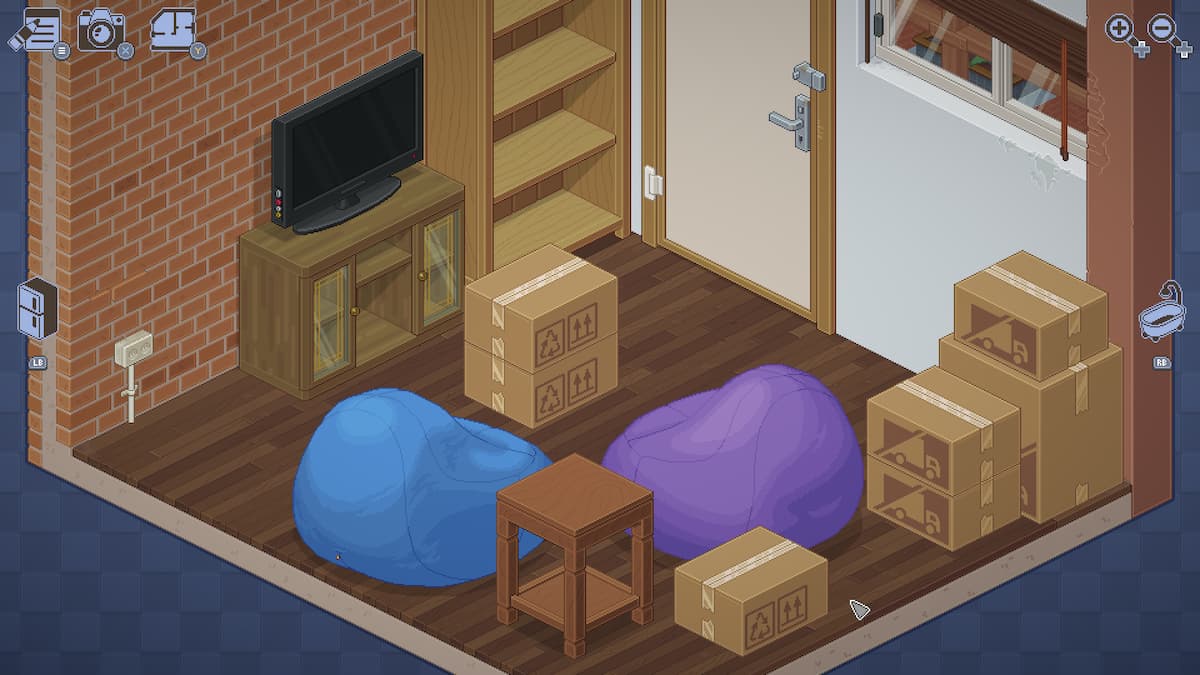 Within Unpacking’s 2013 chapter, players will discover the main character and her partner have now bought their first true starter house. The map details five locations that certainly need some tidying up, as there are several items here that lead you into some struggles. Here is a comprehensive guide of which items will be going where in this next chapter.

The 2013 chapter is where you’ll begin seeing more than five boxes to unpack in a room. That being said, it’s always best to start by laying out items on the floor and mapping where each category of objects should go. For one, pots and pans can be thrown into the cupboards underneath the sink, along with the red strainer. You will be left will one last pan, which should be placed on one of the shelves near the fridge.

Continue with objects that should be on the sink counter, such as the microwave and toaster being in front of the electrical outlet. Then, place various soaps and scrubbing tools around the sink itself. As shown above, drag the menorah, its candles, and a roll of paper towels on top of the fridge.

Once that’s done, set each of the four brown coasters on the dining table and all of the magnets onto the fridge. With some room left over, place the whiteboard on the fridge as well. To finish the room, place all utensils and cooking tools in the drawers, while all other remaining items should be set on the shelves.

As with previous levels, feel free to hang or fold your clothes into the bedroom closet on the left. Although, socks and bras will need to be placed into the purple bins, with each pair of shoes sitting on the floor to the right of it. As for the nearby nightstand, place the blue and orange lockbox underneath, and the purple diary in one of its drawers.

The purple purse and yoga mat found in the last box can be shoved underneath the bed, and any stuffed animals found throughout the house should be sitting on top. With these out of the way, drag the rest of items in the bedroom on to the nightstand.

The living room will be the first location in the game where players are tasked with managing seven boxes. Luckily, the tall bookshelf is where a majority of the items will be placed, such as all books, games, controllers, and toys. However, the Wii, Wii remote, and cable box do need to be positioned facing forward on the TV stand.

Additionally, 2013 introduces items such as the umbrella, cane, and lamp. The umbrella and cane will go into the basket near the TV stand with the lamp required to be set on the small wooden table. The last item to tackle should be the blue hand keychain. This can be attached to either of the walls in the room.

The office is the most straightforward room in the home, with mainly objects seen in previous levels awaiting you. All framed photos should be hung, and the three remaining drawers will need to be pinned to the board above the desk. The box of cords found underneath the desk is to be stored in the white cabinet next to it with the wooden stand propped on top. Once each book is placed on the shelves, gather the rest of the items on the desk.

Related: Where to put every item in 2016 – Unpacking item placement guide

Start off the bathroom boxes by unloading everything onto the floor, as this area is incredibly particular where each type of object is placed. Then begin filling each drawer with boxed items (such as band-aids and medications). For those too large to fit, set these far back under the sink. If done correctly, there should be one last drawer to place the hair iron in.

Next, focus your attention on each hanger attached to the walls. Drape the towels over the ones surrounding the sink and hang the scrubber below the shower head. One of the three toilet rolls will also be required on the rod next to the toilet. Then take the remaining two rolls and any other larger items still out, and put them below the sink.

As any decent human being should, continue by locating the pink fragrance spray and leave it above the toilet. To finish off the chapter, set each everyday-use item, such as the soaps, clippers, brushes, and toothbrush, near the sink or in the medicine cabinet above.