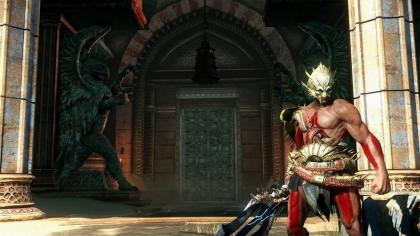 Last week there was a report on the internet that stated God of War (PlayStation 4) is going to GOLD next week. We haven’t heard anything in this regard yet officially, but there are hints that the official announcement is incoming in few days time. What those hints are: 1) Last weekend some never seen before God of War (PS4) in-game screenshots were leaked. 2) 10 minutes of unedited God of War (PS4) video also leaked showing combat and different ways you as Kratos will kill enemies. These screenshots and gameplay video were under embargo which ends March 19, but someone posted them early.

Today, we received a new update which states that Sony Santa Monica is going to show a brand new 20-25 minutes gameplay video of God of War (PS4) on March 19 as soon as the embargo ends. This information comes from Twitter user “Ponds908”. This is what he stated: “Sony Santa Monica Will Show 20-25 Minutes of Gameplay for the new #GodOfWar when the embargo ends on Monday #PS4 #PS4Pro”.

Take this information with a grain of salt because this is the very first time I am hearing some inside information from Twitter user Ponds908 – I can’t call him a credible insider straight away. So let’s wait and watch as March 19 has just started, in few hours time we will get to know whether the information shared by Ponds908 is legit or fake.

Sony Santa Monica Will Show 20-25 Minutes of Gameplay for the new #GodOfWar when the embargo ends on Monday #PS4 #PS4Pro pic.twitter.com/9cnEz01cRX

God of War (PS4) is scheduled to launch on April 20. The game does not feature any type of microtransaction, campaign length is expected to be around 25-30 hours long, will run at 4K Dynamic Checkerboarded Resolution on PS4 Pro. Sony has announced a special Limited Edition God of War PS4 Pro 1 TB Bundle. It carries a price tag of $399 and comes with a Full Customized 1 TB PS4 Pro Inspired By Kratos’ AXE, Leviathan Gray Dualshock 4 Wireless Controller With Insignia and God of War Physical Copy And Digital Content.

We got our hands on to around 17 minutes of new God of War (PS4) gameplay. It is posted in three parts. You can watch them below. If possible, download the videos and then watch it because there is a possibility that it is going to be taken down.