UPDATE: So the download numbers may actually be higher than reported. Analyst Daniel Ahmad had this to say about the report.

This is impressive. But Apptopia’s estimate is lower than the actual results. The claim is 10m total downloads. But Google Play shows the game has been downloaded 10m+ times on that platform alone. When accounting for Apple the total is probably closer to 20m if not higher. https://t.co/gQOFTbielB

The game is a beast with audience numbers, regardless.

ORIGINAL STORY: Nintendo’s Mario Kart Tour has only been out a day, and it’s already making mobile gaming history.

Despite some issues with servers and its elaborate microtransaction plan, the racing game is a massive hit with fans. And, boy, do we mean massive. Apptopia recently posted a new report indicating that the game has already seen 10.1 million downloads worldwide. That’s more than double what Super Mario Run managed to attain during its launch, with 4.7 million.

But, more importantly, Mario Kart Tour also managed to topple the record set by the smash hit Pokémon GO, which launched with around 6.7 million downloads.

Apptopia released a chart to measure the progress of each game, which is available below. As players can see, it had no trouble handling other popular mobile games, including Fortnite. 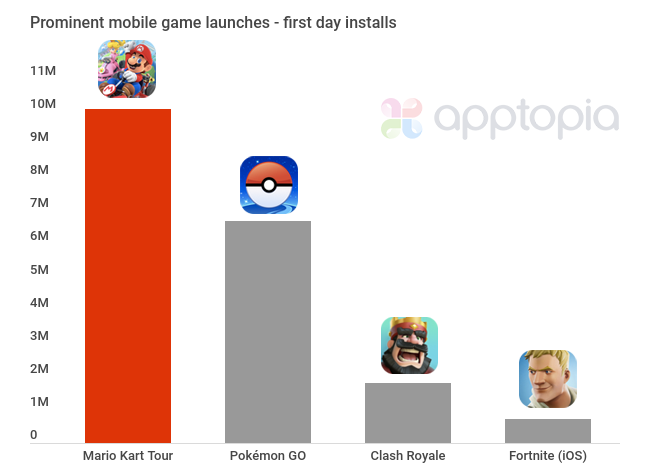 It also compared Mario Kart Tour to other Nintendo mobile releases, in which it has a clear advantage over releases like Dr. Mario and Fire Emblem Heroes. 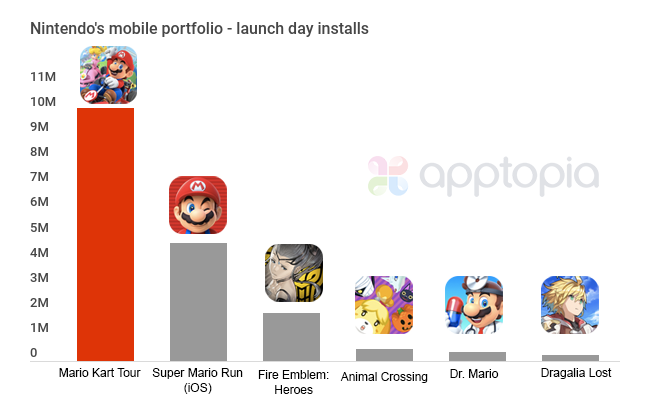 Apptopia also explained how the game became such a hit. “Marketing, pre-orders, and IP. Mario himself is one of the most well known and well-liked IPs in the world. Tapping that vein just a little more, Mario Kart is the company’s most successful franchise, and it’s super fun to play with friends, people of all ages and backgrounds can get down with some Mario Kart. Additionally, the game was highly promoted and marketed (with Apple’s help) leading up to launch.”

Also, it confirmed that the game has hit the #1 overall rank in the iOS App Store across 93 different countries. It’s even gotten pretty good audience ratings, with 4.7 on iOS and 4.3 on Google Play.

So if you haven’t checked the game out yet, join the party! Mario Kart Tour is available now.