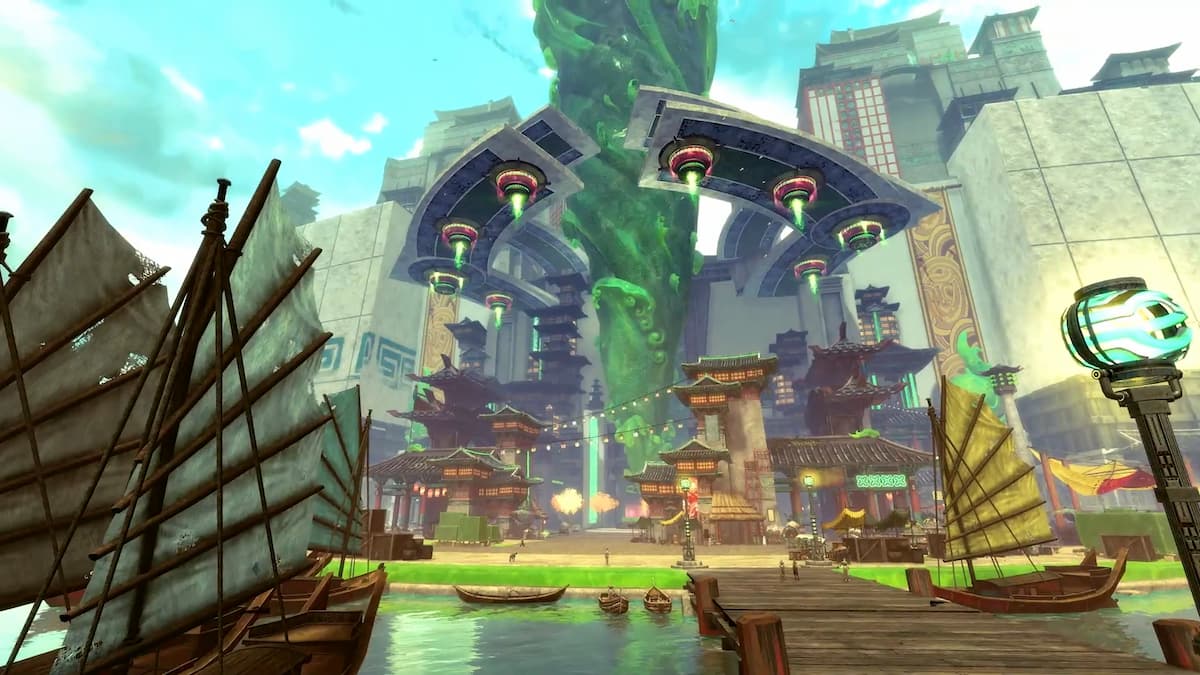 Guild Wars 2 has always been about saving the world, being the hero, and overcoming the world’s most significant challenges to make it a better place. Between slaying fallen deities and hunting down Elder Dragons, there’s little that players haven’t done to become that ultimate hero. From its beginning, Guild Wars 2: End of Dragons incorporates this motif. The Commander is ready to stop the Aetherblades, aid the people of Cantha, and find a way to end the Dragon Cycle once and for all. Guild Wars 2: End of Dragons isn’t just a homage to a hero and guild who have given their whole lives, alongside countless others, to achieve a goal: it’s a waypoint to the future.

Cantha is a vibrant, gorgeous, and overwhelmingly different place from what we know and love about Guild Wars 2. Not just because it’s new and shiny. No, the Canthan region brings with it something different from Tyria’s world. Between the dozens of unique animals, landscapes, and sights, Cantha makes you want to soar through the skies on a mount and do nothing more. I admittedly spent a bit too long staring at the scenery and enjoying this bright new world.

Shing Jea Island, or the Seitung Province as the map is known officially, is a canvas of greens, blues, and pinks as brilliantly hued cherry trees rain petals down in every direction, resting gently on the waters of the channels and rivers. Not even the wreckage of crashed ships, nor the lurking Risen remnants at the shores, can interfere with the beauty of this region. Combined with an appropriately themed soundtrack featuring sounds from across Asia, it’s hard not to get lost as you fish and sail the waters on your Skiff.

Sail across the ocean to New Kaineng City. It’s the fantasy version of a cyberpunk metropolis, a wholly different feeling from Seitung Province. It’s filled with lights and holograms. A massive Jade pillar sits in the harbor — the main entrance to the city. Its curved and carved surface is a testament to a nation that took its pain and traded it for power, literally as Jade Tech litters the map in bright colorful ways.

Flawed beauty of a city that’s more sinister at night

Inside, hidden and safe, is a city that lives and breathes in a way like no other city in Guild Wars 2 does. The citizens loiter, use the Teleporter and Raptor Taxi systems, travel around by Skiff, and even make idle, complaining chatter. For NPCs in an MMO, they are astoundingly alive. Wandering the streets you’ll come across street vendors yelling about their wares, and you can hear the ambient sound of machines and hammers bashing near the walls. Jade Batteries buzz with power, and the Teleporters power up and charge as you step on them. There are animals that you can pet, scattered around the map and waiting for attention. The ever-present news announcements deliver snippets of stories with dry wit. Even the Jade Mechs that guard, entertain and support the populace have personalities, and they’re downright hilarious if you listen close and long enough.

Yet, despite all this, the world around you is a clever mask. It starts to crack as you explore, giving way to something darker, more sinister.

The bright lights of New Kaineng City flicker as you head towards the slums, and the shining city shows its darker side before the lights go out. Corruption and villainy lie around every corner, gangs war with each other, uncaring of the lives they take. Purists seek to drive all that aren’t like them away, and Risen plague the slums, with little care for the people who live there. Yet there are still moments of absolute hilarity that ensues between these dark revelations, moments of red-tape frustration in the big city, or just hearing a quip from an NPC as you rush by.

The expansion brings about a series of new Masteries and mechanics. The most anticipated have been the Jade Bots. Using them in Cantha is a seamless operation — they’re simple to understand and they integrate into the world perfectly. How they’ll fit into the rest of the base game is yet to be seen, but as a part of End of Dragons, they are vital for players. Skiffs are admittedly slower than the Skimmer mount, but they offer a scenic and thematic way to travel, and if you enjoy playing with your friends it can create some moments of hilarity. You’ll want to make sure your best driver is at the helm or you’ll all end up in the drink. Fishing has never been a popular mechanic in MMORPGs but there is something ridiculously addicting about it here. Maybe it’s the world, the music, or the simplicity of the mechanic, but it’s oddly enticing to cast your line out and see what you reel in.

The map Meta events are interesting and offer a large amount of replayability. Similar to the Meta events of the base game, they require strategy and a lot of cooperation to complete. Even then, they’re tough. You’ll need a lot of people on your side or a lot of luck to complete them in time. Later in the game, the Siege Turtle, once you’ve unlocked it, provides a great way to participate in the Meta events across the maps with a friend.

Humor and redemption for some

Guild Wars 2 has always made it clear that the path you take is the right path. The Commander is the hero, the good guy, the foundation of the wall standing between the world and disaster. In Path of Fire, you stopped a mad god. In Heart of Thorns, you removed the Nightmare from the minds of the Sylvari and broke the curse in Maguuma. But meeting the last original Elder Dragon truly makes you wonder if you’ll still be a hero if you continue the way you did before. If what you must do to save the world will change your perception of yourself? Or your perception of your previous actions?

With a host of new characters and some returning old ones, the game has built itself solidly upon friendships and bonds. It doesn’t rush the introduction of characters, nor does it offer you perfect people. They’re flawed, some judgemental, and others gruff and sardonic, but they feel real. The interactions between your companions as you journey, both the superficial and the deep, truly pave the way to cherishing them. Even some of the older characters players have come to resent find a way to redeem and endear themselves.

Guild Wars 2: End of Dragons drags everything players have known under a microscope and pushes the boundaries of what we understand as being a hero. It throws the balance of good and evil on its head. It makes you laugh and in some cases mourn. The bright world, the beautiful sounds, and a vibrant, living region has pushed this game into the future. With all this, and the darkness that’s waiting just out of sight but so pervasive, is this world really worth fighting for? That question might haunt you even as you take in the splendor of the end of dragons.