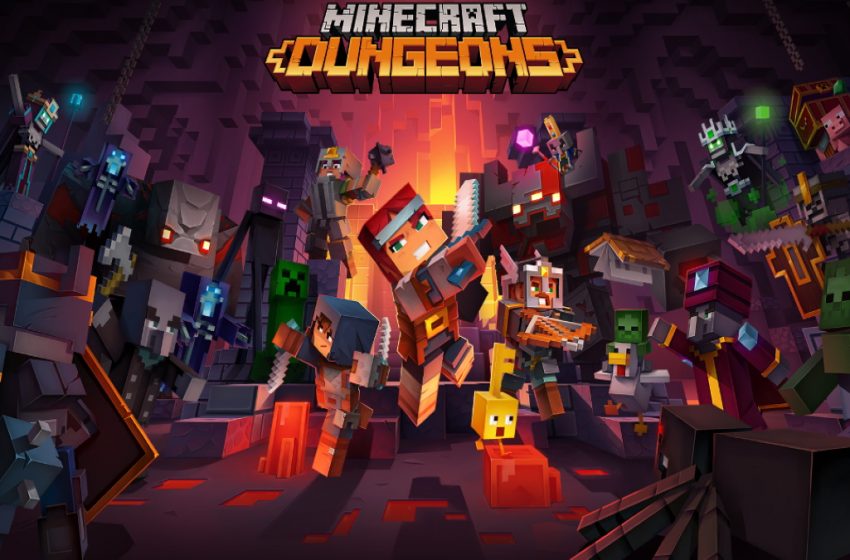 We were as surprised as anyone when we first saw that Minecraft was branching into the hack-and-slash arena. Developed by Mojang Studios (the creators of Minecraft) and Double Eleven (the folks behind the Lego Harry Potter games for the PlayStation 4 and the Frozen Synapse reboot), Minecraft Dungeons is a unique idea that feels a bit like a shoe on the wrong foot. There are plenty of things going for it, from the large piles of loot to the endless swarm of enemies to the creative loop you follow to acquire higher-level gear, but with every step you take, something feels a bit off.

It’s not bad, by any means, but it doesn’t always feel correct. The loop of Minecraft Dungeons and the feeling of new loot is satisfying, but there’s always a small detail that doesn’t feel perfect. It all rounds out, though, when you bring friends into the mix, and suddenly you find yourself playing with them for hours.

Out of the sandbox, into the adventure

You play as the hero who discovers that the Arch-Illager, a dark wizard with a powerful, diabolic crystal, has started taking villagers and using them to help create his endless army. It’s up to you and your friends to traverse the array of locations in the game to attempt to disrupt the Arch-Illager’s plans, while also saving the many emprisoned villagers along the way.

Each mission places you in a new location on the map. None of the environments look the same, and Minecraft fans will easily recognize which biomes inspired each of the missions. For die-hard fans, the small easter eggs and little tidbits of Minecraft lore are fun to find as you attempt to thwart the Arch-Illager’s plans.

The gameplay revolves around completing these missions, vacuuming up new loot, and reaching a higher gear level. Your character has a level associated with them, but this doesn’t matter as much as your gear level. Your character’s level determines the number of enchantment points, which modify each piece of gear. The more enchantments you have, the more unique and robust equipment you can use in the game.

There’s plenty of Survival, but not enough Creative

For many who have gone through other dungeon-crawling games, Minecraft Dungeons feels like more of the same. You fight swarms of enemies, unlock chests, and equip the weapons and artifacts that have the highest numbers. The higher the numbers become, the stronger enemies you have to fight, and the better you loot you can find as you progress through the game. It feels like an extremely safe approach for those attempting to make a Minecraft dungeon-based game. None of it plays with the formula too much, and there are no unexpected twists along the way.

The main factor is how enchantments work, which you earn points for every time you level up. That’s the main difference between each piece of equipment you pick up, too. You may find two swords at the same level, but one may only have two enchantments available while the other can have three, and all of the options are a different power.

That familiar feeling is the reason Minecraft Dungeons feels held back. It doesn’t utilize the unique, creative building perspective of the original game, nor does it try to create something different for fans. There’s a lot of potential for the game, but it feels shoehorned into a genre, rather than something new. As an entry into the hack-and-slash action RPG genre, Dungeons is a great step toward more fleshed-out and unique titles like Path of Exile. But we doubt that was their intention in development.

After your first playthrough of Minecraft Dungeons, you unlock the first of two new difficulties. Much like other dungeon-crawling games, repeating the process gives you the chance to encounter more powerful enemies, new loot, and make your character incredibly powerful. The big problem comes about halfway through your second playthrough. It’s easy to become tired and to feel like all of the loot is recycled—which, don’t get us wrong, it totally is.

There are a handful of new items available to you that you don’t find on the easiest difficulty, but not enough to justify a second playthrough. The loot does have a higher chance to have more powerful enchantments, but by that point, the mobs swarm you extremely quickly, and it’s difficult to fight for more than a few seconds. You spend most of your time fighting them, trying to lure them away into small groups, or waiting for your healing items to cooldown.

It’s a chore that doesn’t change too much from the first level. It’s easy to feel like each level introduces a fun new adventure, but you’re doing the same thing repeatedly without too much change, even if you do it on a harder difficulty.

It’s way better with a buddy

While the game may feel a bit tiring, the adventure is endlessly better with friends. By having another player along for the adventure, the mobs are much more easily managed. You can find yourself assisting one another with your artifacts, and it makes fighting the endless horde of enemies far easier.

There are multiple ways to play co-op in Minecraft Dungeons, from doing it with a friend on the couch to jumping online together. While cross-play is not available at launch, the fact it will come later down the line is exciting for fans interested in bringing their friends over into it. Minecraft Dungeons‘ loop succeeds in making it a fun adventure with friends, even if everything feels a little bit familiar every time you play it.

A delve, or a climb?

Even if things feel a little off here and there, Minecraft Dungeons‘ experience succeeds in making it a fun time for long-time Minecraft fans and those who want to try out a new dungeon crawler. There are a few hiccups along the way, but if you bring a friend with you, everything fits into a more ideal place.

Because Microsoft has made it so accessible, it’s easy to find a friend who can play it, and with a few more tweaks, Minecraft Dungeons can be a great game. Microsoft has the foundation of a substantial experience that can only go up from where it’s started.

Disclaimer: This review was written with a code provided by Microsoft.